Earlier this summer I had the good fortune of meeting Dave Crow and his family. Dave’s father, William A. Crow, served as the pastor of the Ocracoke Methodist Church  from May, 1936 to November, 1938. Sixty years later Rev. Crow recounted his memories of living on the island as a young, unmarried minister. He tells about funeral practices:

To bury somebody on the island was a little different in a way. Some boat builders built a coffin, and the women lined it with cotton and silk, and that afternoon we had a funeral. The hole dug to bury the casket left the top of the casket just level with the ground. To go any deeper than that was to run into the water, and the water would just float that casket right back up to the level of the ground. So we just piled dirt up on it and made a mound.

Rev. Crow then goes on to relate the following story about the one time his mother came to visit:

Miss Bessie Howard (1892-1970) took my mother around over the island. One place she took my mother was to the cemetery, and described to her how when people died on the island, you had the funeral the same day, and you buried the casket just level with the ground. When mother came back after that visit, she started feeling bad, she just didn’t feel good. I think maybe her stomach hurt, her head hurt, she was dizzy, she had all sorts of symptoms. They got so bad I had to call my friend Murray Tolson to see if he would take us to Atlantic…Morehead City…somewhere. I think he took us to Morehead City.

But the interesting thing was that as soon as we got on the mainland at Morehead City, my mother said, “William, would you like to go to a movie?”

Well, evidently what had made my mother feel so bad was hearing that if you died you got buried the same day in a casket that was just level with the ground.

Anyway, Mother never did come back to see me after that.

Ocracoke village comprises little more than 600 acres of buildable land, with about 750 residents.  In spite of the small & circumscribed land mass, and the tiny population, Ocracoke is home to more than eighty cemeteries.

With only one exception, the cemeteries are small and mostly serve individual families.  Scattered throughout the village, most are located near historic home sites, and are generally enclosed by simple wooden fences.  Many are clearly visible from the village roads.  One of the largest, the old Howard cemetery, contains about four dozen marked graves, and is not far from the British Cemetery, the final resting place of four sailors whose armed trawler was torpedoed off shore during World War II.

The oldest grave in the Howard cemetery is that of George Howard, grandson of William Howard, Sr., the island’s last colonial owner.  George Howard died in 1806, and virtually everyone buried there is a descendant of his.  The most recent grave is that of Myra Wahab, who died almost two hundred years later, in 2003.

Between the British cemetery and the Howard cemetery lies the Williams cemetery, surrounded by a waist-high brick wall. Captain David Williams, the first keeper of the Ocracoke village Coast Guard Station, is buried there, in the front row.

Between the Williams cemetery and the paved road, under a thicket of yaupon bushes and myrtles, and shaded by the overhanging limbs of an ancient live oak tree, lie the remains of Augustus Abner McQuire, an Irish sailor who died off shore in 1913.  For almost a hundred years islanders have been wary of walking by his grave after dark for fear of encountering the ghost of the “Old Diver.”  You can read his story here.

On the other side of the Howard cemetery is the tiny Gaskins-Williams cemetery with fewer than a half dozen graves.  At least seven other graveyards are located along the same road.

Unpaved Howard Street, between NC Highway 12 and the School Road, is well known for the many family graveyards that line the lane.  This is where William Howard, Sr.’s other grandson, William Howard, III, lived and raised his family.  At least five generations of Howards are buried there, along with Ballances, Braggs, Garrishes, and others, most of whom had intermarried with the Howards.

The oldest grave on Howard Street may be that of William Howard, III, who died about 1823.  Although his wooden marker has long since rotted away, the family still knows where he and his wife are buried, near a large live oak in the center of the cemetery.

One noteworthy grave on Howard Street is that of Edgar Howard.  Edgar was an accomplished banjo player who made a name for himself in New York City and other metropolises in the 1920s & 1930s.  He and his brother, Walter, played the vaudeville circuit with stars such as Gene Autry, Milton Berle, and Al Jolson.  In retirement, Edgar returned home to Ocracoke, and entertained his neighbors with stories and songs.  His tombstone has a banjo engraved on it, along with the words, “You ain’t heard nothing yet!” 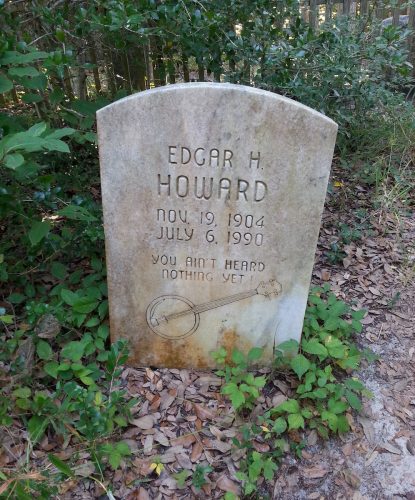 Unfortunately, many of the oldest graves on the island have become overgrown with briars and underbrush, and the wooden markers destroyed by weather and insects.  Others near the water have washed away as wind and waves have reshaped the island shoreline during hurricanes and storms.

Not all of the island cemeteries are visible from the road.  Many are tucked away on wooded hummocks, or are hidden in back yards.  If you wander the out-of-the-way paths and sandy lanes of Ocracoke, or visit neighbors in the historic village, you are bound to stumble across graveyards now and then.   They can be a rich source of island history and genealogy.

Sometimes graves are arranged in clusters.  Sometimes a single marker pokes out from the bushes.  Occasionally you will encounter a hand-made marker with names and dates crudely traced out when the concrete was wet. Most have fences and gates.  Some stand forlorn and alone.  If other family members are buried nearby their markers are gone.

Before the mid-1950s, when the state of North Carolina took over ferry operations across Hatteras Inlet, Ocracoke islanders were accustomed to handling death and dying as a community, without professional assistance.

When a member of the community died family members and friends came to help.  In addition to offering comfort to the bereaved family, neighbors pitched in to make funeral preparations.  One of the local carpenters was called to build a coffin.  Islanders often kept pre-cut casket boards stored under their house, or above the rafters in an out building.

Local women would line the casket with silk or satin.  Neighborhood men took shovels and opened a grave.  The body was washed & cleaned, and dressed for viewing.  Silver dollars were sometimes placed over the deceased’s eyes.  Family and friends would sit up all night with the body, a custom that sometimes led to tall tales of haunting spirits and ghosts.  The funeral was generally held the next day in the Methodist Church.  Interment was immediately following, usually in a pre-existing cemetery on family land.

Over the years a number of bodies have been disinterred.  For one reason or another, family members have sometimes thought it best to move bodies from one location to a different one. In years past this was always a family decision.  Isolated as Ocracoke was, no one thought it necessary to contact authorities.  The men would simply take shovels to the graveyard and dig up the casket (or just the bones if the grave was old), and move the remains elsewhere.

It wasn’t always residents who were buried on the island.  Old Diver and the four British sailors are only a few of the many seafarers who met their end on or near Ocracoke.  Over the course of several centuries numerous wrecked ships have deposited their dead upon our beaches. Most were buried in the dunes in unmarked graves near the site of the wreck.  Seldom were they buried in wooden boxes.  In the aftermath of a disaster at sea most of the dead and drowned were wrapped in sailcloth, blankets, or quilts and laid to rest on higher ground with a minimum of ceremony.

In the mid-1940s Amasa Fulcher began selling professionally built caskets from the Community Store.  He kept two adult, and one child, casket in stock at all times.  No longer was it necessary to keep casket boards at home.  At least one set of boards originally intended as a coffin was made into a dining room table.

Another innovation, begun in 1938, was the establishment of the Ocracoke Burial Association.  For a twenty-five cent membership fee, annual dues of ten cents, and a contribution of twenty-five cents at the death of any member, anyone who had been a resident of the island for at least ninety days could ensure that his or her family would receive a small amount of money at the time of death.  There are over four hundred members of the Association today, and contributions at a member’s death have been raised to fifty cents.  Although two hundred dollars (more or less) is little more than a token nowadays, most islanders participate in the Burial Association because it helps keep that old-timely sense of community alive.

By the late 1950s and early 1960s almost everyone on the island began using the services of Twiford’s Funeral Home, based in Elizabeth City, NC.  With the newly initiated ferry service across Hatteras Inlet, and a paved road the length of the island, it was now possible for Twiford’s to bring their hearse to Ocracoke.  Bodies were taken off the island for embalming, and were brought back home for the funeral and burial.

Eventually Twiford’s established a funeral home on Hatteras Island.    Ocracoke has no funeral home.  Many burials are still made in family plots, however.  But island residents, realizing that small graveyards were nearing capacity, established a large community cemetery in the early 1960s.

In the late 1990s an effort was made to revive Ocracoke’s traditional, community oriented funeral and burial practices.  Simple homemade pine caskets were built, and several islanders were laid to rest without benefit of embalming or other professional services.  Because of a number of practical considerations, including the desire of off-island relatives and friends to attend services (which made immediate interment impossible) and the number of people & amount of work required to effect a “simple” island burial in the late twentieth century, the practice was quietly discontinued.

Today almost all deaths on Ocracoke are handled by Twiford’s, with the help of local associates, who serve islanders with dignity and professionalism.

Someone noted not long ago that on any given day on Ocracoke Island there may well be more dead people here than live ones.  In addition to the thousands of people laid to rest in our eighty cemeteries, no one knows how many Indians, pirates, slaves, sailors, and others are buried in unmarked graves the length of the island.

Perhaps you should walk warily down our dark and deserted streets after dark!  Who knows when you might come face to face with an island ghost from years ago.