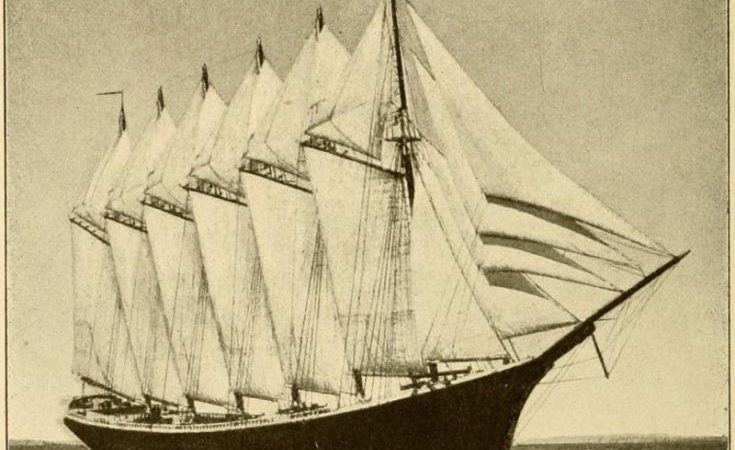 She was a beautiful sight. At 325 feet long (302 feet at the keel), 48 feet at the beam, and weighing 2,970 tons, the six-masted coastal schooner, George W. Wells, was one of the largest wooden sailing ships ever built. Her frame was entirely of white oak; her six inch planking, hard pine. Her garboards (the first strake of planks laid next to the keel) were eight inches thick.

According to a contemporary account, “the six lower masts are splendid sticks of Oregon Pine, each 119 feet long…. The cabins and staterooms are finished in ash, sycamore and cherry, and supplied with steam heat, baths, hot and cold water, electric bells and a telephone line to the galley and engine house.”

The Wells, built for John S. Crowley’s Coastwise Transportation Company at the Holly M. Bean shipyard in Camden, Maine, at a cost of one hundred and twenty-five thousand dollars, slid down the ways and into the harbor on August 14, 1900 as ten thousand people looked on. 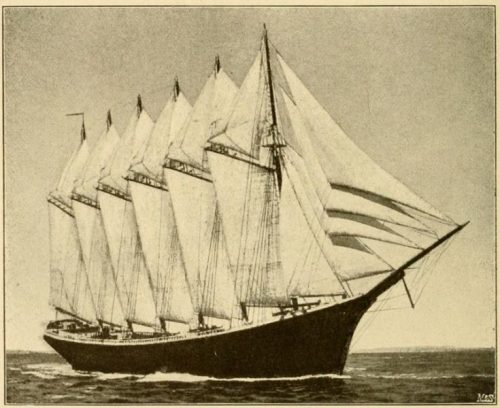 The schooner was named for a fifty-four year old entrepreneur/investor who was born on a farm in Southbridge, Massachusetts. At the age of eighteen he had secured a job in the Robert H. Cole & Co. optical shop where he quickly distinguished himself as a mechanical genius. By 1869 he had advanced to partner. In that year he became one of the incorporators of the newly organized American Optical Company. Three years later he became General Supervisor; then Treasurer in 1879. In 1891 he was elected President of the corporation.* 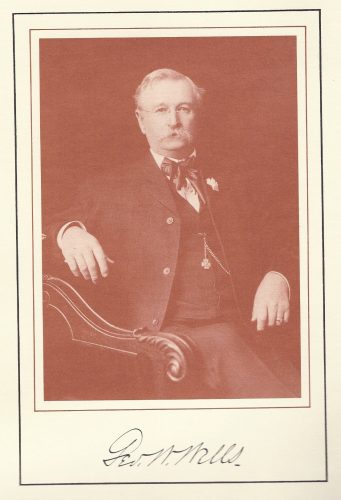 The ship’s christening ceremony was performed by George W. Wells’ daughter, Miss Mary Elizabeth, who “scattered white roses upon the bow of the vessel as she started down the ways, and at the same time let loose a flock of white pigeons.”

After the ceremony the young society women of Camden sponsored a dance in the Opera House.

Reports of the day indicate that “every arrangement aboard ship…[was] on an improved plan.” Both the captain’s cabin and the crews’ quarters were “models of neatness and comfort.” The Wells was constructed, as so many other coastal schooners, for hauling lumber, coal, and other merchandise. Sailors aboard employed modern steam machinery to hoist her cargo between ship and dock.

Before her commissioning, word spread among the sailing community that the traditional designations for the names of her masts would be replaced by numbers or days of the week. Her skipper, Captain Arthur Crowley, the owner’s brother, would have none of that. The Wells’ masts, he made clear, would be foremast, mainmast, mizzenmast, spankermast, jiggermast, and drivermast.

Old salts who had heard of the plans to build such a large vessel shook their heads and declared that she was doomed to failure. Too large and cumbersome, they thought, the Wells would be unwieldy in port and difficult to control at sea. They were largely mistaken. Nearly as fast as a coastal steamer, but considerably less expensive to operate, the George W. Wells, with twenty-eight sails, proved to be a formidable and economical vessel. One writer noted that “while she is a large vessel, she is also a handsome  craft being much the best looking of all the large schooners afloat. Her great length takes away every appearance of bulkiness, and so she looks like an immense yacht, with her sharp bows, clean run aft and graceful lines all over….”

Ironically, in June of 1901 the Wells collided with the Eleanor A. Percy (launched October 10, 1900 in Bath, Maine), at the time the only other six-masted coastal schooner. Neither vessel was seriously damaged.

For thirteen years the George W. Wells plied the Atlantic Ocean between ports as far north as New England and as far south as Cuba. On September 3, 1913, en route from Boston, Massachusetts to Fernadina Beach, Florida, the Wells was driven into the breakers on Ocracoke Island by hurricane force winds.

A Painting of the George W. Wells: 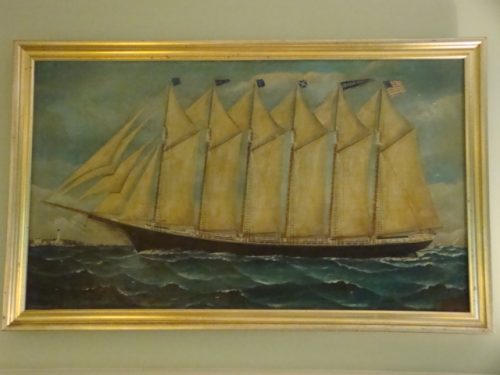 The storm struck the island just after daylight, roaring in from the southeast at 90 – 100 mph. Small boats, steamers, and sailing vessels were no match for the hurricane. The British steam ship, Glenaen, grounded in the breakers near Ocracoke’s south point. For two hours the crew of the Ocracoke Life Saving Station battled wind and tide to approach the Glenaen. After being forced to abandon rescue attempts by surfboat, Keeper Williams ordered horses hitched to the beach cart. Tide water swirled under the cart up to the axle. By 10:30 a.m. the tide receded, leaving the Glenaen “high up on the beach” and out of immediate danger.

As the life savers struggled to help the Glenaen they watched a water logged six-masted schooner being blown down the beach with distress signals flying. All of the George W. Wells’ sails had been torn away, and she was leaking badly where seams in her hull had opened.

Captain Taylor of the Glenaen decided that he and his crew of 23 would remain on their vessel, so Keeper Wiliams and his crew turned their attention to the Wells, and followed the schooner for eight miles.

As the schooner approached the shore Captain Joseph H. York ordered her anchors lowered, but the chains parted, and the Wells was driven onto the beach near the present day pony pen.

Surfman Roscoe Burrus at the Hatteras Inlet station had also spied the Wells. Well aware of the difficulty of attempting a rescue in hurricane force winds, Keeper Barnett requested assistance from Durant’s Station on Hatteras Island. Crews from all three stations arrived at the wreck between 3 p.m. and 4:30 p.m. Reports indicate that they participated in one of the most daring and courageous rescue operations ever recorded.

Surfmen from the Hatteras Inlet station had harnessed ponies to their beach apparatus cart which was heavily loaded with breeches buoy, pulleys, sand anchor, various sizes of hemp line, brass Lyle gun, and other equipment. The sea tide was rushing over the beach, inundating the cart as every wave passed by. After two miles the ponies balked and refused to continue. Without hesitation the surfmen hitched themselves to the cart and pulled their equipment the remaining six miles, often in water up their waists and through quicksand, to the site of the wreck.

Keeper Barnett’s first two shots from the Lyle gun fell short of the Wells. He fired five more shots, but none succeeded in getting the breeches buoy to the schooner. The last line parted as it was being hauled to the vessel.

Finally Captain York tied a line to an empty oil barrel and sent it adrift. After an hour the life savers were able to reach the barrel by wading into the sea up to their necks. Soon afterwards they were successful in sending the breeches buoy out to the stranded schooner. Captain York secured the hawser high up on one of the masts, and signaled that he and his crew and passengers were ready to abandon ship.

By 11 o’clock that night all 26 people (20 crew members, three women, and three children) and a large Saint Bernard dog were brought safely to shore. One of the passengers was barely able to keep his two year old child’s head above water as they were pulled to safety. Captain York was the last to leave his crippled ship. He carried the Saint Bernard and a red lantern, the latter of which he dropped into the ocean just before landing on shore.

Just over a week later the once grand George W. Wells was sold at auction for a mere $800. Shortly thereafter the Wells was set on fire and burned. For years, remnants of the George W. Wells were visible on the beach at Ocracoke. In recent times a section of a long ago shipwreck, more than 75 feet long and more than 15 feet wide, is sometimes exposed north of the pony pen.

The Remains of the George W. Wells? 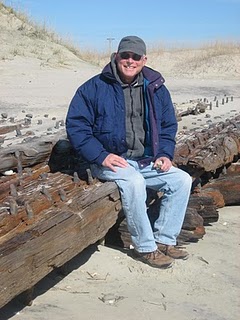 No one knows for sure, but many believe it is the last of the George W. Wells, a silent reminder of the days of sailors and sailing ships, and the brave and courageous life savers who watched over our shores.

In the 1920s the three Wells brothers began collecting antiques. In 1935 the Wells Historical Museum, a non-profit educational corporation, was legally organized and established. Just one year later plans were drawn up for the creation of a typical New England village (1790-1840) on the site of George W. Wells’ home on Main Street in Sturbridge, Massachusetts. In 1946 the enterprise became “Old Sturbridge Village” and was opened to the public. Today it is one of the country’s largest living history museums. You can read more here: http://www.osv.org.

Many thanks to Kathryn Wells for information about her husband’s family, and for the photos of George Washington Wells and the painting of the schooner George W. Wells.