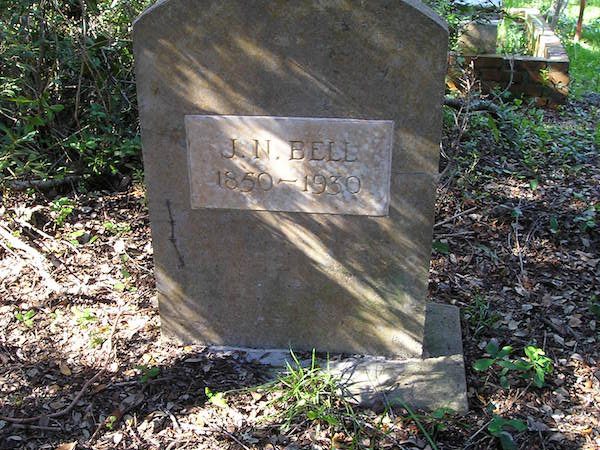 “A token of death,” an Ocracoker might exclaim, on hearing that a neighbor or family member had a disturbing dream.  Perhaps the dreamer watched another person in the village dying or lying in a casket.  Or maybe someone dreamt of his or her own death.  Or perhaps she simply dreamt of graveyards or tombstones.

A token of death need not be a dream, however.  Any unusual sign or symbolic warning can be considered a token of death by islanders.  Oftentimes the unusual sign is only recognized as a harbinger of death after the unfortunate event.  Walt Wolfram in his on-line article, “Dialect in Danger” (see his website) cites the crowing of a rooster in the middle of the day as a possible token of death, and notes that the phrase has been in the English language for centuries.

I understand that in Cornwall, on the southwest coast of England, “tokens” or warnings of impending death were in general acceptance by the populace until about 75 years ago. For Ocracoke natives, many of whose ancestors hailed from the British Isles, the term is still in use.  Islanders are even today likely to take note of a perceived connection between any unusual occurrence and a subsequent death in the community.

Dale tells of the time his grandparents were sitting quietly in their parlor.  Without warning they heard a loud clattering on one of the outside walls.  It sounded as if the clapboards were being ripped off of the house.  Dale’s granddaddy went outside to investigate, but did not discover anything amiss.  He could find nothing that would have made the unusual noise.

The next day Dale’s grandmama received word that her nephew, a sailor aboard a clam boat working out of the Chesapeake Bay, was lost at sea.  The vessel had broken apart, and had sunk in rough seas.  On hearing the news they remembered the odd clattering of boards the day before.  Nothing could convince them that they had heard anything but the clam boat breaking apart.  It was a classic “token of death.”

On another occasion Dale’s great-grandfather heard a clanking of metal on his back porch.  Again, on investigation he discovered nothing out of the ordinary.  What he didn’t know was that at that same moment an elderly neighbor had fallen against a wood cook stove and died.

In those days funeral preparation and grave-digging were community affairs, not professional undertakings.  After services at the local church the deceased was carried to the family graveyard and interred.  Neighborhood men dug the grave and filled it in.

When their work was complete the men returned the shovels to where they had gotten them….to the back porch of Dale’s great-grandfather.  They tossed them onto the porch, making a distinctive clanking sound as the metal parts hit against one another.  Immediately Dale’s granddaddy recognized the sound.  It was identical to what he had heard the day before.

One of my favorite island “token of death” stories was told to me by Larry Williams.  I call it the “Dream of Death” and I retell it in the May, 2001 Ocracoke Newsletter.  You can read it here.

Another unusual island phenomenon occurred in 1923, when my grandfather, Homer Howard, was patrolling the beach as a US Coast Guardsman.  The last vestiges of day were disappearing from the western horizon.  Crimson reds, firey yellows, and bright oranges had morphed into deep blues, royal purples, and an ever advancing canopy of blackness.  Stars were peeking through the darkening sky.

Homer was on his horse, riding slowly, when he saw a ball of light low in the sky ahead of him.  He slapped his steed on the rump, but try as he might he could not catch up to the light.  The faster his horse galloped the faster the light moved ahead of him.  Eventually the light turned and advanced toward the village.  At the edge of the settlement Homer watched in awe as the ball of light entered the second story window of an ailing neighbor’s house.

Immediately Homer rode home to share his experience with his wife, Aliph.  Talk of tokens, warnings, and death dominated their conversation as the coal oil lamp on the kitchen table cast unsettling shadows on the bead board walls.  Sleep came slowly that night as concern for their neighbor grew.

The unwelcome news arrived early the next morning.  Bunia Foster, who lived in the house visited by the ball of light, had died during the night.  The news came as no surprise to my grandparents.  For generations Ocracokers had known that mysterious balls of light often accompanied dying souls.

In 1710 Baron Christoph von Graffenried, a leader of Swiss and German Protestants, established the town of New Bern in Bath County. This eastern North Carolina town is located at the junction of the Trent and Neuse Rivers.   It displaced an American Indian town named Chattoka.

In September of 1711 the local Tuscarora Indians captured Baron von Graffenried along with surveyor John Lawson and two African slaves. Lawson foolishly argued with the Indian chief, Cor Tom, and was promptly executed. Von Graffenried and the slaves were spared.

In Christoph von Graffenried’s “Account of the Founding of New Bern” (23 October, 1711), which can be found here, the Baron recounts the following story about Tuscarora customs and a mysterious “fire or flame” that accompanies a dying woman.

“In their burials they make more ceremony than in their weddings or marriages. And I have observed something strange at the burial of a deceased widow. I will not expand much on it here because there are many printed accounts of the life and customs of the Indians; only in passing, what I found most strange.

And principally; when an Indian is sick or dying their priests come into the house, go through all sorts of figures or antics, make all sorts of conjurations and give to the sick also all sorts of medicines. If that does not help they blow their breath into the mouth of the sick with a frightful roaring, and I do not know what all conjurations. If the sick one arises there is an indescribable rejoicing, but if he dies a sad howling, enough to frighten one.

They make their graves with great care, and arch them over with bark. When the deceased is carried to the grave two priests stand there and lament and make a funeral sermon after their fashion. If there is anything to be gained they extol the deeds of the departed or comfort his relatives and make, I do not know what all strange conjurations. In short there is much action and chattering so that I have seen the priest or conjurer all in a sweat, but this happens if a good present is to be expected. When this is all over the heirs give to the priest pendants of wampum or made of mussels. These are little things like corals, as has been mentioned above, white, purple, yellow; and this is their pay. N. B. The Indians are accustomed to make out of these things trousers and necklaces, and they know how to knit and to weave them so skillfully and ingeniously through one another, with all sorts of figures, that it is to be wondered at.

When it was done and the grave covered over, in my time something marvelous took place which I myself saw. A pretty fire or flame of about two candle light size went straight up into the air, as high probably, as the longest and tallest tree, traveled again in a straight line over the hut of the deceased and so farther over a great heath, probably half an hour long until it disappeared in a forest.

When I saw this and evidenced my astonishment, the savages laughed at me, as though I ought to know that this was nothing new to them, but did not want to say what it was. After this I asked several about it. No one could say positively, but they set much store by it and it is considered an especially good sign for the deceased. An artificial fire it cannot be because of the duration and great distance it traveled. Physically it might be considered a sulfurous vapor out of the earth; but this long regularity is too much for me.

Once when I was at Governor Hyde’s in the presence of the council and many others while we were busied with the Indians about the peace, I took notice of an old Indian who looked to me like a conjurer or priest. So I asked him what that was which I have just related to have seen. Among twenty-five Indians that were there only this old one besides one other could give me an account of it. But it seemed to me like a fable.

They said that only great men, old experienced priests, could see and do such things. When I questioned them further, they gave me for an answer that this little fire is the soul of the departed, which goes into another good creature, if the person has lived well and behaved himself; if he has not behaved well it goes into a villainous smoke and into an ugly and miserable creature. The priests come to their art in the following manner; namely, it happens that a subtle little fire or flame shoots from one tree into another, but very seldom; and when an Indian sees that he must run as fast as possible to catch it, and if he catches it, it goes right on and becomes a small wood spider which jumps and runs so quickly in and over his hand that it has to be seized quickly by the other hand. But if he finally catches it, this spider grows and becomes like a mouse; and so who ever catches this wonderful thing afterwards becomes the best conjurer or magician and can do all sorts of wonders. N. B. These artists or conjurers as they are called in English, have the faculty of invoking the devil and sending him away again.”

Many strange and mysterious “tokens” have been recorded in eastern North Carolina, the Outer Banks, and Ocracoke Island.  They continue to fascinate, intrigue, and concern native islanders, perhaps with good reason.