The following story is based on the Wreck Report submitted by Keeper James W. Howard of the US Life-Saving Service about the wreck of the Richard S. Spofford on Thursday, Dec. 27, 1894. 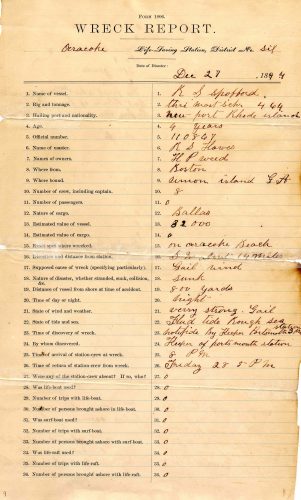 (Quotations from the Wreck Report in the following story are edited for spelling and ease of reading. A full transcript, with original spelling and punctuation, follows the story.)

On December 22, 1894, the three-masted schooner, Richard S. Spofford, set sail from Boston, Massachusetts bound for Darien. Georgia. Four days later, off the Outer Banks of North Carolina, the Spofford encountered gale force winds and extremely rough seas. The schooner, under the command of R. S. Hawes, was struggling to remain on course as the winds continued to rage. Captain Hawes feared “loosing the mainsail” on an “offshore track” so he reduced sails and hugged the coast. It was a tragic error. In the early morning hours of December 27, the Spofford ran aground on the outer bar about 800 yards off the Ocracoke beach.  Although the Spofford was within sight of the village, she was fourteen miles from the Ocracoke Life-Saving Station at Hatteras Inlet.

Fortunately for Captain Hawes and his crew, Keeper Ferdinand G. Terrell, the newly-appointed keeper of the yet-to-be-manned Portsmouth Island Life-Saving Station, just a few miles across Ocracoke Inlet, had stepped into the station’s cupola at daybreak. He immediately spied the Spofford lying disabled with distress signals flying from the top mast.  In spite of not having a trained and seasoned crew, Keeper Terrell was successful in recruiting six local men to launch the surfboat and proceed toward Ocracoke. They arrived at the village at 11 am, and tried to recruit more volunteers to attempt a rescue. By this time the surf was “very high” and “breaking all over the schooner.”  The unequipped islanders understood the foolhardy nature of such an attempt and refused to participate.

The Spofford was manned by seven sailors in addition to the captain. Fearing that help was not forthcoming, around noon five sailors launched the schooner’s yawl boat and began rowing toward shore. The yawl almost immediately capsized, but “all got to the beach by the assistance of the citizens of the island.”

Keeper James Howard and the Life-Savers at Hatteras Inlet had been alerted that a schooner was in the breakers near the village. Howard immediately mustered his six-man crew, hitched mules to the 1000 pound “beach cart” loaded with the life-saving “apparatus” (including various sizes of hemp line, shovels, Lyle gun, projectiles, sand anchor, traveling block, and wooden crotch), and proceeded to the wreck. When they left the station at 3 pm Keeper Howard reported a “fresh gale from WSW” and a treacherous beach. Howard rode ahead on horseback and encountered Keeper Terrell who had walked about three miles from the wreck in order to meet him.

Meanwhile, the Hatteras Inlet Life-Savers were having a “laborious” time traversing the fourteen miles from the station to the wreck. In gale force winds with the sea washing up on the beach, one of the two mules eventually refused to continue. The crew persevered, pulling and pushing the heavy steel-wheeled beach cart with the aid of one exhausted mule. They did not arrive at the wreck until eight pm. Keeper Howard reported that “the night was so dark and the surf very high, breaking all over the schooner” that “in my judgement it was best to wait for daylight” to attempt the rescue. Howard proceeded to make “a large fire on the beach abreast of the vessel to encourage those on board.”  In a side note in his report, Howard asks to be excused for his “bad writing” because his “eyes are almost blind on account of the smoke from the fire on the beach.”

The sailors on the schooner had lashed themselves to the bowsprit, wrapped in the triangular jib sail, as protection against the frigid waves and howling wind.

At six o’clock the next morning Keeper Howard ordered the rescue operation to begin. The first line fired to the schooner from the bronze Lyle gun dropped across the jib boom, but it blew off before one of the sailors could grab it. The second shot was successful. A sailor used the line to haul aboard the tail block (with whip line) and secure it to one of the masts. Next, the hawser was sent out to the ship by the whip line. The sailor was able to secure the hawser above the tail block. The surfmen on shore were then able to rig and deploy the traveling block and breeches buoy (life ring with canvas pants attached).

By late morning all sailors on board the vessel had been brought to shore with the exception of the steward who had fallen from the quarter deck the day before and had died during the night. His body was left lashed to the bowsprit.

Keeper Terrell had remained with the crew from Hatteras Inlet throughout the rescue operation before returning to Portsmouth Island. There is no record of where the cold and exhausted sailors were taken, but when rescues were performed far from the Life-Saving Station it was typical for island volunteers to shelter sailors for several days. Keeper Howard and his Life-Savers left the scene of the wreck at 12:30 pm and arrived back at their station at 5 pm. Howard remarked in his report that the journey was “very hard” due to walking fourteen miles pulling the beach cart through a “blizzard” of a snowstorm.

Back at the station, the life-savers’ feet were so badly swollen that the men “could not get on their boots” and beach patrols were suspended that night. In his report, Keeper Howard complained that his team “could not stand the long hardships,” and requested “good horses” which would have facilitated a quicker response.

At 7:20 the next morning Keeper Howard and several of his life-savers left the station with mules pulling a surf boat, and headed back to the wreck to retrieve the body of the sailor who had died. When they arrived at the schooner, they discovered that the “citizens of the island had got him ashore and took him up to the settlement and gave him a decent burial.”

Keeper Howard stopped at his home in the village, and his wife, Zilphia, prepared dinner for him. He fed the mules and left for the station at 1 pm, arriving back at Hatteras Inlet at 5 pm. In his January 5, 1895 report, Keeper Howard remarked that he never saw Capt. Hawes after bringing him ashore, and, contrary to custom, “did not get any letter of thanks.”

An official inquiry, prompted by the death of the steward, reported that “the diligence and devotion of both the keepers and the men under their command throughout the entire occurrence are well attested. It was the first instance of a wreck in the vicinity since the appointment of Keeper Terrell, and his promptness and fertility of resources go far to prove the fitness of his selection. Keeper Howard has rendered long and satisfactory service, which is not sullied by his record in this disaster.”

Copy of handwritten remarks included with the Wreck Report (transcription below photos): 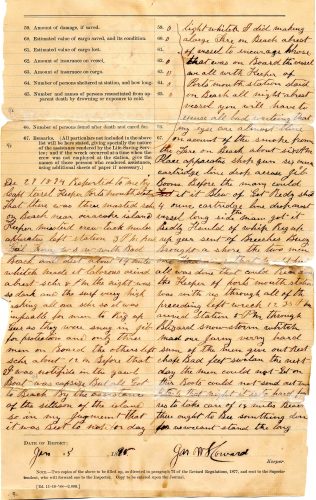 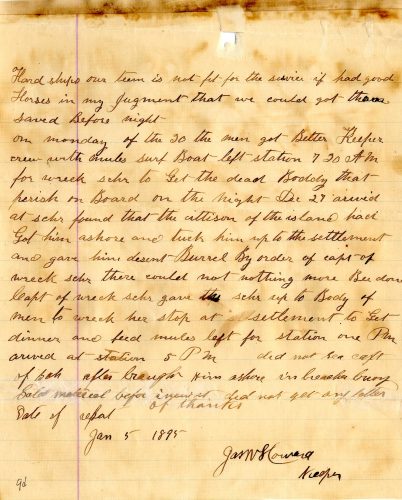 Transcript of remarks included with the Wreck Report (original spelling and grammar retained):

On Monday of the 30 the men got Better Keeper crew with mules surf Boat left station 7 20 AM for wreck schr to Get the dead Boddy that perish on Board on the night Dec 27 arived at schr found that the cittison of the island had Got him ashore and tuck him up to the settlement and gave him desent Burrel By order of capt of Wreck schr there could not nothing more Bee don leapt of wreck schr gave the schr up to Body of men  to wreck her stop at settlement to Get dinner and feed mules left for station one PM arrived at station 5 PM did not sea capt of Sch after braugh him ashore in breaches buoy Sold material befor [??] did not get any letter of thanks