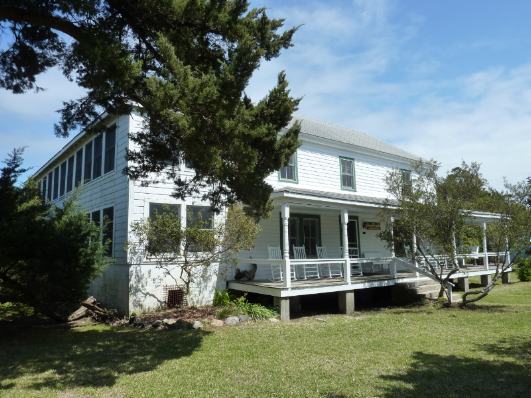 During his sailing career Elisha Chase occasionally anchored his vessel at Ocracoke. There he met Thurza Howard (1803-1849), daughter of William and Agnes Mason Howard. She was the great-granddaughter of William Howard, Sr., colonial owner of Ocracoke Island. On February 14, 1821 Elisha and Thurza were married.

In 1828 Elisha Chase purchased, from the heirs of Thomas Wahab, an Ocracoke parcel of “3 acres more or less” with a commanding view of Pamlico Sound. Shortly thereafter he and Thurza had a large 2-story, double-pile (two rooms deep), gable-roofed frame house built on their property. Nearby they added a horse stable and outbuildings. Soon after his marriage to Thurza Howard, Elisha Chase entered into a business partnership with his father-in-law. They operated a retail store known as Howard and Chase, purveyors of dry goods and other merchandise.

Elisha and Thurza had four children: Eliza Ann Chase (she died in 1824, when she was less than two years old, and is buried on Ocracoke Island), William Howard Chase, George Howard Chase, and Thurza Chase.

In 1834 Elisha and Thurza Chase sold their property to Thurza’s brothers, William Hatton Howard and George Washington Howard. With their three remaining children, Elisha and Thurza left Ocracoke to join a wagon train heading west. Somewhere in Tennessee both Elisha and Thurza fell ill, and lay unconscious or in delirium for several days. When Elisha awoke he learned that his wife had died. Distraught, he claimed to have medicine in his satchel that would have cured her. Thurza was buried alongside the trail.

In March of 1835, seaman Tilmon Farrow of Ocracoke wrote a three page letter to Boston attorney William Davies Sohier in regards to suspicious dealings in dry goods “sold uncommon cheep” at Howard & Chase’s store. There was also a question about “uncurrent” (outdated or illegitimate) bank bills passed by a Capt. Weeks, and the “robbing” of a vessel. Elisha Chase was sought for information about these affairs, but as he “left this state some time last spring…and not yet been heard of as we can find out” he was unavailable. He left behind “two letters” and “a considerable amount of money.” He seems not to have been a fugitive, however, since his destination, Boonville, Missouri (Cooper County), was known to Farrow.

Eventually Elisha and his three children settled in Callaway County, Missouri, not far from Boonville. He soon became a merchant in the town of Portland, Auxvasse Township. Elisha married again, this time to Anne (surname unknown), and they had one child, Henry L. Chase. After Elisha died in 1844 his estate was divided equally between his son William Howard Chase, his daughter Thurza and her husband John R. Seal, Elisha’s widow and her new husband Lewis Bolton, a trust for his minor son George Howard Chase, and a trust for his minor son Henry L. Chase.

In 1867 George Howard purchased the former Ocracoke Island property of Elisha and Thurza Howard Chase from the court. A year later he sold it to Captain Samuel Dudley Bragg (1836-1902). Capt. Bragg and his wife, Mariah Styron Bragg (1847-1917), lived there with their seven children.

Fearing that he would be lost at sea, Capt. Bragg immediately sold the house and land to “his wife and all his children and children to come.”

In 1892 Samuel Dudley Bragg, Jr. (1870-1892) and his brother Maltby (1877-1892) were on the mainland, having sold a catch of fish. As they were preparing to sail back to Ocracoke the weather deteriorated. They were advised not to attempt to cross the sound in such weather, but the brothers insisted, saying they knew the waters and they would be alright. They cast off and were never heard from again.

In 1902 a schooner captain brought his vessel to an Ocracoke anchorage because his ship was leaking. Not being able to make the repair, he left his vessel at Ocracoke under the care of Capt. Samuel Dudley Bragg, Sr. After Bragg finished the caulking a tug arrived to tow the schooner to Norfolk. Capt. Bragg and his son, James, accompanied the schooner. After rounding Cape Hatteras they encountered high winds and rough seas. The captain and crew of the tug, fearing that the heavy seas and strong wind would pull the bowsprit out of the schooner, decided to “cut her loose.” The schooner disappeared in the storm and sank.

Mariah Bragg is buried near her home. Her marker reads “She hath done what she could.”

Eventually Capt. and Mrs. Bragg’s son, Gary (1881-1954), became sole owner of the house and land. He remodeled the house with a hip roof, made several other changes, and named his property the Cedar Grove Inn. As Ocracoke’s first innkeeper he catered primarily to hunters and anglers. Later he built several small cottages which were rented to Navy personnel during World War II.

In 1951 Gary Bragg sold his property to Warwick and Margueritte Boos who moved to the island from Illinois. They operated the business as the Soundfront Inn until the early1970s.  Today the house is a popular rental property owned by retired Ocracoke school teacher, David Senseney.

For more information about this rental house click here. As David says, “You are invited to return to a simpler time. The Soundfront Inn retains much of its original charm. Antiques and local decor combined with tasteful remodeling add to the ambiance of your stay. Take a vacation to ‘yesteryear.'”