Although medical care was spotty on Ocracoke in the late 19th & early 20th centuries, professional dental care was non-existent. Toothbrushes as we know them were unheard of. My father often remarked that he never knew his father to brush his teeth, but that he had only lost one tooth to cavities by the time he died at nearly 70 years old.

In the late 1800’s and early 1900’s an itinerant salesman occasionally traveled to Ocracoke selling blackgum twigs. They were of small diameter, about 5″ – 7″ long. The salesman, a plump gentleman with a pleasant smile, carried them in bundles, tied up with twine. 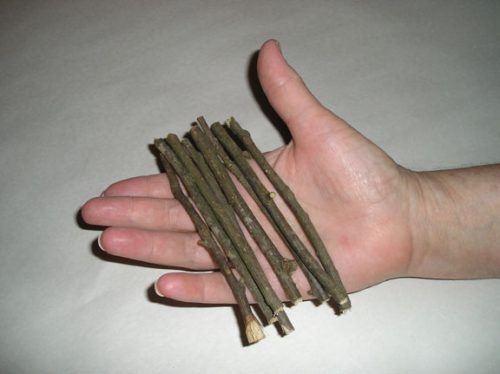 Blackgum trees (sometimes called tupelo, black tupelo, pepperidge, or sourgum) are highly adaptable and grow in many places along the east coast from Canada to southern Florida and as far west as Texas.

Hollow sections of the blackgum tree were used by early beekeepers as hives, and honey produced from blackgum flowers has an exceptionally superior taste. Ocracokers, however, prized the tree for its twigs. The twigs contain soft fibers. When the ends are chewed or pounded with a hammer they make a natural toothbrush.

Blackgum does not grow on Ocracoke Island. In its absence, islanders turned to plum twigs. Blackgum, however, made a superior toothbrush, and Ocracokers were happy to see the “toothbrush man” step off of the boat and wander up and down the sandy lanes selling his wares.

The toothbrush man always wore a dark suit and a necktie. He was large, but not very tall, and he walked from house to house. He stayed overnight at the old Pamlico Inn, or later on, at Dessie Fulcher’s boarding house. Blackgum twigs were two for a nickel, and one toothbrush would last two or three weeks.

Dipped in baking soda or salt, the blackgum toothbrush served as the island’s primary method of dental care until “store-bought” toothbrushes and toothpaste were available from local merchants sometime in the early part of the twentieth century. In spite of this innovation a number of older residents continued to use twig toothbrushes for decades.

In addition to dental hygiene, twig brushes were commonly used for dipping snuff. In fact, until just a few years ago several elderly island women routinely kept a blackgum or plum twig handy, chewed soft on one end. They are perfect for picking up just the right amount of snuff to pack between your cheek and gum. If the snuff was too strong some folks would fry bread flour and mix it with the snuff to make a milder substance.

The toothbrush man is long gone and old women seldom sit on their front porches after dinner and dip snuff. But their stories live on, tales of a bygone era when life was simple though sometimes difficult; a time when a small twig served as a toothbrush and a dip of snuff could help ease away the day’s troubles.