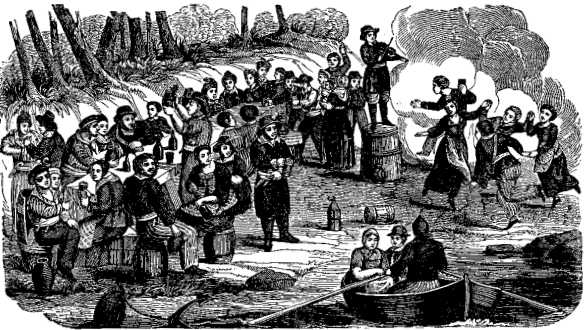 Those two words conjure up widely divergent images: a quaint and wholesome Outer Banks village…and wild sexual and dipsomaniacal license. I couldn’t imagine a title or topic that would capture more reader attention.

Although the identity of Captain Johnson remains a mystery, most scholars agree he must have been a seaman of considerable knowledge and experience, perhaps even a privateer who frequently crossed paths with his subjects.

So what exactly transpired in the fall of 1718 on Ocracoke Island?

Less than a week after Blackbeard’s blockade of Charleston Harbor on June 4, 1718, the pirate captain wrecked the Queen Anne’s Revenge at Old Topsail Inlet. In a brilliant maneuver, Teach marooned the majority of his rag-tag crew, and took command of his smaller sloop, the Adventure. Accompanied by his closest associates, Teach absconded with their recent plunder. Blackbeard then surrendered to North Carolina Governor, Charles Eden, and received the king’s pardon.

In spite of the pardon, Teach was not done with piracy. In late August, in the Atlantic Ocean east of Bermuda, Blackbeard captured a French merchant ship laden with sugar, cocoa, cotton, and indigo dye. Rather than return to the Caribbean with his prize, Teach sailed north, bound for North Carolina where he knew he would receive a warm welcome from Governor Eden and his Secretary, Tobias Knight.

In early September the Adventure, passed through Ocracoke Inlet. The pirate crew remained at Ocracoke for several weeks, careening and repairing their ship. Meanwhile, Captain Teach paid a midnight visit to his friend, Tobias Knight, in Bath. A plan was hatched.

On September 24 a Vice-Admiralty Court heard the case of the French “sugar ship” which Blackbeard had unloaded and burned to the waterline.  Blackbeard claimed he had encountered the vessel abandoned on the high seas, and had burned her when it was discovered that she was leaking. Teach was cleared of any crimes, and allowed to keep the cargo. Of course, he was ordered to pay tariffs to the colonial government. In addition, Knight received twenty casks of sugar as a gift.

It was time to celebrate, and Ocracoke Island was the place to party. Mark R. Jones, in his 2005 book, Wicked Charleston: The Dark Side of the Holy City says this about what happened next: 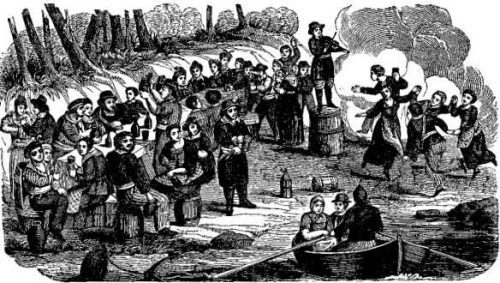 As Robert E. Lee writes about the “pirate festival” in his 1974 book, Blackbeard the Pirate, A Reappraisal of His Life and Times, Teach was back at Ocracoke after his appearance at the Vice-Admiralty Court, and the notorious pirate captain, Charles Vane, was soon to join him.

In July Captain Vane had spurned the king’s pardon which had been offered by the Governor of the Bahamas. After attacking the Governor’s fleet, eluding capture, and plundering a number of vessels on the high seas, Vane sailed north to Ocracoke.

Lee writes that “Vane’s visit with Blackbeard…actually constituted the largest pirate festival ever held on the mainland of North America. Among the celebrities who attended the festivities near what is now the village of Ocracoke were Edward Teach, Israel Hands, Charles Vane, Robert Deal, and John Rackham, all of whom at some time during their lives had commanded a pirate ship.”

Lee calls Ocracoke a “pirate playground” where “hogs and cows were barbecued, and many of the fishermen and traders passing the inlet, upon seeing such a throng of people, stopped to trade with them and furnish them with fresh provisions.” Those provisions, Lee assures us, included “an ample supply of rum, and the punch bowls were never empty.”

Other writers describe the gathering as

Interestingly, the earliest mention of this pirate gathering, from the pen of Captain Charles Johnson (remember him from his 1724 book, A General History of the Robberies and Murders of the most notorious Pyrates?) says only that, “Captain Vane went into an inlet to the northward, where he met with Captain Thatch, or Teach, otherwise called Blackbeard,…and civilities passed for some days, when about the beginning of October, Vane took leave and sailed further to the northward.”

That’s it! Captain Vane and Captain Teach passed “civilities for some days.”

No doubt a meeting of Blackbeard and Vane took place on Ocracoke Island, where Blackbeard was encamped in the fall of 1718.  Rum surely was involved; perhaps even barbecued hogs and cows.  If a few musicians were among the pirate crews…maybe a mouth harp, or a harmonica, even a concertina or a flute…there would have been rowdy sea shanties. Did merchant vessels stop for a bit of revelry? Who knows? More likely they kept their distance from a group of seasoned pirates.

What about “women picked up from the waterfront,” and scenes of “whoring with more than fifty wenches?”  Was it a “week of drunken debauchery and womanizing,” “a huge, continual party” with a “throng of people” coming and going, a time when “wild and wicked sea villains chased women around the beach, while musicians played all night?”

Kevin Duffus, author of The Last Days of Black Beard the Pirate, doesn’t think so. And I agree.

Duffus refers to the pirate gathering as a “banyon,” a traditional British Royal Navy term for a period of rest and relaxation. He envisions makeshift tents fashioned from sailcloth that were erected on the beach, and concurs that 18th century sailors would have eagerly hunted and roasted wild game, and gathered fresh oysters and other shellfish rather than eat the ship’s stores of worm-infested beef and moldy hard tack.

He points out that the woodcut pictured above debuted in an 1837 volume titled The Pirate’s Own Book, and seems to be the source of the exaggerated legends of “a weeklong bout of raucous festivities.” As Duffus points out, “The artist could hardly have imagined a more inaccurate scene.”

While Charles Vane may have brought one or two women to the gathering, there surely were not as many as depicted in the woodcut. After all, there was no village on the island at that time. Nor would the participants have been so nattily dressed, nor so prim and proper (consider the dignified fiddler). To emphasize his point, Duffus remarks on the sturdy wooden dining table (where did that come from?), and notes that one woman is even carrying a baby!

It does make for a colorful story, however.