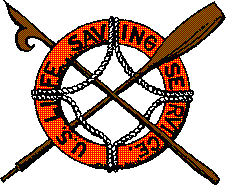 The United States Life Saving Service was established in 1871 to come to the aid of stricken and shipwrecked sailing vessels and mariners. The Service continued until 1915 when it was merged with the Revenue Cutter Service to become the United States Coast Guard. During the USLSS’s 44-year history, a network of more than 270 stations were established on the shores of the Atlantic Ocean, the Pacific Ocean, the Gulf Coast, and the Great Lakes.

By the end of its tenure, the men of the United States Life Saving Service had come to the aid of more than 28,000 vessels in distress and saved the lives of more than 178,000 sailors and passengers.

The first station on Ocracoke Island was the Cedar Hammock (or Hatteras Inlet) Station, commissioned in 1883. The Cape Lookout Station, where one of the most remarkable and heroic rescues in the annals of the USLSS occurred in 1905, was established in 1888.

In February of 1905 an influenza epidemic ravaged eastern North Carolina. Nearly all of the Cape Lookout station’s nine-man crew were either ill with the flu or recovering but still weak and incapacitated. In spite of the illness, Keeper William H. Gaskill insisted that normal watches be kept in the station’s cupola.

At noon on February 10, 1905, Keeper Gaskill mounted the ladder to the cupola to relieve the surfman who had been on duty for two hours. Keeper Gaskill’s initial view of the ocean was obscured by dense fog, but soon a rift in the fog allowed Gaskill a clear image of the topmost spars of a sailing vessel. His experienced eye convinced him that the vessel was aground on Cape Lookout shoals.

Keeper Gaskill immediately descended the ladder and alerted his ill and fatigued crew. He then ordered them to prepare to launch the rescue surfboat.

Once at the edge of the ocean, the surfmen pushed their heavy boat through the surf as waves broke over the bow. Eight lifesavers then clamored into the boat and began pulling at the oars, with Keeper Gaskill at the tiller.

They knew it would be nine arduous miles from the station to the Cape. Finally, late in the afternoon, they arrived to see the Sarah D. J. Rawson, a 386-ton, three-masted schooner which had been carrying a full load of lumber from Georgetown, SC to New York, awash on the shoals. The vessel had wrecked the day before, on Thursday, February 9 at 5:30 pm.

In the twenty-fours since she had wrecked, powerful waves swept over the vessel, carrying away her cargo of lumber, her deck house, and one unfortunate sailor who disappeared in the raging surf. In the ensuing hours the Rawson continued to break apart as her masts split and the deck was reduced to splinters. The six remaining mariners clung desperately to the remains of the stricken schooner as it deteriorated.

When the lifesavers arrived at the wreck late in the afternoon, they discovered the Rawson lying in “a seething mass of breakers” surrounded by floating lumber, broken masts, rigging, sails, sections of the deck and hull, and other debris. Keeper Gaskill reported that his surfboat was in danger of pitching end over end in the choppy water.

The lifesavers attempted to reach the exhausted mariners, but were continually repulsed by the floating wreckage which threatened to punch holes in the side of their small craft. Finally, as night began to fall, Keeper Gaskill realized there was nothing more they could do, and ordered his surfboat to back away from the wreck. The lifesavers spent the night nearby in their open boat with nothing more than water for nourishment, and only their oilskins for protection from the frigid night air.

At daybreak the lifesavers returned to the wreck, only to discover the situation virtually identical to the day before. However, Keeper Gaskill, an eastern North Carolina native familiar with the ocean currents, expected the approaching change of tide to help moderate conditions. By late morning the waters laid down sufficiently for the lifesavers to maneuver their surfboat close enough to the Rawson so they could throw a heaving stick (a wooden stick about 12″ long attached to a lightweight hemp line, and with a monkey’s fist knot on the other end).

On catching the heaving stick, one of the Rawson’s mariners tied the line around his waist and jumped into the water; the surfmen pulled him to the safety of their boat. Five more times this procedure was repeated. Eventually all six soaked sailors were brought aboard the surfboat. Without regard to their own discomfort, the lifesavers removed their oilskins and wrapped them around the sailors’ shivering bodies. Now with about one thousand extra pounds of weight, the lifesavers began the long journey back to their station.

Finally, in late afternoon, Keeper Gaskill and his crew brought the Rawson’s six sailors safely to shore. The lifesavers, exhausted and still feeling the effects of the flu, had rowed eighteen miles and had spent twenty-eight hours, in February, in an open boat to save the lives of six people they had never met.

As recognition of their bravery and dedication to duty, Keeper William Gaskill and his surfmen, Kilby Guthrie, Walter M. Yeomans, Tyre Moore, John A. Guthrie, James W. Fulcher, John E. Kirkman, Calupt T. Jarvis, and Joseph L. Lewis, were awarded the Gold Life-Saving medals “for heroic daring” in the rescue of the crew of the Sarah D.J. Rawson.

This story is remarkable, but only one of more than 28,000 rescues performed by the men of the United States Life Saving Service.