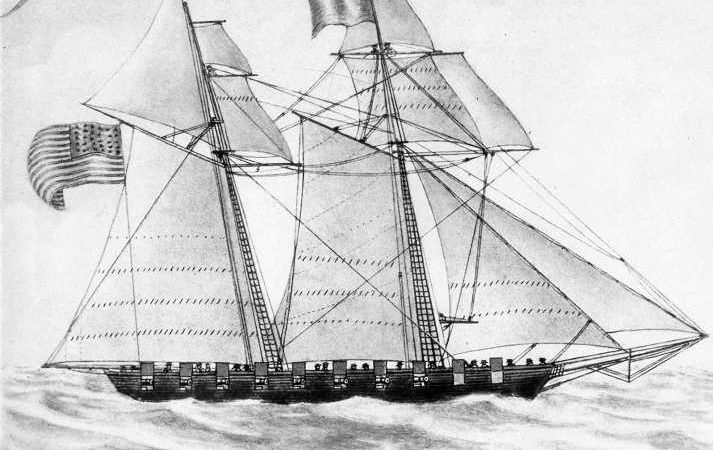 The U.S. Coast Guard has recently expressed an interest in having the NC Department of Cultural Resources place a highway marker on Ocracoke in honor of the Revenue Cutter Mercury which was engaged in and around Ocracoke two hundred years ago, during the War of 1812.

Many residents of Ocracoke and visitors to the island are unaware of the significant role Ocracoke played in resisting an invasion of the North Carolina mainland by British forces in that war.

The United States Coast Guard has published a well researched, 16 page booklet, “War of 1812, Revenue Cutter Operations and the Core Coast Guard Missions” written by William H. Thiesen. (The booklet is available on line at http://www.uscg.mil/history/1812/doc/WAROF1812DOC.pdf.)

In his first paragraph Thiesen notes that “During the War of 1812, the revenue cutters protected American commerce and enforced trade legislation, but they also performed defense and combat missions that were essential to the war effort….”

The Revenue Cutter Pickering, similar to the Mercury: 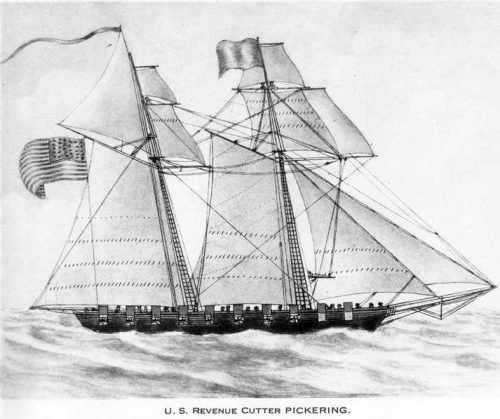 On November 27, 1812 the British Navy instituted a blockade “around all major ports along the nation’s East Coast.”

Theisen goes on to relate that on “March 30, 1813, [the British had] extended the blockade…. By summer, the blockade closed in around Southern ports and, on September 15, 1813, a British officer landed at Ocracoke, North Carolina, under a white flag and delivered to the deputy customs collector a notice declaring Ocracoke ‘and all others of note to the southward of this, in a state of blockade.’”

Theisen describes the situation at Ocracoke:

“During the British invasion of the North Carolina coast, the revenue cutter Mercury proved the value of small maneu­verable vessels in these shallow sounds and inland water­ways. Homeported in the city of New Bern, North Carolina, Mercury was perfect for operating in North Carolina’s shal­low coastal waters. The cutter’s master, David Wallace, came from a prominent family from the state’s Outer Banks and he had an intimate knowledge of the coast.… Ocracoke proved easy prey for British attackers. On May 21, the brazen British privateer Venus of Bermuda, attempted a surprise attack on cutter Mercury and American vessels anchored at Ocracoke. The local inhabitants detected the plot and raised an alarm before the British privateer could spring its trap. The enemy raider managed to escape and searched for easier prey sailing offshore.

“In mid-summer a more ominous threat loomed on the horizon, as a Royal Navy squadron appeared off Ocracoke. On July 12, 1813, the cutter Mercury saved the day after the squadron launched a surprise attack. Fifteen armed barges, supporting approximately 1,000 British officers and enlisted men, captured two American privateer brigs, but Mercury managed to escape with the local customs house papers and bonds by ‘crowding upon her every inch of canvas she had, and by cutting away her long boat.’ The British had hoped to take the cutter, so their barge flotilla could enter Pamlico Sound and capture the city of New Bern. Mercury thwarted those plans by outrunning the barges, sailing quickly to New Bern and warning city officials of probable attack by British troops. Mercury’s early warning allowed locals the time to muster the necessary army and militia forces to defend the city and the British reversed their invasion plans.”

Another account of the War of 1812 and the prominent part played by Ocracoke was published in The Story of Ocracoke Island. The article, “1812-1813, The British Invasion of North Carolina,” compiled by Calvin J. O’Neal, Alice K. Rondthaler, & Anita Fletcher, Copyright 1976, is reproduced below with  permission from the Hyde County Historical Society:

“In the War of 1812 the British forces made a landing on the Carolina shores with the intention of blockading Ocracoke Inlet, as it had been successful in doing elsewhere. These forces conducted landing raids which caused alarm and panic among the inhabitants of the coastal regions. In the spring and early summer of 1813 the people of eastern North Carolina feared that they also were threatened, and it was not long before they were actually subjected to attack.

“The chief incursion occurred in July, 1813, and is described in an account in the Philadelphia Aurora, August 10, 1813, reprinted from the Baltimore Patriot, which quoted liberally from a letter from Thomas S. Singleton, legislator, lawyer, and customs collector of New Bern and Ocracoke, as follows: ‘On the 11th of July a fleet under the command of Cockburn, consisting of one-74, three frigates, one brig, and three schooners was discovered at nine o’clock at night off Ocracoke bar. The revenue cutter got underway with the money and customhouse bonds belonging to the office at daylight. The barges started from the fleet at the time the cutter weighed anchor. The first eleven came in regular order until nearly within reach of the shot of the privateer brig Anaconda, and Letter of Marque, Atlas. Then they separated and hauled off under the edge of Ocracoke, waiting the arrival of the other ten, and on their arrival, slowly approached the vessels, firing their 12-lb carronades…but without effect. The Anaconda and Atlas began firing, but it was of short duration for they had but 11 men and the other had 30; and the enemy had less than 3,000 inside the bar and crossing. The crews of the vessels took to their boats and mostly escaped. The captain of the Atlas kept on board and continued firing at the enemy after all his men had left him.’

“A North Carolina privateer who used Beaufort and Occacock Inlets during the War of 1812 and British Invasion of 1813 was Capt. Otway Burns. Burns was a native of Onslow County from near Swansboro. Before the War of 1812 he had been given command of a merchantman sailing between New Bern and Portland, Maine. During the War he operated the Snap-Dragon. The Snap-Dragon carried four 12-lb. guns and a pivot fun, and at Ocracoke and Beaufort Inlets Burns took a big toll of British shipping during the War. Without pilotage he one time made it across the bar at Ocracoke Inlet and up to shell Castle anchorage where his ship was lightered and from thence up the Neuse River to New Bern. He married a Portsmouth girl and they move to Portsmouth in 1842, where he lived until his death about 1850. From 1821 to 1834 Otway Burns served in the North Carolina Assembly, and was instrumental in the forming of Yancey County in the western part of the state. Its county seat, Burnsville, is named after Captain Otway Burns.”

Also, in May, 2006 we published an Ocracoke Newsletter recounting Ocracoke’s role in the War of 1812. That Newsletter includes an annotated article describing the invasion which appeared in the “Raleigh Register, Extra” of July 17, 1813, entitled “The Enemy in North-Carolina.” You can read that article here:  http://www.villagecraftsmen.com/news051706.htm.