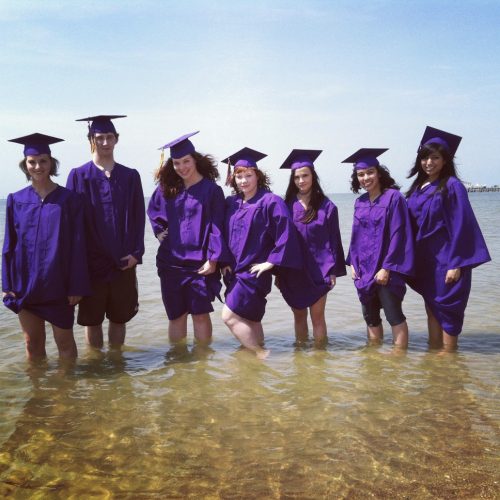 Following is Molly’s Valedictory Address at graduation ceremonies for the 2012 class of Ocracoke School:

I have written this speech no less than 16 different times. Sometimes they were terrible, other times they were just ok, but as I read through them I realized they all had one common factor that made me hate them. They were all really cheesy. I didn’t want my time here to be melted down into a sickly sweet blob of clichés and inside jokes. This school and community have encouraged me to push boundaries time and time again over the past four years and we are all up here because of the countless hours that you’ve invested in us. And that is really something to celebrate and reflect on as the class of 2012 moves on from Ocracoke School.

When I joined this class, I was a ninth grader. I had been home-schooled up until that point and, let’s be honest; I was probably the nerdiest person I knew. But my classmates loved me then and they love me now, no matter how many Harry Potter and Glee references I still drag into conversation. What I’m getting at is that we should never forget that we come from a very special place, one where our differences and quirks are accepted and included instead of ridiculed. People have always said that our class is filled with big personalities, and it’s true. Every one of us is so vastly different from the other six, and I think that’s mostly due to the fact that this school and this island embrace and celebrate differences.

I couldn’t be more thankful to have grown up on Ocracoke because from music lessons, to Teennight, to radio shows, this community has allowed me to experiment with different interests and encouraged me to think outside the box. The things I have learned from the men and women both in the classroom and the community who have become teachers and mentors will stay with me forever and I’m willing to bet that if you’re here now it means you’ve been one of those people for me or my classmates. As we all move on to new places and adventures, it’s wonderful to know that the people of Ocracoke will always have our back.

Graduation is a time when we can reflect on the experiences and people that brought us where we are today and there is no one more deserving of my thanks than my parents. From a very young age, you’ve instilled in me a kind of wanderlust, the German word meaning the overwhelming desire to travel. It’s what led me on a spring break trip with Emma to Denmark in 2010, then to an exchange year in Austria a few months later, and now finally to Emerson and Boston. You’ve taught me how to think for myself and be independent but also inspired me to be globally conscious and dependable. Thank you for encouraging me in all, well, most of my crazy ideas. I feel so lucky to be your daughter.

As many of you already know, I have had some experience with living in a different place, and without getting too preachy, I would like to offer my classmates one word of advice. A motto of the United Kingdom Special Air Force is “those who risk, win.” As we start this next chapter of our lives, don’t allow yourselves to get caught up in monotony and mediocrity. I hope you try new things, and go new places, and do what you love doing, and along the way, I hope you take some risks.

Winston Churchill once said, “This is not the end. It is not even the beginning of the end. But it is, perhaps, the end of the beginning.” Today marks the end of our beginning, and I can’t wait to see where the rest takes us.