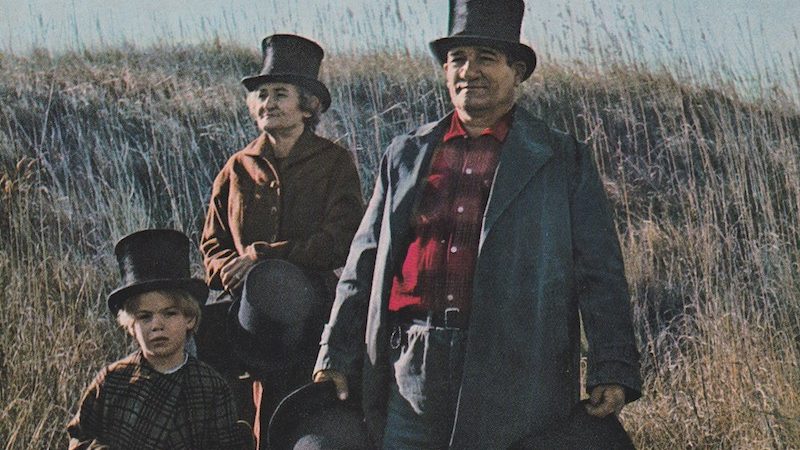 My father occasionally told me the story of the mid-nineteenth century Outer Banks “stovepipe hat” shipwreck. It allegedly happened at Rodanthe before my father’s time, so he did not know of it first-hand. But he had heard of the wreck from residents of Hatteras Island. The ship was carrying thousands of elegant beaver stovepipe hats, exactly the same headgear made popular by President Abraham Lincoln. When the ship broke apart, the hats washed up on the beach. In short order everyone on Hatteras Island was wearing stovepipe hats.

In recent years I became curious about the wreck. What was the name of the ship, I wondered. And in what year did it come ashore? Then I discovered a 1965 magazine advertisement put out by the North Carolina Tourism Bureau. It included a captivating image of a proud Outer Banks family, each one wearing a beaver hat and holding several more in their hands. It is titled “North Carolina’s Incredible Shipwreck.” 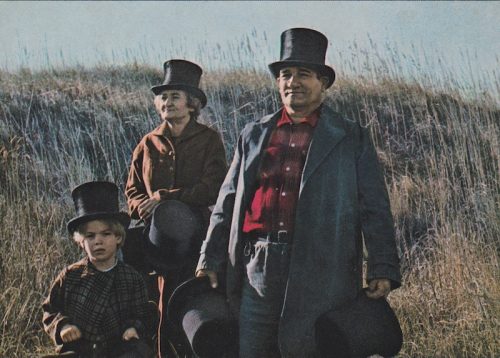 The text under the photo reads “After a heavy storm on North Carolina’s Outer Banks, the native folk still search the shoreline near the rotting timbers of countless old shipwrecks for trinkets—and treasure.

“Beneath the famed gamefish waters of the ‘Graveyard of the Atlantic’ rest more than 2,000 hapless vessels. Each of them has its own story.

“The most incredible tale of all, however, is told about the steamer Flambeau whose cargo of 10,000 stovepipe hats all washed ashore at once back in 1867, causing a ruckus that hasn’t been forgotten yet.

“Following the wreck of the Flambeau, there were more than 125 tall stovepipe hats for every man, woman and child on these banks. Easter that year was an elegant occasion.

“Those fine beaver toppers were on their way to becoming a prevailing fashion when the owners lodged complaint, and the Army came and seized the stylish headwear.

“Stovepipe hats are hard to find on the Outer Banks of North Carolina today. But the stories are as oft-told as ever, for these banks, where the first attempt was made to settle American, are the cradle of our history. And the ghosts of early colonists and pirates rustle easily here.”

I immediately did some research on the steamer Flambeau. David Stick’s 1952 book, Graveyard of the Atlantic, makes only one mention of the Flambeau, in a list of vessels totally lost, on page 248. The Flambeau is identified as a steamer that wrecked in March, 1867 at New Inlet. On a map of the coast of North Carolina, Stick shows New Inlet (since closed) just north of Rodanthe, on Hatteras Island. There is no mention of top hats in Graveyard of the Atlantic, nor in Stick’s 1958 book, The Outer Banks of North Carolina.

Ben Dixon McNeil, on the other hand, in his 1958 book, The Hatterasman, devotes two entertaining pages to the stovepipe hat wreck. Fred M. Mallison, author of The Civil War on the Outer Banks, tells the same story, which he learned from McNeil. According to McNeil, 10,000 silk hats were on board the Flambeau, en route to markets on the west coast of South America. When the vessel broke up “the beach was littered with hats, and it was not long before every man, woman, and child on this Island had one of his own.” He goes on to declare that “the beaver hat, and the taller the better, was very general Easter wear that spring.”

McNeil quotes Captain John Allen Midgett who remembered Captain Bannister Midgett saying that “even the porpoises were wearing stove-pipe hats that spring.” According to the story, the rightful owners of the hats prevailed upon military authorities to send troops to Hatteras to seize the hats and deliver them to the Military Governor of North Carolina.

As for the ship itself, McNeil states that even today, “the upper part of her boiler…[is plainly marked, and] sits about fifty yards offshore.”

Eventually I discovered several contemporary newspaper accounts of the wreck of the Flambeau. They tell a different story.

According to a letter from Major A. Compton, of the United States Army, who was on board the Flambeau at the time of the disaster, and published in the New York Times, dated March 10, 1867, titled “The Loss of the Steamship Flambeau,” “[t]he ship left Alexandria on the evening of the 26th of February, with five companies of the Fortieth United States Infantry on board, numbering nine officers and four hundred and sixty-two men, and two ladies, destined for Fort Fisher, Fort Caswell and Smithville, N.C…. On the morning of [March 1] we entered New Inlet, N.C…. [Shortly after 3 pm] the ship struck [the bar], and was hard and fast….

“During the night of the 1st inst. the surf, which roiled heavily, forced the ship about two lengths further toward the shore, leaving her in about six or seven feet of water.

“On the morning of the 2nd it was deemed advisable to make an effort to remove the troops from the vessel to the shore, and through the assistance and by the combined efforts ably, willingly and cheerfully rendered by Capt. Everson, his officers and crew, about 400 men were safely landed in the ship’s boats.

“Before daylight on the morning of the 3d, the wind had changed to northeast, and the surf rolled entirely over the ship. At times the spray flew over the foretopsail-yard. Her boilers shifted during the night, and she made water to the depth of six or seven feet in the lower hold. The wind had increased to a gale, and through a tremendous sea the remainder of the troops were safely landed.” (http://query.nytimes.com/gst/abstract.html?res=9907E2DD1731EF34BC4852DFB566838C679FDE).

There is no mention of top hats in Major Compton’s account. Furthermore, the inlet just south of Fort Fisher, called New Inlet, was in New Hanorver County. The New Inlet where the Flambeau wrecked was definitely not the Dare County inlet of the same name.

Numerous attempts to verify the Outer Banks top hat story from Hatteras Island residents yielded only comments such as “I grew up hearing the story, although my mother’s memory is very selective now & she doesn’t remember lots of the stories she told me,” or “Regarding the Stovepipe hat wreck, … I was hoping to gather more information. .. [but] I have had no success” or “Had no luck and no one seemed to really have definite info on those hats. Hope that something will surface.”

Attempts to verify the story by professional researchers were equally unproductive. Bland Simpson, (UNC, Department of English & Comparative Literature, Chapel Hill), Jessica A. Bandel (Historical Research Office, N.C. Office of Archives and History), and Michael Hill (Supervisor, Historical Research, NC Office of Archives and History) could only uncover secondary sources (viz. McNeil and Mallison). After extensive searching they were unable to track down a single contemporary primary source for the story.

Interestingly, as mentioned above, McNeil states that “the upper part of [the “stovepipe wreck’s]  boiler…[is plainly marked, and] sits about fifty yards offshore [of Hatteras Island].”

According to the Outer Banks Free Press (http://www.outerbanksfreepress.com/atlanticgraveyard.html), this boiler belongs to a different vessel, the Oriental:

“The Oriental…was a Federal Transport ship. The boat sank on May 16, 1862. The ship was 210 feet long. It is also known as the Stovepipe Hat Wreck. The ship lies about 200 yards off the beach at Pea Island National Wildlife Headquarters, three miles south of the Oregon Inlet on Rt. 12…. [T]he boiler stack [is] sticking out of the water.”

The Oriental (the “Stovepipe Hat Wreck”): 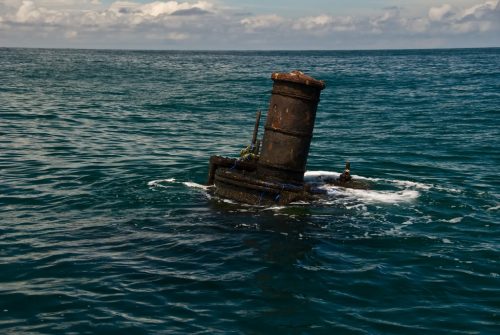 After considerable research I have become convinced that the elaborate and fanciful story of the top hats was invented by Ben Dixon MacNeil in a co-mingling of the story of the wreck of the Oriental (wrecked 1862 on Bodie Island, near New Inlet in Dare County) whose boiler looks like a stovepipe hat, and is often described as the “stovepipe hat wreck,” and the 1867 wreck of the Flambeau at New Inlet (in New Hanover County, near Fort Fisher).

Subsequently, Fred Mallison, the North Carolina Tourism Bureau (with the help of a staged photograph), local Hatteras Island residents, and others repeated the story uncritically, and frequently enough, for it to become an oft-repeated, and believed, Outer Banks legend.

I am disappointed to discover that thousands of top hats probably never washed up on the shores of the Outer Banks, that islanders did not strut around their villages on Easter Sunday morning bedecked like President Lincoln, and that this colorful Hatteras Island legend is just that…a legend.  But a great legend it is! As someone once said to me, “it’s a damn poor piece of cloth that can’t take a little embroidery.”