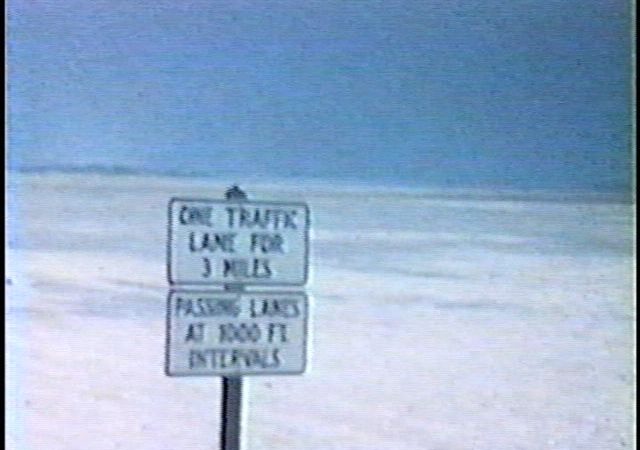 In 1942 the Navy paved the first road on Ocracoke Island. Islanders called it the Ammunition Dump Road. From the Navy base (which included the Coast Guard Station property, as well as where the National Park Service Visitors Center, public parking area, Ocracoke Preservation Society Museum, and public docks are now located) the one-lane concrete road ran along the harbor, turned at the Anchorage Inn, turned down the Back Road, turned again by the Ocracoke Coffee Company, then T-ed. From the T the Navy provided concrete aprons. It was there that they dumped spent ammunition shells and other wartime debris.

After the war the Navy vacated their buildings, and Ocracoke was forever changed. By the early 1950s more concrete roads were laid down around the northern shore of Silver Lake (in front of the Community Store), and past the Island Inn (then called the Silver Lake Hotel), to the bald beach. From the Inn, another pavement was laid “down point” past the lighthouse.

For years Ocracokers had relied on the mailboat Aleta to carry them across the sound to see relatives, to shop, and to visit doctors and dentists. Few had ventured to bring motor vehicles to the island before the roads were paved. 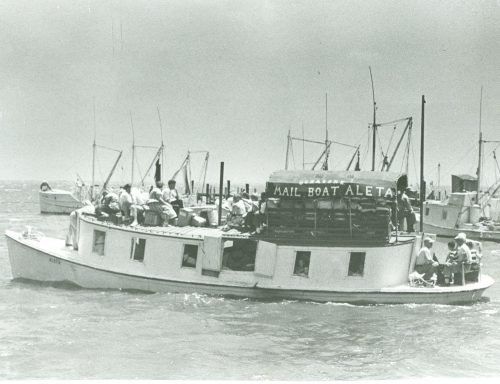 In 1950 Frazier Peele from Hatteras started the first car ferry service across Hatteras Inlet.  At that time there was no paved road from the inlet to Ocracoke village. Typically, Frazier operated his service at low tide, when cars could travel the hard-packed sand at the edge of the surf. It was an adventure to drive onto Frazier’s homemade barge, cross a sometimes rough inlet, disembark by driving through shallow salt water, then negotiate an uneven beach fraught with patches of quicksand, broken shells, and timbers from wrecked sailing vessels. 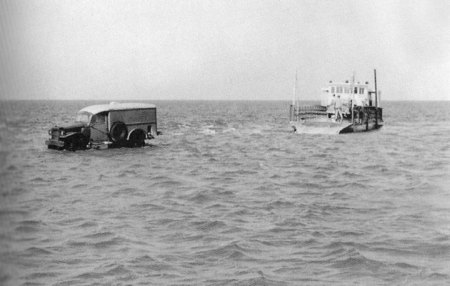 Near the village the adventure continued as cars gathered speed and raced across the “Plains,” an area of tidal flats and soft sand that stretched from the very edge of the village (near where the Variety Store sits now) to “First & Second Hammock Hills” (across from the NPS campground). Not a blade of grass, shrub, or tree graced the area (with the exception of the occasional small dune crowned with sea oats). Today that stretch is thick with myrtles, yaupons, cedars, and other vegetation.

By 1956 many of the sandy lanes in the village had been paved with asphalt, and a hard surface road was constructed from the edge of the town to the beach about three miles from Hatteras Inlet. Soon thereafter WWII metal landing mats were laid down between the new state-operated ferry landing and the aspalt road. The mats were only one lane wide, with turnouts every 1000 feet. Drivers of vehicles traveling in opposite directions would have to guess who should pull off to let the other pass. Sometimes neither guessed right and one driver would have to back up to the nearest turnout. Driving off the mats was guaranteed to get the vehicle stuck in the soft sand.

Several years ago I was given an 8mm home movie taken in 1956 or 1957. Although the visitors who took the movie had arrived by mailboat, they traveled to the north end where they shot several scenes. Clayton Gaskill was kind enough to capture several dramatic views from the movie, reproduced below. The first scene is a composite that Clayton put together from several frames. The white space at the top and bottom is just that (white space) where he “feathered” the edges as he joined individual shots together. However, notice the wide sandy tidal flat stretching from the ocean (on the left) to the sound (beyond the right border). Bones of a nineteenth century shipwreck are visible in the sand to the left (along with the top of a sign and post in the extreme bottom left corner). The landing mats curve off into the distance behind the truck. A sign warns drivers, “One Traffic Lane for 3 Miles. Passing Lane at 1000 Ft Intervals.” Between the truck and the sign, in the distance, are small hills covered with scrag cedars and other vegetation.

Below are three individual segments of the above photo (they’re fuzzy and indistinct in places, but are the best I’ve got). 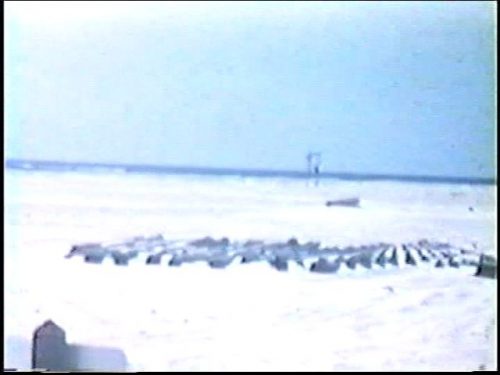 The Truck and the Landing Mats (Power Poles in the Distance): 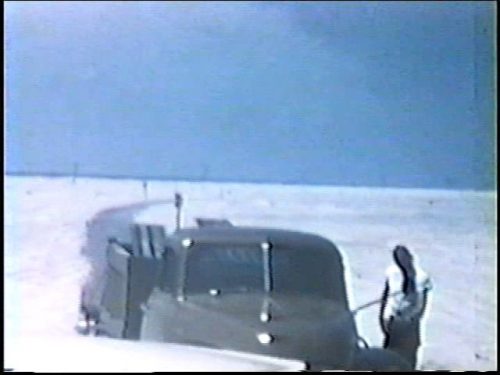 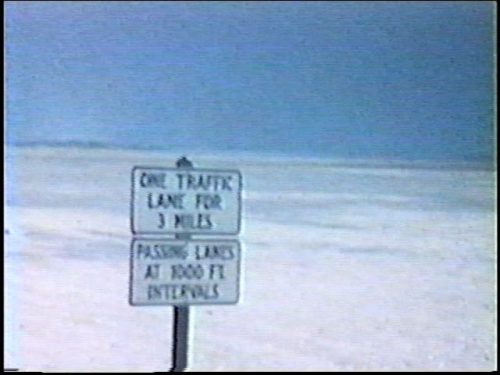 Soon after this movie was taken the landing mats were removed, and the paved road was extended all the way to Hatteras Inlet. During this period the continuous row of dunes was created between the road and the Atlantic Ocean. Many people are unaware that this dune line is largely artificial. Although there were scattered natural dunes here and there along the beach, the construction of a continuous protective dune was authorized to keep high tides from washing across the newly built paved road.

Low areas were most prominent at the north end, around the present day pony pen, and at the Plains. Before the artificial dunes were built the Plains (from the edge of the village to the campground) and the three miles to the South Point were prime nesting areas for shore birds. The new dunes (built by successive layers of slatted wooden fencing covered by blowing sand, then planted with sea oats and other beach grasses) prevented ocean overwash, thus protecting the highway, but changing the ecology by allowing the growth of grasses, bushes, and trees where birds had nested…and later on, the introduction of nutria, mink, rabbits, rats, snakes, and feral cats, many of whom preyed on the eggs of the remaining shore birds.

Today, most visitors, many National Park Service employees, and even newer residents and younger natives are unaware of the dramatic changes brought about by the construction of paved roads and a protective dune line on Ocracoke Island. We may not want to return to the way things were before World War II, but we should at least know what has happened.