Tag: Pearl of the Outer Banks

Ocracoke has been a tourist destination for much longer than most people realize.

In 1795 Jonathan Price produced a map, “taken by actual survey” of Occacock Inlet, that included descriptions “of its COASTS, ISLANDS, SHOALS, and ANCHORAGES: With the COURSES and DISTANCES to and from the most Remarkable Places, And DIRECTIONS to sail over the BAR and thro’ the CHANNELS.”

Price’s map was accompanied by a document entitled “A DESCRIPTION OF OCCACOCK INLET.” In this document he describes Ocracoke village as having [s]mall live oak[s] and cedar[s] grow[ing] abundantly over it, and…[containing] several swamps and rich marshes….”  He ends by commenting that “this healthy spot is in autumn the resort of many of the inhabitants of the main.”

For most of the next one hundred years, travel from inland North Carolina towns and cities to the coast, then across Pamlico Sound, was limited to horse-drawn vehicles and sailing vessels.

In 1870 the Elizabeth City and Norfolk Railroad was established. Although construction of the 46 miles of track did not begin until 1880, finally, in May, 1881, the last section of track was laid, connecting the two cities. Six months later the railway was extended to Edenton, North Carolina.

In 1882 the Elizabeth City and Norfolk Railroad expanded its operations again by signing a five-year contract with Norfolk’s Old Dominion Steamship Company. Steamships would provide passenger and freight service from Elizabeth City to New Bern and Washington, North Carolina.

One year later the EC&N Railroad changed its name to the Norfolk Southern Railroad Company, reflecting its ambitions to expand operations farther south.

Although Elizabeth City’s deepwater port had long attracted commercial interests, including lumber mills, shipbuilding, and grain, fish and oyster processing companies, the coming of the railroad brought economic decline to the waterfront. However, steam powered excursion vessels taking summer vacationers to the up-and-coming resort at Nags Head provided a measure of compensation.

In 1885 entrepreneurs from Washington, North Carolina, recognizing the potential for profit on Ocracoke Island, built a large Victorian hotel on the sound shore, near where the decommissioned U.S. Coast Guard Station stands today. Prior to this time occasional visitors to the island stayed in private homes or in small boarding houses. Many of these folks were anglers and hunters who thought the abundance of fish and fowl more than compensated for the Spartan accommodations and difficulties of getting to Ocracoke.

The new Ponzer Hotel catered to well-heeled ladies and gentlemen, as well as to fishermen and hunters. Two stories tall, and topped with a gable roof, dormers and cupola, the hotel boasted wrap-around verandas on both floors. Moses Fowler served as the original innkeeper. 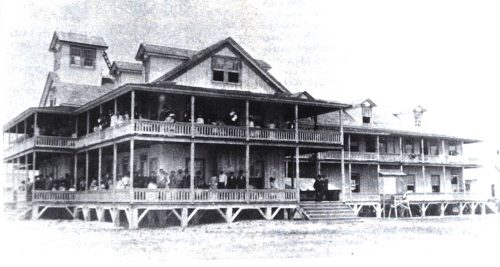 Steamers of the Old Dominion Steamship Company, carrying passengers between Elizabeth City, New Bern and Washington, began discharging vacationers at Ocracoke. Because of shallow water, the steamers stopped at a “lay boat,” the Fred Walton, a  three-masted schooner, which was anchored a mile or so from the island. A smaller boat then carried passengers, luggage and freight from the lay boat to the shore-side dock of the hotel. Some time before the summer of 1899 the dock was extended to the steamboat channel. 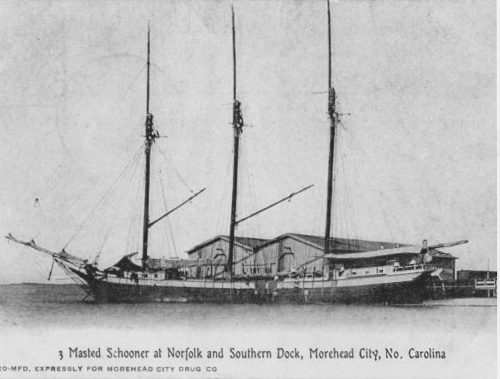 The Ponzer Hotel quickly became the center of summertime social activity on the island. Live music, square dances, parties and other events attracted locals as well as off-island guests. Success fueled growth, and in 1886 the hotel was enlarged with more rooms and a dining hall.

In 1887, at the conclusion of its contract with the Old Dominion Steamship Company, the Norfolk Southern Railroad began operating its own steamers.

By then the Spencer brothers of Washington, North Carolina had purchased the Ocracoke Hotel. A promotion in the July 16, 1891 newspaper, “The Wilson Advance,” advertised accommodations (including board) at $10 per week, or $30 per month. Guests were assured of Health, Strength, & Pleasure, along with Fishing, Surf-bathing, Sailing, Music, Dancing, and an abundance of Oysters, Clams, & Fish.

1891 Newspaper Advertisement for the Ponzer Hotel:

A horse-drawn wagon carried guests to the beach.

The Old Dominion steamer R.L Myers carried passengers from Greenville to Washington three days per week, leaving at 5 a.m. on Tuesdays and Thursdays; and at 7 p.m. on Saturdays. At Washington passengers embarked on the elegant, 154 ton railroad-owned steamboat Alpha for the eight hour trip down the Pamlico River and across Pamlico Sound. Several sailboats also made regular trips to Ocracoke, arriving early Sunday morning.

Steamer traffic was so robust that, at the turn of the 20th century, an agent of the Norfolk & Southern Railway, George Preston Hassell, was living on Ocracoke. While visiting Ocracoke on official business he had met and married island native, Ida Ballance.

According to Cecil Bragg, in his book Ocracoke Island, Pearl of the Outer Banks, at least four other steamships brought passengers to Ocracoke: 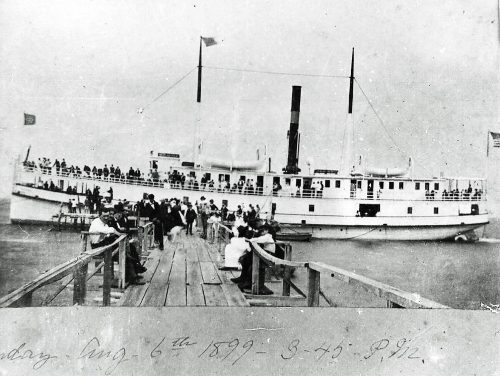 According to Ursula Loy and Pauline Worthy in their 1976 book, Washington and the Pamlico, “Ocracoke Island in those days was very much more interesting, exciting and pleasurable than today…. People would inhale the fresh salt air and feel a sense of freedom soon after arrival. They would fish and swim in the daytime and squre dance every night…. The island was crude and undeveloped, the natives were friendly and would go out of their way for everyone to have a good time. They had a brogue peculiar to the coast and the sea, which the visitors loved, but could rarely imitate or impersonate.”

In 1902 the Old Dominion steamer Ocracoke struck and sank a schooner near the mouth of the Neuse River. The crew and passengers of the schooner were rescued. The incident was investigated, and the officers of the steamer were exonerated.

Again, in 1905 the Ocracoke, bound from New Bern to Elizabeth City, collided with another vessel, this time in dense fog. The pleasure sloop Ray was nearly cut in two, and sank quickly. Although one passenger on the sloop was knocked overboard, he was rescued along with the rest of his party.

The Ocracoke was sold to the Norfolk & Mobjack Bay Steamship Company in 1920. The steamer continued to operate for several more years in the Chesapeake Bay.

The Ponzer hotel changed ownership once more, in 1899. Two brothers, George Credle of Hyde County, and Griff Credle of New Bern, operated the hotel until the spring of 1900.

A fierce hurricane, the “Old August Storm,” pummeled Ocracoke island August 17, 1899, and the anchored, 135′ lay boat parted her chain and was wrecked on Hog Shoal. The storm also did considerable damage to the dock and the hotel, including ripping away the roof of the second floor veranda. The building and dock were quickly repaired, but the unrigged Fred Walton, which had ceased to be used, was never salvaged. The lay boat remained submerged on the shoal for more than 100 years. In 2003 Outer Banks air tour pilot, Dwight Burrus, while flying over the shoal, noticed the outline of the vessel on the sandy bottom. Since then, Surface Interval Diving Company (SIDCO) has been researching, excavating, exploring and recovering artifacts from the Fred Walton.

The Ponzer Hotel after the August, 1899 Hurricane: 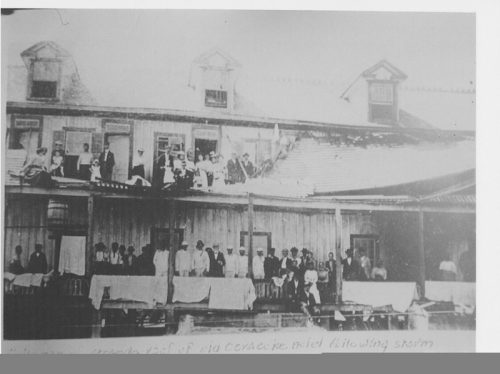 Unfortunately, the hotel fell victim to another catastrophe in the spring of 1900 when an unwatched stew pot boiled over, and the grease from the stewed goose ignited. By the time anyone noticed, the fire had become a conflagration. The hotel was completely destroyed.

Even after the Ponzer Hotel burned, tourists continued to come to the island, but the age of the steamboat was coming to an end. Many visitors stayed at the Taylor House, a less pretentious hotel owned by Washington native, Steven G. Taylor, and his Ocracoke wife, Augusta (“Miss Gus”) Gaskins Taylor. Passengers, as well as freight, arrived on bugeyes, sailing vessels that replced the steamships..

In 1913 the Taylors sold their establishment to Capt. Bill Gaskill who renamed his business the Pamlico Inn. The Pamlico Inn catered mostly to anglers and hunters. 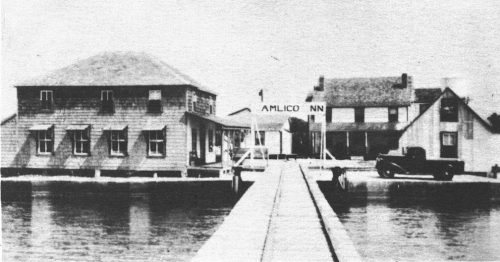 By the end of the first decade of the twentieth century sportsmen from the northeast were arriving at Ocracoke via the Old Dominion Steamship line to Norfolk, then taking the Norfolk & Southern Railroad to Beaufort, NC. From Beaufort they took the mail boat to Ocracoke.

A 1911 article in Field & Stream magazine mentions the Pamlico Inn as having “good arrangements” but adds that they are “not suitable for ladies.” Two more articles, one in 1908 and another in 1911, describe Capt. Bill’s houseboat, the “Honk,” as the perfect accommodations for shooting ducks, geese, and brant (in season), as well as shore birds (in August and September). The wild fowl were described as “very abundant.” Rates were $10, including “everything, guide, boats, decoys, etc.”

The Pamlico Inn was destroyed in the great hurricane of 1944.

One Building of the Pamlico Inn, after the 1944 Hurricane: 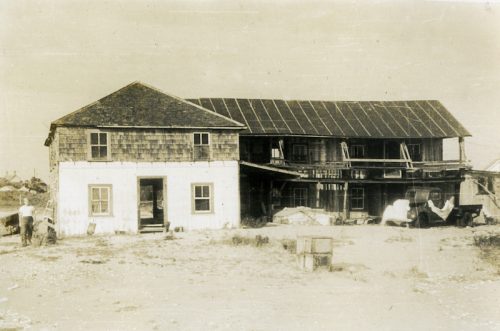 Cecil Bragg, in his 1973 book, writes that “The old steamboat dock is now history…. The younger islanders never even knew of its existence. There isn’t even a barnacled, eaten pile left to show where it once stood, and yet, to a few, the memory of it is still vivid….”

Today, even the “few” are gone. Only a handful of photographs, yellowed newspaper clippings, and several written accounts are left to tell the story of elegant Victorian ladies and gentlemen vacationing on Ocracoke at the old Ponzer Hotel.