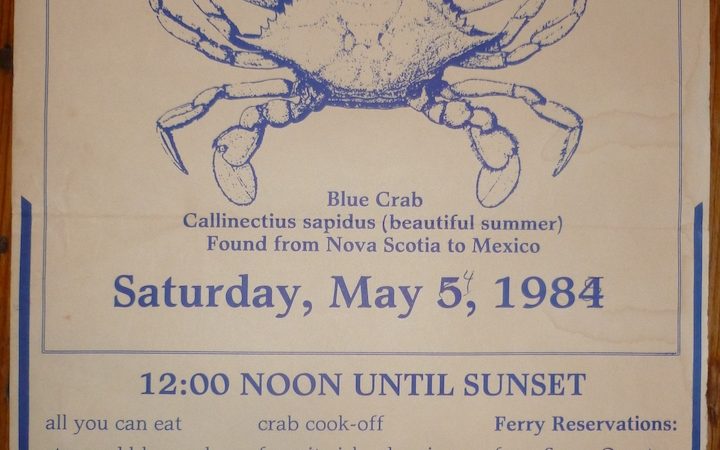 From 1984 to 1989 the Ocracoke Civic Club Business Committee hosted an annual Ocracoke Crab Festival in early May. The Festival was a popular event featuring crab races, a crab cooking contest, a crab picking contest, and crab pot pulling demonstrations. 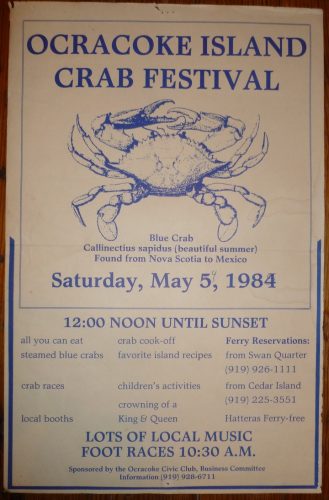 Folks arrived from all over eastern North Carolina, as well as from more distant areas and surrounding states. Ultimately the Festival was the victim of its own success. Crowds of festival goers overwhelmed the capacity of the Ocracoke community to provide for them and to control the spontaneous and after-hours partying. After six years, the Ocracoke Crab Festival was discontinued.

Ten years later the Ocracoke Music & Storytelling Festival filled the gap. Oriented towards a mellower crowd, this festival¸ as its name suggests, featured a variety of local, regional, and national musicians as well as popular storytellers, magicians, and jugglers.

After 15 years, the more recent Music & Storytelling Festival continues to be a fun-filled weekend with dozens of arts and crafts booths, children’s activities, an art auction, and a local square dance, in addition to music and storytelling.

The following articles are reprints from newspapers reporting on the earlier Crab Festival. First is a description of the 1984 Festival; following that is a report about the Festival two years later. (Photographs were added.)

Many people seemed to think that Saturday, May 5 was the prettiest spring day of the year. It was a beautiful sunny day for Ocracoke’s first Crab Festival, which was sponsored by the Business committee of the Ocracoke Civic Club. Friday, the day before, was cool and breezy, while the day after was rainy. The festival spread from the yard of the Berkley Center [Berkley Manor] to the National Park Service docks. An estimated 1000 people participated in the festival. Ferries from Swan Quarter and Cedar Island unloaded several loads of cars and passengers throughout the day. The festival was also supported by many local people. For $3.00 you could eat all the steamed crabs you wanted plus coleslaw. Over 1,800 pounds of crabs and nine kegs of beer were consumed.

The Crab Festival started with foot races to raise money for Brian Newell, a small child who recently had serious eye operations. The entry fee for the races was $7.00. There were 32 runners in the races….

At noon, there was a cook-off contest for the best crab food. The winners were first place, Francis Bessellieu, who made a crab casserole; second place, Margie Loebsack, who made crab cakes; and third place, Philip Howard, who made a crab quiche. Honorable mention went to Annie Moore Styron, of the the Pony Island Restaurant, who made egg rolls. 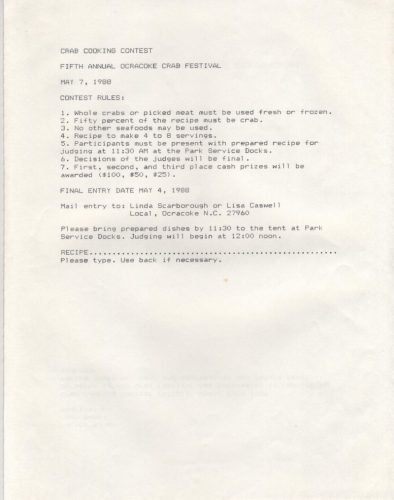 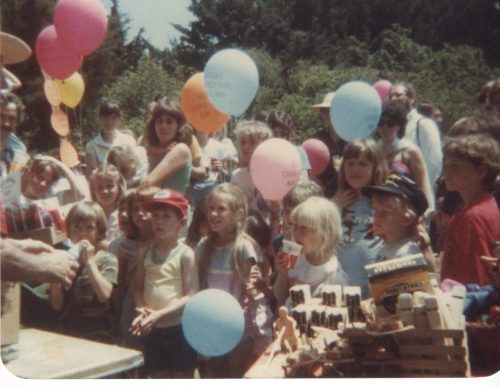 There were booths set up by different organizations on the island such as the boy scouts, girl scouts, ladies auxiliary, school journalism class, and businesses such as Noah’s [a deli where Oscar’s House B&B is today], Merchant Mariner [a gift shop near Captain’s Landing Hotel], and Books and Birds [a gift shop where the Island Ragpicker is now]; even personal booths were set up by Stephen Wilson, Ralph and Jennifer Stetler, and Wayne Wescot from the Marine Resources Center in Manteo. There were baked goods, drinks, beer, hot dogs, t-shirts, and balloons for sale. There was also a raffle for a buttercup quilt. 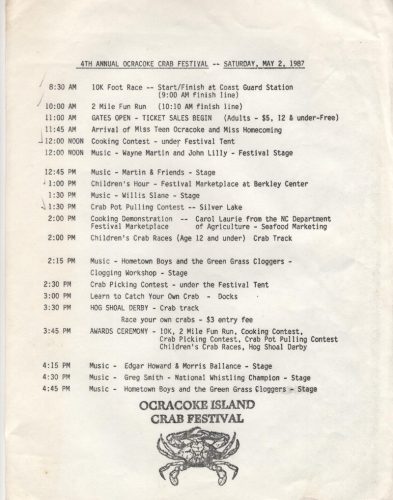 At 1:00 there was a children’s hour. Philip Howard and his son, Stefen, did juggling. Philip juggled fire. Robert Payton from Richmond, Virginia did a magic show. Betty-Sue Garrish was dressed as a clown. Guy Newell taught kids to catch crabs with strings. 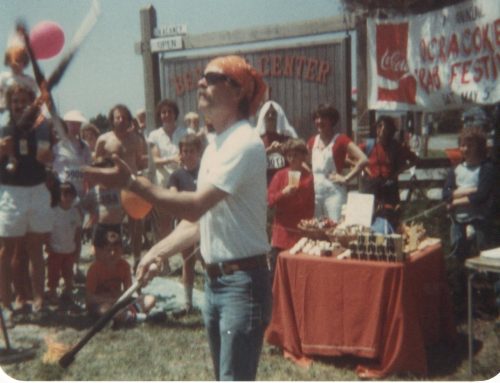 At 2:30 there was a crab picking contest. The object of the contest was to see who could pick the most crab meat….

At 3:00 there was the King and Queen contest. The winning couple was Donna and Dal Burrus. They were crowned by Miss Hyde County, Lamarr Fletcher, who is from Ocracoke. They will be treated to two nights at the Mariott in Raleigh, plus spending money at the Crabtree Valley Mall and dinner and entertainment.

As the sun went down the festival came to an end. Most people enjoyed themselves and those who had stayed all day went away with sunburn.

“We were overwhelmed over the success of the festival,” said David Senseney, chairman of the Ocracoke Civic Club Business Committee, the sponsoring organization.

“I said from the beginning that we would grant the festival a success if only the people of Ocracoke came out and had a good time, and we covered expenses. They did, of course, and much, much, more…. It was a real joy to watch the local kids at the crab races and the children’s activities.”

Ocracoke – the third annual Ocacoke Crab Festival, held last weekend by the docks of Silver Lake, attracted an enthusiastic crowd of folks who know how to appreciate the qualities of Callinectes sapidus, the tasty blue crab. And plenty of people came to learn how.

You break off the legs, the sponge, the back; scoop out the lungs and organs. Break into halves, bending the meat outwards, and eat. Wipe your mouth on your sleeve, toss the shell into the harbor, and you take a sip of beer and start again.

Truckloads of steamed blue crab, turned red from cooking, provided an inexhaustible supply of the “ beautiful swimmer.” Scooped by the handful onto cardboard trays, the steamed crabs were accompanied by cups of cocktail sauce, slaw and beer. A worker sometimes paused to demonstrate the accepted technique for gutting and splitting crab and devouring the delicate white meat.

People sat with their cardboard trays on the grass or on docks, legs dangling over the side, and leisurely picked their way through a generous pile of steamed crab.

Local craftsmen set out their goods in a small grassy park across the street. Among the weaving, baskets and quaint island scenes rendered in pastels on canvas, weathered boards, and seashells, were long tables of cakes, pies, cookies, clams and hot dogs – after all, not everyone can appreciate steamed crab.

A small stage was set up for singing, clogging, ribbon-awarding and the crowning of a festival queen. A tent next to the stage was home for the crab-picking contest, and a few yards away was a slanting wooden track for the Hog Shoals Derby crab race.

But the favorite crab event was eating the tasty meat.

… and you take a sip of beer and start again.