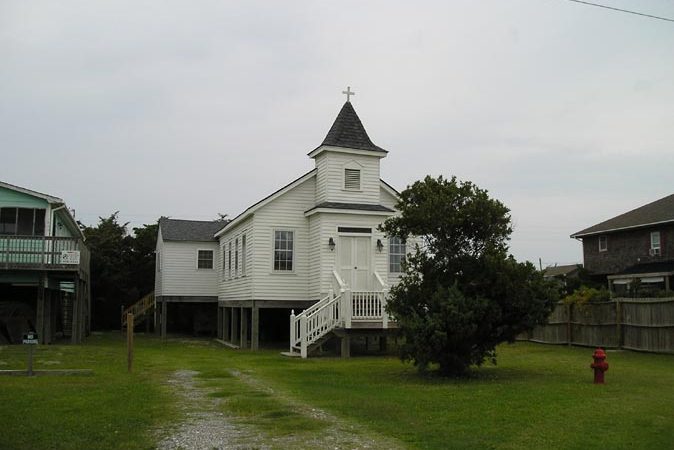 Ocracoke’s first house of worship was the Methodist Church, established on the island in 1828.  The congregation met in several different buildings over the years.  In 1844-1845 a schism erupted in the national body over the issue of slavery, and the Ocracoke charge then came under the care of the Methodist Episcopal Church, South. 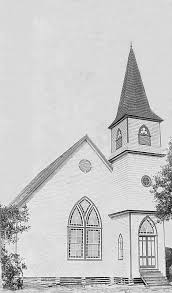 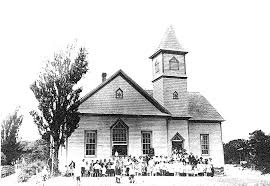 In 1937 the national bodies reunited. Throughout 1938 the newly unified Ocracoke congregation continued to meet in the two different church buildings.  Old rivalries were being laid to rest in a new spirit of cooperation.  Eventually both churches were dismantled and a new building was constructed. 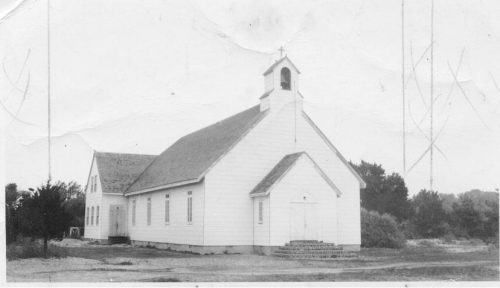 In 1938, while many Ocracoke residents were learning to adjust to the changes in their religious institution, members of the Pentecostal/Holiness tradition began to proselytize on the island.  At that time Mr. Bertie Dixon and his wife, Eva, began holding “preaching services” at the schoolhouse.  In July, Miss Alice Austin, an evangelist from Buxton, NC, came to the island to hold revival meetings.

Miss Alice was accompanied by Robert Hancock, a Georgia native who was then working at the Civilian Conservation Corps camp on Hatteras Island.   Mr. Hancock played guitar and offered any other assistance needed.  Miss Alice’s sisters, Ruby and Doris Jennette, and Mr. Frank Miller and his wife, Angeline, also participated in the revivals.

The island was ripe for revival.  For years, Ocracokers had wrestled with reconciling their faith with the reality of a divided church, now on the cusp of an uncertain unification.  Miss Alice’s simple message of forgiveness and salvation hit a resonant chord.

Without a building, Miss Alice relied on the good will of Elizabeth Styron (better known as Aunt Bett), who offered the use of her front yard for services.  Aunt Bett’s home was “down point” where Charles Mason’s new home stands today.   The services were lively and spirited.  As a result, more than a dozen islanders accepted the invitation to “accept Jesus as their personal savior.”

On August 16, 1935 the Schooner “Nomis” had run ashore at Hatteras Inlet. Caswell and Zilphia Williams’ sons, James and Charlie, were among those islanders who had hauled home a significant quantity of lumber from the wreck.  The Williamses donated part of the lumber, and several men worked at building crude benches for the outdoor congregation.  Miss Alice preached from Aunt Bett’s front porch.

The revival lasted only two weeks, but a seed was sown.  Sixteen islanders responded to the altar call.  After the revival regular services were begun, but now they were held in different people’s homes.  Eventually, as the congregation grew and the weather turned colder, Aunt Bett allowed the worshipers to close in her back porch for use as a church.  At first they had no pastor.  Services were held with lay leaders, although both Alice Austin and Robert Hancock returned for short periods to shepherd the fledgling group.

It wasn’t long before the new Holiness congregation recognized the need for a regular church building.  Aunt Bett’s back porch had quickly proved inadequate.  Again Aunt Bett demonstrated her new-found faith and donated the lot next door to her house.

In 1940 Mr. Stanford Jackson, an octogenarian island carpenter and recent convert, offered to build the new church if the materials could be procured and several helpers found.  Eliza O’Neal’s sons, John Thomas, and his bother, Steve, and several others volunteered their time.  Construction was begun in 1941 and continued into 1942.  Sanford Jackson built the first pews as well.

An article in the “Ocracoke Beacon,” dated October 15, 1941, recalls, “Stanford Jackson, expert craftsman, who can make anything from a fiddle to a ship model, with his pocket knife, is now completing a much bigger job.  For several months, Stanford has been engaged (almost single-handed) in building the little church down on the Point Road which will be the place of worship for islanders of the Holiness Pentecostal faith.  The church is almost completed, and Stanford Jackson deserves praise for the fine job of carpentering he has done in building this place of worship.”

When the church was completed Miss Alice Austin returned to the island for the dedication and preached the first sermon.  Reverend Wells was the first salaried pastor the church called.  His daughter, Beatrice Wells, a 16 year old child evangelist, came with him and held a revival on the island during which several more people joined the flock.

The second pastor was Reverend W.G. Mizelle, who boarded with Mrs. Eliza O’Neal.  In January, 1943 Rev. Mizelle’s sister, Mildred, came to spend a week with him at his new charge.  While there she met John Thomas O’Neal and she stayed a full month.  Unfortunately John left in February to serve in the military and was gone for three years.

As a testimony to their newfound connection, John and Mildred wrote to each other every day, from February, 1943 to January, 1946.  John had only one furlough during his entire military service.  He spent two days with Mildred at her family home, and two days on Ocracoke with his mother.  When John told his mother that he only had four days leave, she wondered out loud, “If that’s all the time you had, what are you doing spending half of it here?”

John and Mildred were married February 5, 1946, less than two weeks after John was discharged from the service   Together they remained pillars of Ocracoke’s Assembly of God.

Alice Austin continued her support for the Ocracoke congregation over the years by serving on an interim basis between pastors.

On September 14, 1944 a fierce storm pummeled Ocracoke Island.  Winds were estimated at over 100 mph, and tides were running at fourteen feet.  The entire island was under water as powerful waves crashed into boats, homes and businesses.  Six houses were completely destroyed, as was Capt. Bill Gaskill’s Pamlico Inn and docks on the sound shore.

The Holiness Church was not spared.  It was washed off its foundation and the chimney was totally destroyed.  Members of the congregation soon rallied to repair the damage.

Reverend Glenn Lawrence was called as pastor immediately after the ’44 storm.  When asked by friends where he was going, Rev. Lawrence replied, “Ocracoke.”

“There ain’t so much as a cat alive down there!” he was told.

In truth, Ocracoke Island has never suffered a hurricane-related death in spite of a number of violent storms.  Mr. Lawrence stayed for two years.

During World War II the U.S. Navy constructed a sizeable base on Silver Lake Harbor.  Although barracks were built, housing was still in short supply, especially for officers and their families.  The commanding officer contacted Mrs. Eliza O’Neal and asked permission to rent a small, unused structure for one of his men and his wife.

Mrs. O’Neal considered her building “not hardly fit to live in,” but she rented it nevertheless.  Not long afterwards she hailed Rev. Lawrence and beckoned him over to her yard.  Mrs. O’Neal’s new neighbors, the Navy couple, were cooking steaks, a scarce and coveted commodity on the island at the time.

“Do you smell that?” Mrs. O’Neal asked, turning toward the succulent aroma, and licking her lips.  “I’ll tell you one thing, Brother Lawrence.  If I had a biscuit I could stand right here and eat my supper.”

In 1946-1947 a parsonage was built next to the church with lumber donated by Thurston Gaskill, whose father operated the old Pamlico Inn that was destroyed in the 1944 hurricane.

On April 25, 1947 the ten enrolled members of the island Holiness church made application to the Assemblies of God, requesting approval to join their denomination.  An official letter approving the application was sent exactly one week later, on May 2, 1947, recognizing the Ocracoke church with a certificate of acceptance.

In 1948 several buildings were moved from the decommissioned World War II Naval Base, and attached to the back of the church for use as Sunday School rooms.

Tragedy struck again six years later.  It was November 3, 1954.  Reverend Ernest Powlesland had just preached his last sermon on the island and his replacement, Reverend Walter Whitaker and his family were moving into the parsonage.  That night a raging fire broke out in the pastor’s home.  In spite of valiant attempts by islanders to fight the fire with a bucket brigade their efforts failed and the building burned to the ground.  To everyone’s relief, however, the fire was contained and the church itself was saved.

Both pastors and their families were fortunate to escape the fire unscathed, but all of their personal belongings were destroyed.  Immediately islanders pulled together to help the unfortunate clergy.  Clothing, food, money, and toys were collected to help them recover their losses.

Pastor Whitaker remained on the island to serve the congregation.  He lived in the Sunday School rooms until a new parsonage was constructed in 1955.

In the late 1970’s Ronnie Midgett, with family in tow, came to Ocracoke straight out of Bible college.  He didn’t have a church, and Ocracoke’s Assembly of God didn’t have a pastor.  They teamed up for the summer, and just before school started the church members voted to call him as their preacher.  He stayed for three years.

Ronnie’s wife, Diane, remembers with a smile young Joseph Gaskill’s startled, candid, and quintessentially island comment when hearing for the first time the biblical story of the raising of Lazarus from the dead after four days: “Why Lord, he’s ranketh by now.”

Diane also remembers church members assuring her that they would pound the preacher and his family once a month.  Not knowing that “pounding” was an old island expression for providing the preacher with much needed supplements to his meager salary (a pound of sugar, a pound of flour, a pound of shrimp, etc.) Diane told Ronnie that she had heard that Ocracokers were a rough crowd, but she hadn’t expected them to be that rough!

Once, when Ronnie was fired up with the spirit he preached that he wanted to be like the Hebrew prophets and “dance naked in the streets” (meaning, but not explaining, that he meant naked in the Biblical sense of being unencumbered by his priestly garments).  On hearing this sentiment, Irma Foster, one of the founding members of the church, blurted out loud the only island exclamation that seemed appropriate, “Dey, Blessed Father!”

On one occasion Diane needed Ronnie to come home to take care of a household chore.  She called out to the Tradewinds Tackle Shop, thinking he might be there.  Louise O’Neal answered by explaining that Wayne Teeter thought Ronnie should be “down below” [a traditional island expression indicating anywhere from the edge of the village to the Hatteras ferry landing].”  Not understanding the local vernacular, Diane was concerned that Ronnie’s parishioners thought so little of their new preacher that they’d already decided where he should spend eternity.

The congregation has continued to flourish.  At the turn of the twenty-first century a major building project got underway with the construction of a sizeable addition to the back of the church.  This structure includes a spacious apartment for the pastor and his family, as well as large, modern Sunday School rooms.  The old parsonage was sold and moved to Highway 12, to be used as a rental cottage.  The church was moved in the fall of 2003. The new owners have converted it to a cottage as well.

Moving the Assembly of God Church:

The Church Reborn as a Rental Cottage: 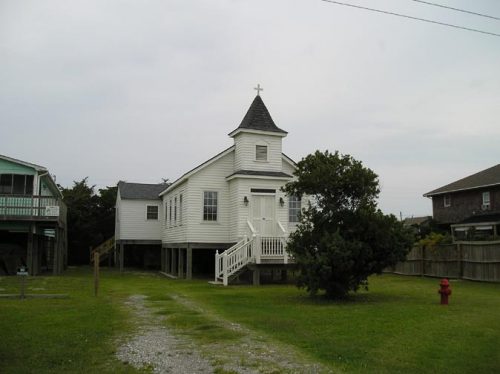 A new facility with moveable chairs, stained glass windows, and modern audio-visual capability was soon built to serve the needs of the Assembly of God’s twenty-one members and considerably more attenders and friends. 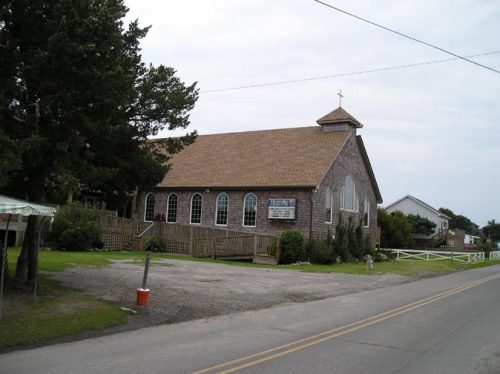 Special thanks to John Thomas and Mildred O’Neal for much of the information above.