The Ocracoke – Washington Freighters: The Last of an Era of Maritime Commerce
(Reprinted from the Newsletter of the Historic Port of Washington Project, November 15, 2020, by Blount Rumley)

Since the first colonists came to occupy the Outer Banks of North Carolina there was the need to supply those islands with the items necessary to support a community; material that the community could not generate for itself. In return, the banks inhabitants sold wares of the sea, operated trading ports, and later furnished a place to relax from mainland life.

Nearby coastal mainland towns were the logical link to the Outer Banks, as they had the needed transportation and service connections to other parts of the country. Washington, North Carolina, was the primary connector to Ocracoke, and there was a strong commercial and social relationship between them.

Individuals and commercial entities from opposite ends of the trading route operated vessels to carry goods back and forth. Another class of vessels transported passengers, mail, and small items, but addressed here are the boats that moved heavier materials and larger shipments. There were many vessels over the years; for example, Annie Wahab, Nellie, Mary S, Preston, Relief, and the ones below, that made the run in the twentieth century, the last of an era.

Owned by Capt. Ike O’Neal, she was a Bug-Eye, which carried Leg-O-Mutton sails. A gas engine was installed at a later date. On one trip she sailed from Ocracoke to Washington in a record 5 ½ hours, logging 12 knots. The motorized Bessie Virginia was never able to beat that time. She was the last sailing vessel on the run. She went aground near Ocracoke after a storm about 1922.

(The photo above is of a Bug-Eye similar to the Russel L.)

On one trip to Ocracoke a goat on board ate much of the jib, which was not being used at the time. The boat could not return to Washington on schedule until the jib had been repaired.

The vessel William G. Dryden, operated by Capt. Jesse Garrish, was similar to the Bessie Virginia but a little smaller, and was used on the Ocracoke-Washington run. She also ran from Ocracoke to Swan Quarter for a while. She was the first diesel-powered boat on the Washington route. 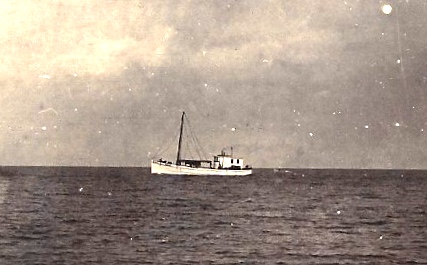 The Warren was an ex-military patrol boat converted as a freight-passenger boat. On January 26, 1950 the captain, Glenn Willis of Beaufort, was shot and killed in Washington by a crew member. That ended the approximately one-year life of that run.

The Maw Paw, owned by Kim Saunders of Washington, was in service for a short while after World War II. She was an ex-military aircraft rescue boat. Kim replaced the faster-running (possibly Packard) gasoline engines with more fuel-efficient diesels.

The m/v Bessie Virginia was built in Crisfield, MD about 1910 of California Red Heart Pine, with 3-inch thick planking. Her length was 64 feet, 11 inches, with a beam of 18 feet. Her draft was 5 feet, with a cruising speed of 10 knots. She had a Cummins diesel when purchased, and that was replaced by a Gray diesel in Swan Quarter. She was purchased in 1949 or 1950 by Capt. Van Henry O’Neal, and his father, Capt. Walter C. O’Neal of Ocracoke. The first mate from 1949 to 1961 was Powers Garrish. Her average trip time loaded was 7 hours, 15 minutes, but on one trip with a good tide she made it in 6 hours, 55 minutes (The above is a quote from Van Henry O’Neal). 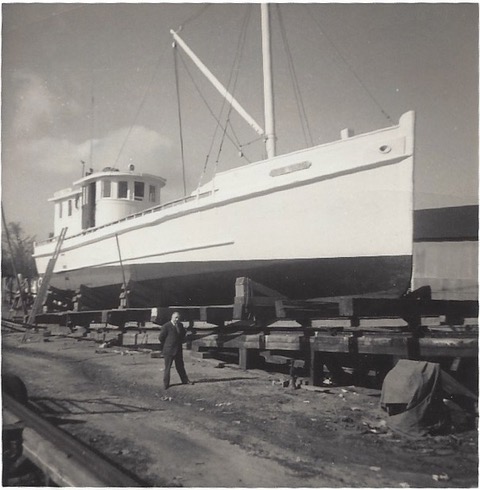 In addition to passengers, she carried practically anything that would physically make the trip. Henry Rumley helped back a house trailer broadside across the deck at Washington. In a very precise maneuver, Van Henry managed to guide it through the railroad bridge, and it seesawed its way to Ocracoke.

Note the Ocracoke photo showing the fuel drums that most always surrounded the pilothouse. Soft drinks always were loaded aboard, as were groceries from the local wholesale grocers. She carried medicines, clothing, building supplies, motor vehicles, passengers, livestock and anything else that would fit aboard. Van Henry could often be seen visiting Washington shops with a list of needed items from the Ocracokers.

On reverse trips to Washington she transported full loads of seafood destined for individuals and wholesalers.

When the state was paving the first roads on Ocracoke, the Bessie Virginia brought in from Norfolk all the concrete for the job; 17,600 one hundred pound bags. It took a few trips to Norfolk to do it. (Quote from Van Henry, 1992)

During World War II, the navy hauled in their own concrete to build the road from the navy base to the ammunition dump.

(The photo above is the Bessie Virginia at the Naval Base (later park service) dock at Ocracoke.)

By 1961 the state ferries, bridges, and Highway 12 had been dramatically improved, and with it came the inevitable decrease in the need for the coastal freight vessels. In February, 1961 the Bessie Virginia reduced its Washington run to every two weeks. On May 25, 1961 Van Henry sold the Bessie Virginia and discontinued the service to Washington. Van Henry delivered the vessel to its buyer in Norfolk, Virginia. His son, Ronnie Van went with him, and Ronnie Van joined the coast guard the next day.

That ended an era that began at least 180 years earlier.