In 1978 Ron Howard, direct descendant of an early colonial owner of Ocracoke Island, decided to build a pub on his property at the edge of Ocracoke village.

Many years before, in May, 1937, the Hyde County Board of Commissioners, in response to a petition signed by 132 “citizens, taxpayers, and voters,” had passed a resolution to ban the sale of beer on Ocracoke Island. Not everyone was opposed to drinking, however. As Ron’s father Edgar quipped, there were two branches of his own Howard family on Ocracoke…the church-going Howards and the meal wine-drinking Howards! 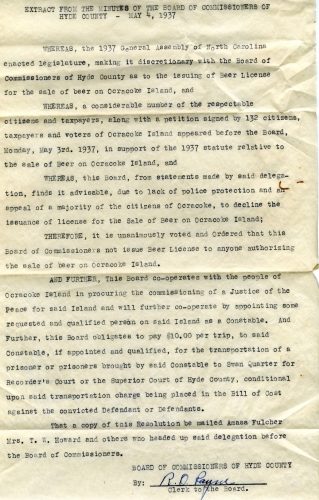 By 1978 times had changed, and many islanders as well as visitors were looking forward to the new bar. Only a few staunch Methodists voiced opposition.

Ron contracted with Sammy Fortesque, a colorful island carpenter, to build his pub. Sammy had lost one eye in a childhood accident, and had been fitted with a glass replacement. One evening at a local dance Sammy had too much to drink, and somehow lost his artificial eye. He never found it; and never had it replaced. From then on he sported a black eye patch.

“One-eyed Sammy” as he was known, was smart, talented, and laughed easily, his infectious smile revealing several missing teeth. By spring, 1979, Sammy had completed construction of Howard’s Pub, the building on the southwest side of Irvin Garrish Highway where “Red” and Ashley Harrell eventually established Gaffer’s Sports Bar.

Ron opened for business in April, 1979. For the first time in more than half a century islanders and visitors could order a cold beer in a local restaurant. Ron’s 77-year-old father, Edgar Howard, remarked, “We’ll have hard-core hippies, hard-core Yankees, and hard-core Southerners. We’re going to mix them all and I hope they all get along!”

Things didn’t always go well, however. At that time law enforcement on the island was minimal. And in stormy weather dozens of shrimp trawlers tied up at the docks in Silver Lake harbor seeking protection from the elements. The trawler crews always found their way to Howard’s Pub. 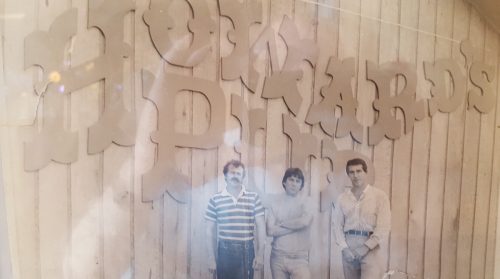 The shrimpers often imbibed copiously, and young waitresses were all too often plagued with unsolicited and rude comments. Stories are also told of Ron dodging bullets fired by angry intoxicated patrons in the parking lot. On December 15, 1979, a rancorous fight broke out involving the burly crew of a well-known shrimp boat. Ron’s brother, Richie, broke up the fight in what is remembered as a memorably “heroic fashion.”

In early September, 1980, the North Carolina Alcoholic Beverage Control imposed a 15 day suspension on Howard’s Pub as a result of the 1979 incident. The Pub reopened September 18, but Ron knew some changes were necessary. He needed to appeal to a different clientele. 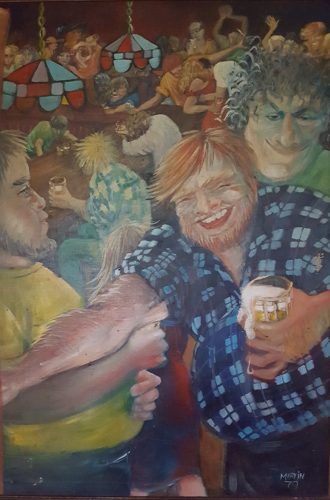 For the 1981 season Ron decided the Pub needed a makeover. He opened in the spring as a bar and deli, with no band. However, Edgar Howard, Ron’s father and talented banjo player, was available to entertain his son’s clientele. In the 1920s and 1930s Edgar had played the vaudeville circuit in several large cities, including New York and Philadelphia, with such notables as Gene Autry, Milton Berle, and Al Jolson.

Ron advertised his establishment as the “All New Howard’s Pub” with live music, Happy Hour from 2-7, and a Cabaret scheduled for the summer months at 11 p.m.. Cynthia Mitchell directed the Cabaret which opened with “Old Blue Eyes is Back,” a show about Frank Sinatra’s life and songs. Other shows included “Summertime” and “Pass the Popcorn,” with favorite songs from movies. Bronwyn Shook, from upstate New York was the accompanist. Hors d’oeuvres, including cracked crab claws, clams casino, and oysters Rockefeller, were served.

After two years Ron was again ready for a change. Local islander, Kenny Ballance, leased the Pub in January, 1983, and managed the business until 1985.

At the same time Ron leased the Pelican Restaurant, located at 305 Irving Garrish Highway, for one year. The Pelican, established in 1981 by John Ivey and Debbie Wells, was the island’s first “gourmet” restaurant. In 1983 John and Debbie canceled their lease, and purchased property across the road from Blackbeard’s Lodge. In February, 1984, they opened the Back Porch Restaurant, which soon became one of the most highly acclaimed eateries on the Outer Banks.

Meanwhile, in 1979 or 1980, Tom Bell, Ocracoke captain of the charter sailboat “Judge Not,” and his partner, Karl Harr, former security advisor to President Eisenhower, purchased two lots on the northeast side of Irvin Garrish Highway. In 1984, with help from island carpenter Jerry Burham, Tom built a new establishment (where Howard’s Pub is located today). Immediately, Ron Howard leased that building and opened Castaways, another bar and eatery. Castaways was short-lived, however, closing in early August after a lackluster season and a raucous party that  left most of the staff too hung over to return to work.

The following summer, in 1985, Tom Bell and Karl Harr opened Pancho’s Deck in their building. Harr’s daughter, Amy was the manager. Again, lack of business forced Pancho’s Deck to close several weeks after Labor Day. The building stood empty the next year.

Across the street, Howard’s Pub was also struggling, and soon closed. Maria and Jerry Garey, who had operated an eatery at the gas station and on the Back Road opened Maria’s Restaurant there in 1986.

The next year Ron Howard leased Bell and Harr’s building again, and re-established Howard’s Pub on that side of the highway. In 1989 Howard purchased the property, and continued to manage the growing business for two more years. In 1991 Ron sold his business and property to George (Buffy) and Ann Warner. The new owners considered changing the business name, but decided to keep it. Under their management Howard’s Pub and Raw Bar Restaurant continued to flourish, becoming one of the best known and most popular eateries on the Outer Banks. Howard’s Pub became famous for its eclectic atmosphere, popular menu, large selection of lagers and ales, and for staying open 365 ¼ days of the year. 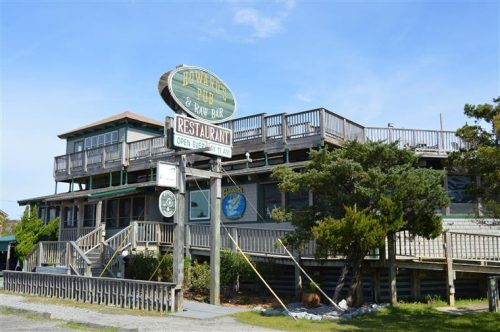 In 1992, Maria’s Restaurant closed, and Ron Howard opened the Pamlico Restaurant and Pamlico Tavern in his original building. Open 6 pm until midnight daily, the Tavern offered food and drink specials, and free pizza after 10 pm. The Pamlico Restaurant and Tavern closed after one season. Over the next two and a half decades a series of different restaurants managed by various entrepreneurs, occupied the building, including Mango Loco, Saucy Shrimp, Sargasso, Riley’s, Cockle Creek, and Gaffer’s. For a short while Ron’s brother, Richie, operated a t-shirt and gift shop (The Tourist Trap) in the building.

Tragedy struck on June 11, 2004, when Buffy Warner, co-owner of Howard’s Pub, fell down the companionway on his motor yacht and died. His funeral was attended by more mourners than anyone in recent memory.

Before moving to Ocracoke, Buffy had attended West Virginia University in Morgantown, WV, where he received a degree in Labor Relations and a Masters Degree in Journalism. He served in the West Virginia State Senate from 1987 to 1991, where he earned a reputation as a colorful and dedicated public servant. He was a passionate and unwavering supporter of the Ocracoke community and its livelihood, and was active in community politics and civic organizations.

As of this writing, Ann Warner continues as owner of Howard’s Pub. Although the Pub now closes for several months in the winter, it continues to be a popular destination for locals and visitors seeking a relaxed dining experience, excellent food, and a large selection of beer, wine, and mixed drinks.