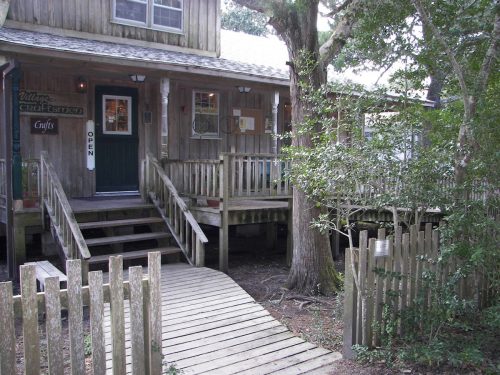 Lawton Howard was born on Ocracoke Island October 10, 1911. When he was a teenager he moved north, like so many other young island men, to work with the US Army Corps of Engineers on dredges and tugboats on the Delaware River. Lawton married in Philadelphia, and he and his wife Connie raised their two sons up north.  But every summer they spent their vacation on the island. Lawton always vowed to move “back home” to Ocracoke after retirement. In 1966 Lawton and his wife Connie returned permanently to live in the modest home they had built in 1954 on Howard Street. Their sons Lawton, Jr. and Philip visited often.

After graduating from Gettysburg College, Philip enrolled in Lutheran Theological Seminary, Gettysburg, Pennsylvania. In 1968, as part of his training, he moved to north central Montana with his wife, Julie, and one-year-old son, Stefen Olaf. There he served as student intern at Our Savior’s Lutheran Mission on Rocky Boy’s Indian Reservation, home to a small band of Chippewa and Cree Indians. On the reservation he met and befriended many tribal members including Yellow Bird, an accomplished translator; Four Souls, son of recently deceased Chief Little Bear; and Raining Bird, the tribal medicine man.

Fascinated by Native American culture and traditions, Philip and Julie embarked on a project to construct a traditional 18’ Cree tipi, complete with lodgepole pine poles harvested from the Bear Paw Mountains on the reservation. The tipi served as a camping tent, and they pitched it with others at the annual Rocky Boy’s Sun Dance.

By spring, 1969, it was time to leave the reservation. Philip and Julie and their son packed up their belongings and moved to Maryland. Back east, having decided to leave the seminary, Philip secured a position at Sandy Spring Friends School in Maryland, teaching English and Math. Julie served as girls’ dormitory house mother. The tipi continued to be used for occasional camping trips, especially during the summer months when school was not in session. In August of 1970 the Howard family brought their tipi to Ocracoke Island when they visited Philip’s parents.

Recognizing the growing tourist industry on Ocracoke Island, Philip and Julie decided to set up their tipi in Lawton and Connie’s side yard, and used it to display and sell some of Philip’s original pen and ink sketches of island scenes, as well as a small assortment of other craft items, including Julie’s beadwork inspired by her time on the reservation.

The Tipi Shop (sometimes spelled Teepee Shop), as the fledgling business was unimaginatively named, operated for three weeks in the summer of 1970. Sales were modest, but encouraging. Total income for the third week amounted to almost $100, a tidy sum for 1970.  That was enough to convince Philip and Julie to return the next two summers for a full three months, and with an expanded inventory. In May, 1972, the Howard’s second child, Amy Janette, was born. She accompanied her parents and brother to Ocracoke that summer, as the family became permanent island residents.

By 1971 the Tipi Shop was selling woven sashes, leather belts, macramé chokers, spoon rings, tin ware, hand-made toys and games, and an assortment of sterling silver jewelry. In that summer a small parcel of land adjacent to Lawton and Connie’s lot on Howard Street, which had been the site of Philip’s great-aunt’s garden, was offered for sale. The Howards scraped together the $2,000 purchase price by cashing in a life insurance policy, and bought the land. At the end of the 1971-1972 school year they resigned their positions in Maryland, and spent the early fall clearing their newly-acquired property. Philip, who had learned the carpentry trade in summer jobs, and with much help from his parents, spent the winter months constructing the building that would become an iconic presence on historic Howard Street. It was just a basic 28’ X 32’ frame building with plywood siding, a shed dormer, and a small landing with wooden steps. The interior front half of the downstairs was sided in 1” X 6” rustic pine boards to serve as retail space. The back half and upstairs, though not finished, became living quarters, as well as storage area and workshop.

Although the tipi was set up in the side yard one last summer, in 1973 the business name was changed to Village Craftsmen in order to better describe the Howards’ commitment to offering only quality US-made handcrafts, including Philip’s artwork.

In 1974 Philip’s father, Lawton, an accomplished woodworker, began making handsome replicas of a caned platform rocker that Capt. James Howard, Philip’s great-grandfather and keeper of the US Life-Saving Station, had salvaged from a wrecked ship in 1899. Two dozen chairs, all signed and numbered, were sold for $250 each.

Every year saw the addition of more quality American-made handcrafts, including duck carvings by local artists, weavings, wood turnings, jewelry, and a growing selection of regional and North Carolina pottery. Wooden folk toys, especially “limber jacks,” as well as spoon rings fashioned by Philip, remained popular items throughout the 1970s and 1980s. For a few years in the late 1970s the Howards also traded in antiques. Eventually, the Village Craftsmen remained open 9 to 10 months of the year, from Easter through Christmas.

A near tragedy occurred in July, 1978, when the building was struck by lightning during a violent thunderstorm. Several fires broke out in the attic. They were quickly extinguished, but not before causing considerable smoke damage. Another lightning strike occurred a few years later, causing no damage, but prompting the Howards to install lightning rods on the building.

By 1980 vertical board & batten cypress siding added a finishing touch to the exterior of the building. During the same period much of the rest of the interior was completed. In 1986, with the help of Stefen and National Park Ranger Jay Robinson, Philip and Lawton added another two rooms to the northwest side of the building, along with a full front porch and handicap ramp. The dividing wall downstairs was removed, allowing conversion of the living quarters to retail space. In 1986 -1987 Stefen operated a small bookstore in the new section.

By this time Village Craftsmen was well established as one of the premier craft galleries on the Outer Banks. In 1990, in response to requests about shipping items to customers who were unable to visit the island in person, Village Craftsmen printed a small catalog that featured plant rooters, pottery oil lamps, cutting boards, woven purses, and mugs. The following years’ mail order catalogs were more sophisticated, and offered a selection of handmade wooden boxes, musical instruments, kitchen items, and wooden folk toys.

In 1994 Philip, now the sole owner of Village Craftsmen, purchased a small strip of an adjoining property that included a sizeable outbuilding which served as a much-needed storage area. The outbuilding was then attached to the existing building with a corridor that included ample space for a new office and a workroom. Philip’s cousin, Dallie Howard Turner, who joined the Village Craftsmen in 1990, and Jude Brown, who began working there in 1993, made up the core of the staff, while various college students and other summer employees, including Philip and Julie’s now adult son and daughter, shared their energy and creativity.

Village Craftsmen published their last print catalog in 2000, with 16 pages of pottery, jewelry, kitchen items, carvings, baskets, musical instruments, watches, and handmade soaps. In 2001 a web site, complete with an on-line store featuring a much larger assortment of items, replaced the printed catalog.

Business continued to improve as Village Craftsmen regularly added additional quality American handcrafts to their inventory. In spite of some pressure to expand to a larger building, or even to establish a second gallery, Philip decided to concentrate his energy on Village Craftsmen’s site on picturesque and historic Howard Street.  Nevertheless, in 2005, after 35 years of personally operating the gallery, Philip made the decision to hire Jude Brown as manager. Philip remained owner and advisor, but stepped away from daily involvement at the gallery. Under Jude’s dedicated oversight Village Craftsmen continued to thrive.

When Jude retired at the end of 2016 Philip’s daughter Amy assumed the role of manager. She maintained the commitment to quality American handcrafts and friendly service, and immediately infused the business with her unique enthusiasm and creative energy. When the gallery opened for the 48th season in March, 2017, customers were greeted with a more open and expansive display area stocked with an even larger selection of pottery, glassware, wooden items, and other fine crafts.

Amy, who had earlier served as administrator of the Ocracoke Preservation Society Museum brought with her a broad knowledge of Ocracoke Island history, culture, and traditions. Philip, who had continued to publish his daily Ocracoke Journal and monthly Ocracoke Newsletter, began spending more time at the counter, greeting customers, working the cash register, and answering questions about island history. Other family and friends work or volunteer at the gallery, offering a friendly welcome to everyone who visits Village Craftsmen.

In the fall of 2017 Amy’s brother Stefen, and Amy’s husband David, worked together to create a more streamlined website that included an up-to-date on-line catalog and links to Philip’s daily Ocracoke Journal and monthly Ocracoke Newsletter.

Amy, David, Philip, Stefen, and the entire staff of Village Craftsmen invite you to visit them at their gallery on Howard Street. A special treat often awaits you on Friday afternoons, when Amy’s husband, Fiddler Dave, brings homemade fig cake to share with customers.