Migratory wildfowl, ducks, geese and brant will be more plentiful along the coast of North Carolina this year [1938] than in several seasons. Already the professional guides who will serve the gunning sportsmen who will be coming down for the waterfowl shooting are making preparations to take care of their parties. 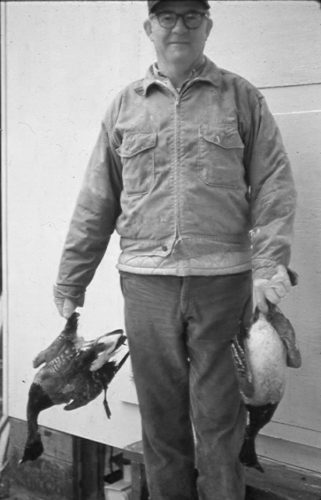 If you are cruising on Pamlico or many of the other coastal sounds and bays at this season and see what you think is a new beacon in the distance, the chances are that the “beacon” will turn out to be a recently constructed blind, erected by some guide who is expecting parties down for the gunning with the opening of the season on November 15.

If you stroll around any one of several communities along the coast, Davis, Atlantic, Ocracoke, Portsmouth, Hatteras, Manteo or others, as the migratory wildfowl open season approaches, you will note many of the residents at work in small outhouses getting their decoys ready for use. You will see some of them making new decoys, because now that it is unlawful to use live geese, brant or ducks for the purpose of attracting their wild cousins within gun range it takes more wooden decoys to attract game near a blind or stand. [The use of live decoys was forbidden in 1935.]

But back to the first sentence and why wildfowl will be more plentiful this year.

In 1930 for some unknown reason to which no satisfactory explanation has been made eel grass disappeared from the sound and bay bottoms of North Carolina’s coast and as for that matter the entire coast from way down south to New Brunswick.

With the disappearance of eel grass there was noted an almost immediate shortage of game along the coast. On Ocracoke Island during the winter and spring of 1930-31 wildfowl in large numbers literally starved to death. It was nothing unusual to ride or walk along the beaches of the island and sight not just a few but hundreds of geese and brant so weakened (apparently from food shortage) that they could not fly. It was an easy matter to catch them, and many were caught to be fed awhile by their captors and then released.

The Biological Survey experts were not quick to realize the seriousness of this famine among wildfowl, but when they did, the three months open season was reduced to 30 days and for the past two or three years during which time the season has been shortened wildfowl gunning, once an important wintertime method for hundreds of guides to gain a livelihood, dropped to almost nothing. It is true that the duck shooting in the vicinity of Davis and Atlantic continued fair, and it was usually easy when weather conditions were right to get your bag limit of geese and ducks at Mattamuskeet, Hatteras and Ocracoke, but often the game would be so poor and “green” that it would be unfit to eat.

But this year it is a different story. Eel grass has returned in larger quantities than since 1928 or 1929. The 1938-39 Federal wildfowl season has been lengthened. This year it will be a 45-day season opening November 15. Persons who once made an excellent livelihood during the winter time serving as guides are looking forward to new business this winter. They are building blinds and getting their wooden decoys in shape. Many are at work as this story is written on the construction of new decoys. Decoy making is an art but the old-time guides stick to their homemade type instead of those which are offered for sale by the mail order houses and sporting goods stores. 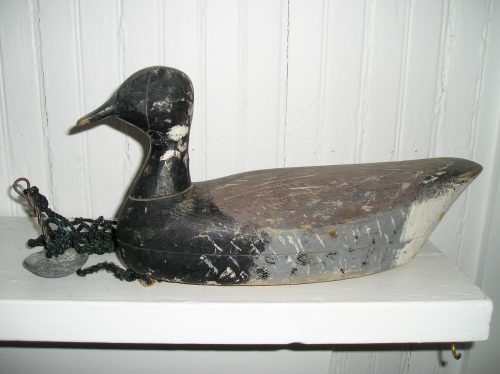 Captain Gary Bragg [1881-1954] of Ocracoke Island is one of the old timers who still prefers to shoot game or have parties which he is guiding shoot game over decoys he has made. In his decoy house near his Cedar Grove Inn on Ocracoke Island, are stands of geese, duck and brant decoys numbering several hundreds. In a pound near by are his live decoys which have been penned by the time this story appears in print. They are penned because during the gunning season a domesticated decoy’s life is in danger if permitted to roam around the shores. But Federal regulations will not permit the shooting of game over live decoys. As a result, there are hundreds of Canada wild geese decoys (alive) unemployed in each community of the coast and outer coast.

Captain Bragg was born on Ocracoke Island, over 65 years ago. Since he was 15, except for the time during his youth he might have served before the mast on coastwise vessels or was in the West Indian trade, he has pent winters on Ocracoke. And winters on Ocracoke means wildfowl shooting.

Years ago, few sportsmen came to the coast for the wildfowl gunning, because game was plentiful on every bay and sound of the country. During these days, Captain Bragg, like many other residents of Ocracoke and outer banks communities, went market hunting [see https://en.wikipedia.org/wiki/Market_hunters] during the winter months. In those days, from a market standpoint, the demand for Red Head ducks was far greater than the demand for Canada geese, brant or other species of wild duck. If market hunting had not been curbed, many species of migratory wildfowl today would be extinct. Today it is just too bad for anyone to try and sell any kind of wildfowl on the market – if arrested on the charge the offender pays aq heavy penalty.

After the market hunting was stopped, many of the professional gunners became professional guides. Captain Bragg is one of the old-time market hunters who has changed to a modern day guide. Although he has tried shooting over the factory-made decoys brought to the island by some of his parties, he still prefers those which he has mad himself and as a decoy maker he is an expert.

The proper kind of wood is an important factor when a person starts to make a decoy. Captain Bragg and 90 per cent of the decoy makers along the coast today use juniper or cypress because both of these woods when thoroughly seasoned are easy to carve and almost as light as cork. 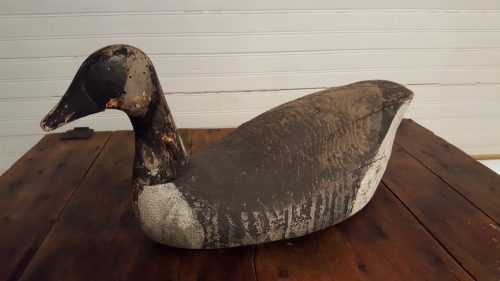 In many of the Outer Banks communities, the decoy makers see abandoned telephone poles of the Coast Guard lines. Through the years, these poles have become thoroughly seasoned and are easy to shape into bodies of a decoy. Only a few tools are used in making a decoy. For instance, Captain Bragg in the accompanying photo is shown making a Canada goose decoy. The tools he uses includes a handsaw, a hatchet, a drawing knife of regulation size and a smaller one for use on the heads, and his pocket knife. After he has located an old telephone pole, his first move is to saw off a chunk from which he can carve a body of approximately the same size as a live goose.

Taking this chunk measuring about two feet in length between his knees and resting one end on a solid block lying on the ground he is ready to start the preliminary work of shaping the body with an ordinary hatchet. After the chunk begins to take shape he uses his drawing knife to add the proper curves to the breast and rump and the base of the neck. By the time the body has taken shape he has probably worked a couple of hours depending, of course, on how easy the wood cuts.

Gary Bragg Working on a Decoy: 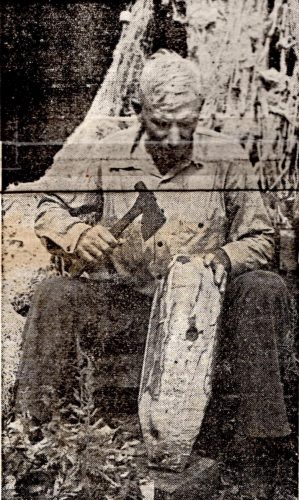 Next an important phase of making a decoy comes – the carving of the head. The head and neck will be made of solid hardwood. Quite frequently the head is made from a forked red cedar limb, which not only has the crude shape of a goose or waterfowl’s head, but is also substantial and will not break. If you have ever visited the outhouses and work shops in communities along the outer banks and wondered what would be done with those forked cedar limbs, you can stop wondering now. They were destined to become the carved head of a wooden decoy. In shaping the head Captain Bragg uses his small drawing knife and his pocket knife. If he works fast his head will be pretty well shaped up within an hour.

Next move is to fit the head on the body. This is a very important part of the job. Long finishing nails are used, and even they are usually good for but one season due to rust and the heads have to be renailed the following year before painting time. With the head and neck attached solidly to the body you have your decoy in shape to be painted. Painting a Canada goose decoy is an easy job, but the have got to know exactly where to put your black and white paints which are used. The lower part of the rump and the throat of the head are painted white. The remainder of the body is painted solid black. It is true that this is not the exact color of the wild goose you will kill, but if you can tell a wooden decoy bouncing on the water 100 or even 50 yards away from a live, wild goose, you are an expert. Especially if it is a windy day, and you who have hunted wildfowl know that unless it is a windy day you might as well stay at home, or go fishing.

Last move in the making of a decoy is attaching the anchor. Usually on the belly side of the decoy are nailed strips of lead or metal to serve as ballast and deep the decoy upright while it floats on the water. But to prevent the decoy from floating away it is necessary to anchor it. Many guides use heavy pieces of iron which they have found along the beach on old ship-wrecks as anchors, but the majority of today cast their own mushroom type anchors from lead they have accumulated or send to foundries on the mainland to have them made. The anchor is attached to the decoy with a heavy cord, which will not  break the first season it is used, but if not changed by the following year is liable to break quickly after it has been placed near a blind where the tides are running strong or the wind is blowing a good clip.

Gary Bragg with a Stand of Decoys: 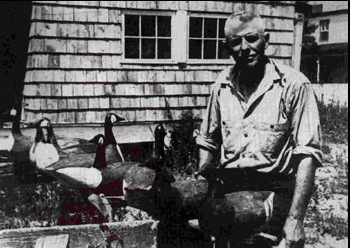 Captain Bragg along with other professional guides are glad that the season opens November 15  this year, two weeks earlier than last season. They are glad that the bag limit on ducks of most species will be 10 daily, that three re-heads, canvasbacks and buffleheads may be killed each day this season. Last year they were protected. They are glad that the hunter can kill five geese each day, but sorry that there will be no open season on brant. Especially is the latter true in the Ocracoke region where Captain Bragg lives, because waters within a radius of 20 miles of Ocracoke is the sole winter feeding grounds of brant, the fast flying waterfowl which in size is  halfway between a duck and a goose – and by far the favorite feast of the islanders and sportsmen who have had an opportunity to eat them.

A history of live decoys:  http://edecoy.org/livedecoy.html