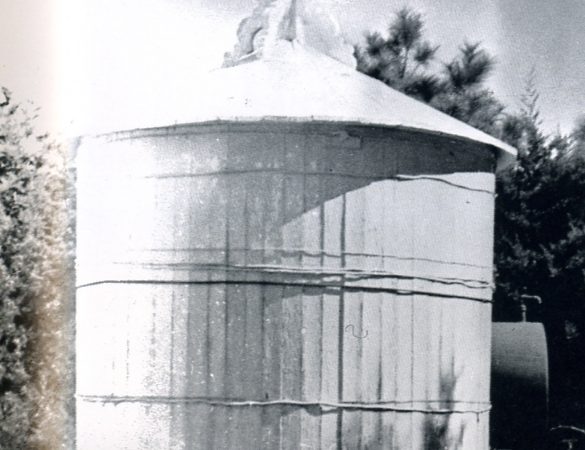 Prior to June of 1977 everyone living on Ocracoke Island relied on rainstorms and runoff from the roof for fresh drinking water.

According to oral tradition the first water storage containers were simply wooden barrels, undoubtedly gathered from sailing vessels or local stores after they had emptied them of vinegar, rum, or molasses, popular fare brought to the island from the Caribbean and other faraway places.

Rainwater, a scarce commodity especially during dry spells, was used only for drinking and cooking.

In times of prolonged drought islanders shared as they were able. Young children would be sent to a relative’s house (perhaps a single aunt or uncle with a large cistern) once a day carrying a bucket or pot. Those two or three gallons of drinking water would have to last a family the entire day.

Ground water, which typically was the color of tea, and had an odor, was used for all other endeavors, including washing and bathing, and to water gardens and animals. Ground water was available by simply digging primitive wells. Just a few feet below the surface lies an island-wide fresh water lens that is relatively easy to access. The color and odor mostly come from tree roots. Sometimes barrels would be stacked two high in the well to keep the sides from caving in. Alternatively, wooden planks would occasionally be used to line the well. Water was simply retrieved by tying a rope to a bucket and lowering it into the shallow well.

An Old Well Uncovered on Hatteras Island after the 1944 Hurricane: 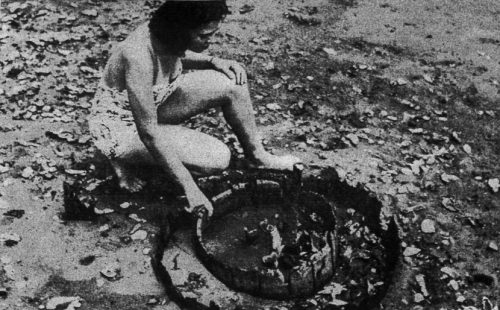 One of the oldest maps of Ocracoke shows a well on Ocracoke Island. Presumably pirates and early settlers made use of this and other wells. (Note location of well immediately above “Ocacock” on map.)

Inset in “A New and Correct Map of the Province of North Carolina” by Edward Moseley, 1733: 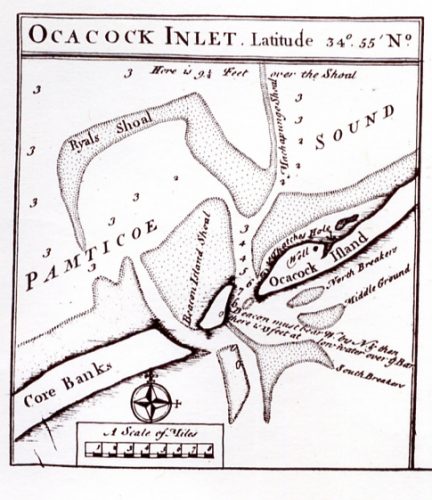 To this day a low, round brick well, probably constructed in the nineteenth century, still stands at Springer’s Point as a reminder of a bygone era. 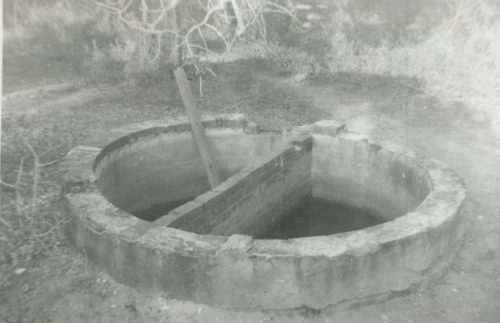 In later years “well points” were driven about 8 or 10 feet into the sand, and attached to a “pitcher pump.”  As mentioned above, ground water was used to water the garden and to provide water for animals, as well as for bathing. 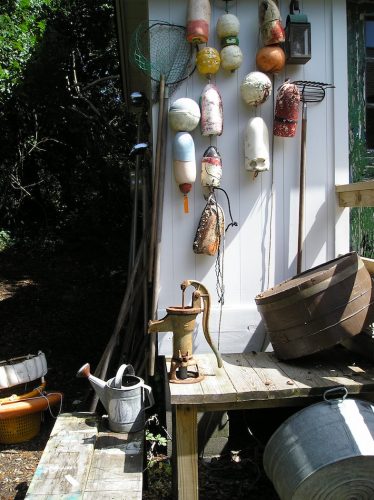 During the later colonial period, and into the early twentieth century, more substantial wooden water troughs were used to store rainwater. Typically 12′-15′ long, 4′-5′ wide, and  2′-3′ deep, they were constructed of wide, thick planks of rough cut cypress or juniper. The seams were caulked with tar to prevent leakage.

Eventually large round wooden cisterns held together by iron bands replaced barrels and troughs. Some had flat wooden tops; others had more elaborate conical roofs…but the vertical planks were cut much like barrel staves. Oral tradition suggests that many of these cisterns were purchased from mail order houses as kits, and assembled in place. 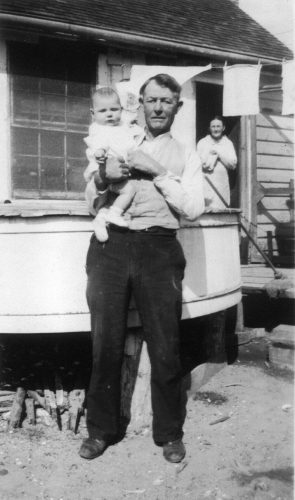 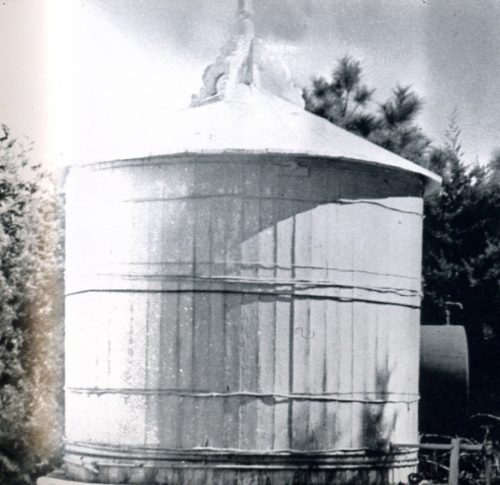 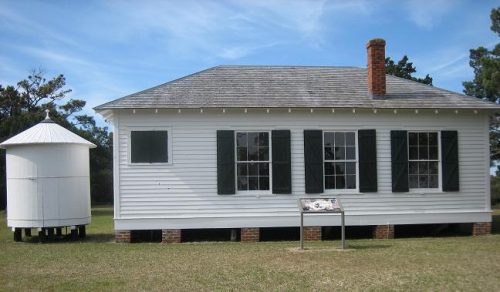 Still later, several varieties of brick cisterns became popular. James (Mr. Jim) Garrish and Thad Gaskins are remembered for building brick cisterns around the village. Some were plastered with cement; others were simply painted (typically white, or to match the color of the house trim).  Many brick cisterns were round with flat, wooden tops. Others had domed tops. A few were built like cubes. 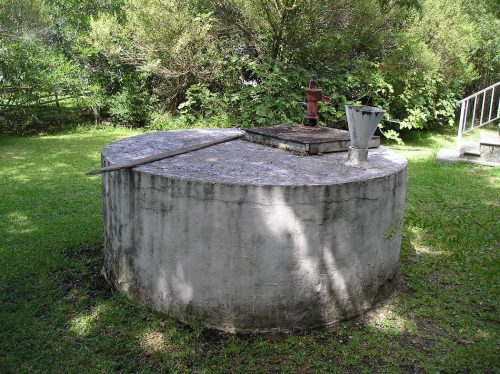 Large Cistern that Supplied the Navy Base in WWII: 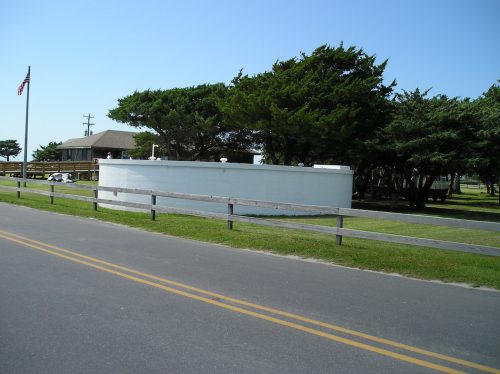 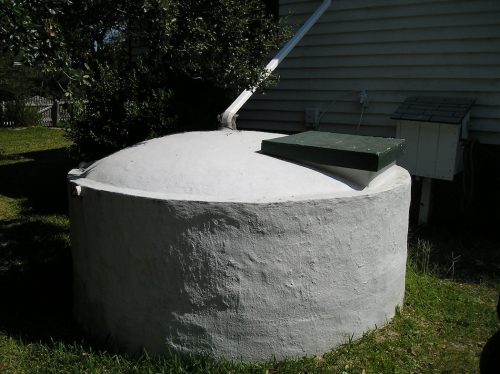 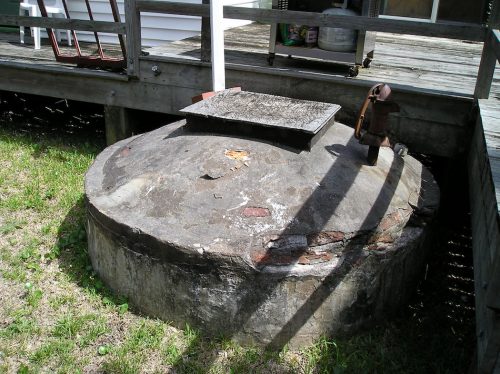 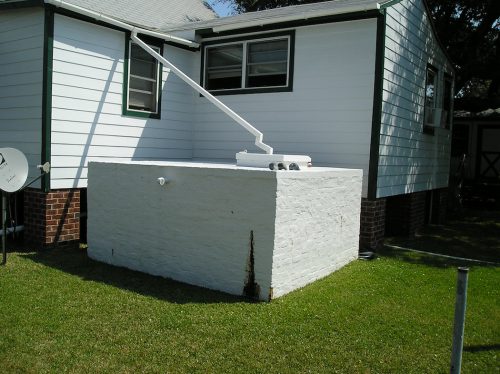 Still other cisterns were rectangular with vaulted tops. At least one, now long gone, was shaped like a squatty soda bottle.

Domed and vaulted tops were constructed by first laying planking across the open top, then piling sand upon the planking, and molding it to the desired shape. After the bricks were laid on top of the sand, and had dried sufficiently, the planking and sand were removed from below by crawling through a man-sized hatch into the cistern. The hatch was later used to lower buckets into the water, and as access when the cistern needed to be cleaned (usually once a year, in the spring). 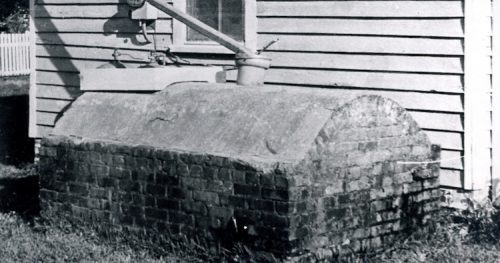 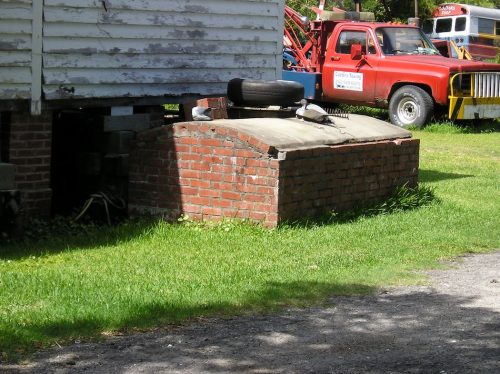 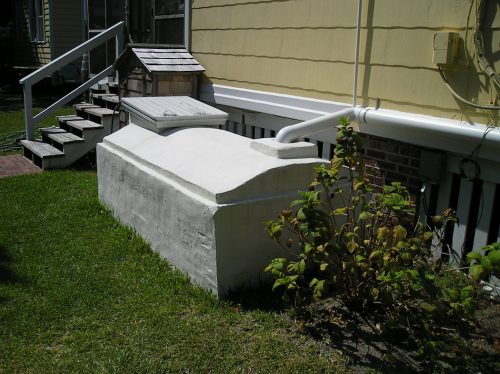 To prevent leaves, bugs, and other debris from entering the cisten most islanders covered the inlet hole with screen wire. But nothing could prevent mosquitoes from laying eggs in the drinking water. Tapping on the sides of a bucket of water would cause most of the larvae (“wigglers” to islanders) to settle to the bottom. Pouring water through cheese cloth was a more reliable method of eliminating the larvae (at least the majority of them).

Many of the cisterns had a pitcher pump installed on top of the structure, as well as one in the kitchen. It was not uncommon to leave a tin cup, ladle (sometimes made from half of a coconut shell [they freqently washed up on the beach] attached to a wooden handle), or a large conch shell nearby as a dipper. Ocracokers always referred to a conch with the opening on the left side as a “right handed” conch (shell books call these “left handed” conchs) because they could be easily grasped by the right hand for this purpose.

By the 1950s large rectangular cisterns were being constructed of concrete blocks, with reinforced concrete tops. 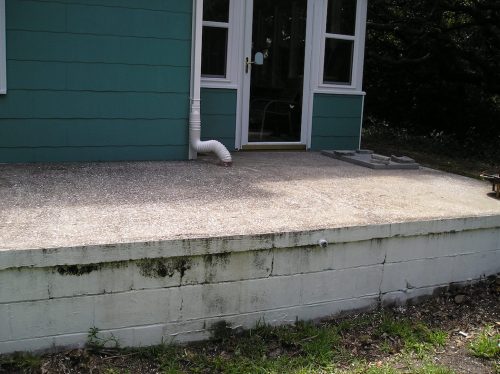 It was immediatly apparent that these cisterns would serve well as porches, especially if they were built against the house and outfitted with posts and a roof.  For more than twenty years this was the most popular type of cistern. 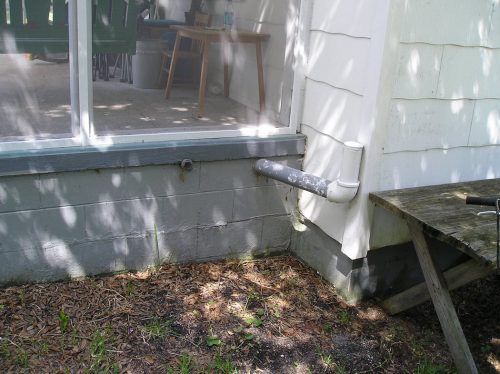 Finally, in 1977, Ocracoke got a municipal water system. Nearly everyone who was eligible signed up, and cistern water was reserved for watering gardens and washing cars. However, because water mains were not extended to all outlying areas new construction there still relied on cisterns. By the last quarter of the twentieth century fiberglass tanks had replaced concrete cisterns. 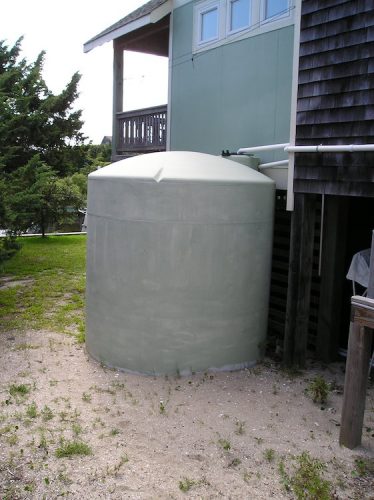 Ocracoke’s water plant draws from three deep wells (620 – 640 feet deep) that tap into the Castle Hayne aquifer. At this writing the village has more than 1100 meters. The plant can produce more than 500,000 gallons of potable water daily, and can store 400,000 gallons in ground tanks, and 150,000 gallons in the elevated tank. 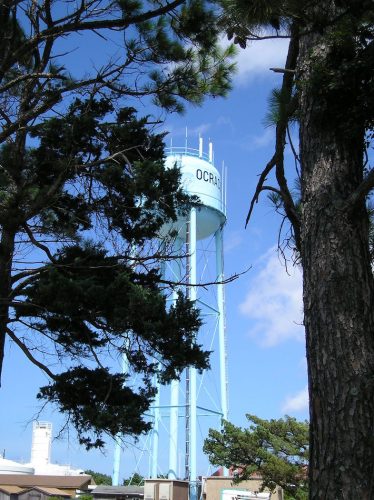 In 2010 the Ocracoke Sanitary District, the administrator of the sophisticated reverse osmosis municipal system, announced plans to upgrade and expand the facility.