Several years ago, on a busy summer day, a customer stepped up to the counter at Village Craftsmen with an unusual question. “Can you tell me the significance of the coins on the tombstones across the lane?” the customer asked.

As most of our readers are aware, Village Craftsmen is located on historic Howard Street, a one-lane, unpaved road on Ocracoke Island. A number of family cemeteries lie beside the lane, and some of the graves date to the early 1800s. Visitors to the island often walk through the cemeteries to read the epitaphs in order to glean a bit of island history.

I had no idea what he was referring to. “What coins?” I said.

The customer proceeded to explain that some of the tombstones had pennies, nickels, dimes and/or quarters placed on them.  I walked across Howard Street to investigate. My parents, grandparents, great-grandparents, and great-great grandparents, as well as other more distant relatives, are buried there, but it had been several weeks since I had visited the cemeteries. Sure enough, several markers had a few coins resting on them. I told the customer that I didn’t know the answer to his question, but I assured him that placing coins on tombstones was not a traditional local custom.

Over the next several years I noticed more and more coins laid on local tombstones and monuments. One visit to the British Cemetery revealed many dollars-worth of coins (and even a few one- and five-dollar bills) placed on the markers. A neighbor and I gathered the money in a basket (it totaled more than $200) and passed it on to a representative of the annual British Cemetery Memorial committee.

For millennia, humans have decorated graves with flowers, shells, stones, feathers, candles, and other items. In some cultures, coins, bowls of food, bottles of alcohol, cigarettes and other gifts are placed on graves, or even inside caskets as ways to honor the dead, to bring good luck to the deceased, or to ease the departed into the afterlife.

The modern practice of leaving coins on tombstones apparently has its origin with the military. According to posts shared on social media, different coins convey different messages.

There is speculation that the ritual of placing coins on gravestones dates back to Benjamin Franklin (d. 1790) who famously said, “a penny saved, is a penny earned.” According to the Christ Church Preservation Trust in Philadelphia, tens of thousands of coins are thrown onto Benjamin Franklin’s marker each year. The practice has been blamed for causing a significant crack on his marble ledger tablet.

Of course, there is no official protocol for leaving coins on tombstones, and the practice has clearly extended beyond honoring just military members. In recent years family members in some locations have begun honoring their loved ones by placing coins on graves. For many years Ocracoke islanders have decorated graves with flowers and shells, but, as mentioned, placing coins on tombstones is not a time-honored Ocracoke Island tradition.  As this custom grows, surely different people will have different understandings of the symbolism.

Most of the people buried on Howard Street did not serve in the military. Even those who did (including members of the US Life Saving Service and US Coast Guard) may not have military markers. And most, if not all, of the coins seem to have been left by island visitors, not by local family members. Perhaps visitors to Ocracoke simply wish to honor the many generations of sturdy islanders who have lived on this beautiful barrier island and endured storms, hurricanes, shipwrecks, and isolation from the mainland.

As mentioned, the coins left at the British Cemetery are periodically collected and used to fund the annual memorial ceremony. Coins on Howard Street family cemeteries are used to help clean and maintain the graves. 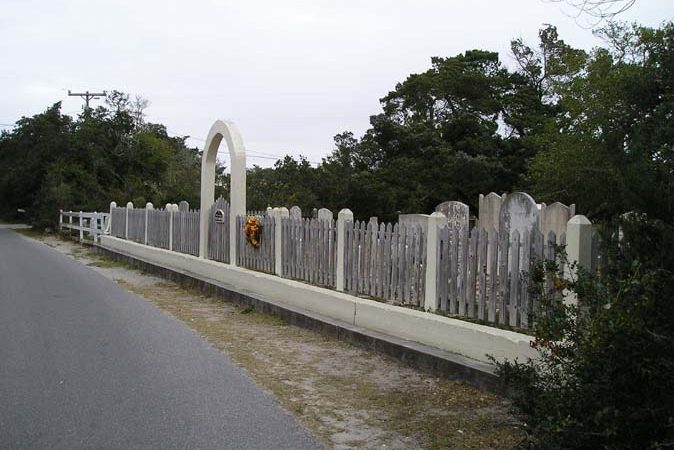 As many of our readers know, it is impossible to stroll through Ocracoke village for very long without encountering a cemetery. More than eighty family graveyards are scattered throughout the village, many tucked away on low ridges or hills in side yards and along footpaths between historic home sites. Some are overgrown with briers and vines. Others are well tended. A half dozen old cemeteries line the British Cemetery Road, and quite a few small enclosures on Howard Street protect the graves of several branches of the Howard family. Scions of old island families lie in peace behind the lighthouse, near the NPS Visitors Center, hidden away at Springer’s Point, and elsewhere along historic lanes. No one knows for sure how many unmarked graves lie in side yards, on small tussocks, near the sound shore, or even under the gentle waves of Pamlico Sound. Ancient wooden markers have rotted away, storms have scattered most of them, and erosion has left many graves under water. Add to that the dozens, almost certainly hundreds, of sailors and castaways whose bodies washed upon our beaches, and who were buried in the dunes. And who could forget the pirates and buccaneers who frequented Ocracoke in the early eighteenth century? Blackbeard, and many of his crew, as well as British sailors who fought to put an end to his depredations, may well be buried on the shore near where they fell and died.  No doubt at least a few of the island’s earliest visitors (members of the Native American Wocon tribe) are buried here and there within the village.

In 1973 Hyde History, Inc, published In Memory Of… An Index to Hyde County Cemeteries compiled by Martha Rebecca Swindell and Romulus Sanderson Spencer, Jr. Pages 277 – 328 list every island cemetery that was identified, along with a map (reproduced below), and detailed information about each grave (name, dates, epitaphs, and additional family information). 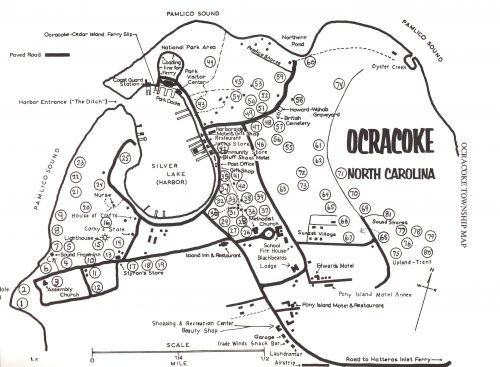 Our island cemeteries are a rich resource for local history, genealogy, and other family information. The inscriptions are sometimes just factual,  frequently inspirational, often sad, sometimes humorous, and once in a while downright confusing. Following is a small sampling of epitaphs (in no particular order) from many of our Ocracoke Island cemeteries.

She was as good as goodness is.
Her acts and all her words were kind.
And high above the memories
I hold the beauty of her mind.

Religion filled her soul with peace
Upon a dying bed
Let  faith look up, let striving cease
She lives with Christ our head. Tis hard to break the tender cord
When love has bound the heart,
Tis hard, so hard, to speak the words
We must forever part.

Gone, but not forgotten This little rose so young, so fair,
Called hence by yearly doom,
Just came to show how sweet a flower
In Paradise could bloom.

A Tender Mother and a Faithful Friend

When we see a precious blossom
that we tended with care,
Rudely taken from our bosom,
how our aching hearts despair. Tis hard to see our dear ones die,
To give up those we love
That shed a joy around our way.

She was,
But words are wanting to say what,
Think what a wife should be:
She was that.

Tis over, that deep sigh was the last,
The last of mortal grief and pain.
Death’s gloomy horror all is past
And finish’d all this mournful reign. Wife of George Howard, born 1724.
Died November 24,1841.
Aged 117 years
Lo! the prisoner is released.
Lightened of her fleshly load.
Where the weary are at rest
She is gathered unto God.

As for man his days are as grass,
As a flower of the field so he flourished.
For the wind passeth over it,
And it is gone,
and the place thereof shall know it no more.

Unveil thy bosom faithful tomb
Take this new treasure to thy trust.
And give these sacred relics room
To slumber in the silent dust.

To Love Someone More Dearly Every day,
To Help a Wondering Child to Find Its Way,
To Ponder o’er a Noble Thought
And Pray and Smile When Evening Falls.
That Was Her Task.

A tender mother and faithful friend

Sunset and morning star,
and one clear call for me,
and may there be no mourning of the bar
when I put out to sea.

You Ain’t Heard Nothing Yet!