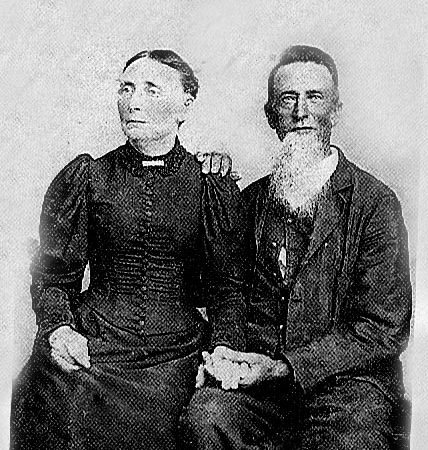 It was December of 1899.  The U.S. Life Saving Station at Cedar Hammock, just a mile or so from Hatteras Inlet, on the north end of Ocracoke Island, had been in operation for sixteen years.  The station had been built to provide rescue services for mariners involved in shipping disasters along the coast.  For three hundred years numerous shipwrecks had occurred around Cape Hatteras, and over that time many a sailor died because those on shore had no equipment or training to attempt a rescue.

In 1883 a dramatic change was made on Ocracoke.  James Howard was appointed the first keeper (or captain) of the new Cedar Hammock station.  Six surfmen, all natives of the island, were hired, and training began.  Over the next sixteen years a number of schooners and other sailing vessels wrecked on Ocracoke’s beach in stormy weather and high seas.  But most of the skippers and crew of those ships were delivered from watery graves because of the bravery and courage of the well-trained life savers. Not far from their fully equipped station, Keeper Howard and some of his crew had built modest homes.  Forsaking the comforts, conveniences, and community of Ocracoke village, the keeper and his surfmen brought wives, children, and other family members to their remote end of the island during their months of service (typically September to March, the period of severest weather). Keeper Howard and his wife, Zilphia, even had their grandchildren with them after their daughter, Lorena, died unexpectedly in her mid-30s.  Their father, Rev. L.O. Wyche, was a traveling Methodist preacher and was unable to take his children with him on his circuit.

As Christmas approached in 1899, the small isolated community at Cedar Hammock, including more than a dozen children, looked forward to the holiday season. Native cedars and yaupons were cut and used to decorate windows and doors.  Red bows were tied on wreaths and trees.  Christmas songs were played on the Howards’ parlor organ.  Stockings were hung by the fireplace in great anticipation of the coming holiday.  The surfmen and their families chose to pool their resources for a community-wide Christmas day celebration.  They would all gather in the station at mid-day on December 25 to share a festive dinner of roast goose, potatoes, collards, and pumpkin pie.   Each family would provide a portion of the meal.  James Hatton Wahab’s wife, Martha Ann Howard Wahab, accepted the responsibility of baking the pies.

On December 23, late in the afternoon, Hatton walked into the kitchen and discovered every level surface covered with pumpkin pies.  Martha Ann had baked, not just three or four pies for the two dozen or so people at Cedar Hammock.  She had baked enough pies for more than twice that many people.  “Whatever are you doing?” Hatton asked her.  “We can’t possibly eat all those pies, Martha Ann!”

“Well, Hatton,” she replied, “you know I always like to be prepared.  I want to be sure to have enough pies in case any folks from over seas come to join us for Christmas dinner.”

Hatton just shrugged his shoulders and walked back outside.  He had been scanning the skies.  Dark, ominous storm clouds had been rolling in over the sound, and the wind was picking up.  He had come home to check on his family.  After his five children were safe inside he would help at the station.  The other families had the same concerns.

Before long the children were all accounted for.  Some had been in the sound in their sail skiffs.  Two had ridden their ponies down the beach.  Others were in the yard, or in the house, playing games or singing along with the organ.  But now they were all safe inside.

The wind was stronger now.  The surfmen struggled to haul boats out of the water, put their horses in the stable, tie down equipment, and close the shutters.  The surf was rough and the tide was already beginning to rise.

Inside, the children were fed their dinners and put to bed around eight o’clock.  The adults huddled around their fireplaces, trying to stay warm, and worrying about what the storm might bring.  Cold wind was whistling through cracks in the walls, around rattling windows, and under the doors.  They might lose some shingles from the roof, or maybe a banging shutter would blow off.  But they were most concerned about the rising tide.  If it came too high they would be forced to open the doors (and maybe even the windows) to let the cold Atlantic water inside before it could lift their houses off of their foundations and float them away.

As the night wore on and midnight approached the worried families at Cedar Hammock were unaware of the drama playing out a few miles south in the Atlantic Ocean.

The steel hulled, schooner-rigged, British steamship, Ariosto, with a crew of thirty, loaded with wheat, cotton, lumber, and cottonseed meal, was making its way north, intending to refuel in Norfolk before departing for Hamburg, Germany.  Peering through the mist, rain, and clouds, on a pitching and rolling vessel, the Ariosto’s navigator spied a lighthouse.  At midnight he reported to his captain, R.R. Baines from Antwerp, that they were abreast of the Cape Hatteras light.  Captain Baines gave orders: “Steam straight ahead.”  And then he retired to his cabin.  It was a fatal mistake.

The ship was not well out to sea, east of the dreaded shoals of Cape Hatteras, as the officers believed.  The navigator had actually seen the Ocracoke light, and the Ariosto was headed straight for the north end of Ocracoke.

About two in the morning of December 24, 1899 Captain Baines was rudely awakened by a sudden thud, a fearful shuddering of his entire vessel,  a precipitous list to starboard, and the ringing of the ship’s bell.   Rushing to the deck, he leaned over the rails and saw nothing but wild, churning white water.   Thick, heavy weather enveloped the Ariosto, preventing visibility for more than a dozen yards.  He was convinced that they had run hard aground on the outer Diamond Shoals. Captain Baines ordered distress flares to be launched, but he had no hope that life savers from Hatteras could reach them in a storm such as this.

Fearing that his boat would break apart (already the starboard life boats had been carried away), Captain Baines ordered all men in the remaining life boats.  The first boat touched the roiling waves and was immediately capsized.  All eleven men were thrown into the frigid December waters.  Fifteen sailors climbed into the second boat when a wave struck it and it broke apart. All fell into the Atlantic.  The captain and three others who had remained on the vessel were now stranded.  Two sailors from the overturned life boat managed to grab hold of some tackle thrown over the side of the boat, and were pulled back onto the deck.

Painting of the Wreck of the Ariosto by Charlie Ahmen:

It was then that the crew from the Cedar Hammock station arrived on the scene.  Immediately keeper Howard raised the international signal, MK, “Remain on Your Ship!”  The Ariosto was several hundred yards off shore, only about two miles south of the station.  By now the ship was visible from shore, and the life savers were busy unloading their beach cart.  While designated surfmen set the crotch and buried the sand anchor others got the Lyle gun ready and released the line from the faking box.  As soon as possible Keeper Howard fired the first shot line to the stricken vessel.  It missed, but miraculously fell across a struggling sailor.  He wrapped the line around his arm before loosing consciousness.  The unconscious sailor was hauled up on the beach and given artificial respiration.  He revived.

Against all odds an exhausted sailor, seaman Elsing, managed to swim to shore.   Another struggling sailor was pulled out of the surf when the life savers made a human chain by clasping hands and wading into the numbingly cold, turbulent breakers.

Eventually a shot line reached the Ariosto and the hawser was attached to a mast.  The traveling block and breeches buoy were sent to the vessel.  By late in the afternoon the five sailors and the captain (carrying his pet dog “Belgium”) were brought safely ashore.   As Keeper Howard noted in his report, if all had remained on board all would have been saved.  As it was, twenty-one main drowned that Christmas Eve, 1899.

The survivors were carried back to the station, given dry clothes, warmed by the fire, and provided with food and hot coffee. The work of the life savers was not over, however.  Their equipment had to be gathered up and repacked in the beach cart, then taken back to the station where the ponies were cared for.

After that the drowned were carried from the incoming tide and buried in unmarked graves in the dunes near where they had washed up on the beach.  Rev. Wyche, who was spending the holidays with his children, was called on to provide Christian burials for the hapless sailors.

That night eight sailors from the Ariosto were berthed in the station.  Captain Baines spent the night with Keeper and Mrs. Howard. The next day, of course, was Christmas.  The nine survivors from the wreck of the Ariosto were included in the Cedar Hammock Christmas dinner celebration.

When it came time for dessert, all were impressed that there was plenty of pie for everyone, for Martha Ann was prepared, and had anticipated having “folks from overseas” join them for Christmas dinner.

The Ariosto never broke apart.  Several days later, after the storm subsided, the captain and crew asked the surfmen to row them out to their ship in order to retrieve a few personal belongings.  Captain Baines insisted on bringing his caned platform rocking chair with him.  Once on shore he presented it to Keeper Howard as a token of gratitude for saving his life.

Captain Baine’s chair has been passed down in the family, and sits today in my living room, a silent reminder of the disaster of Christmas Eve, 1899.  And of the courage, bravery, and skill of the men of the U.S. Life Saving Service.

As Christmas approaches each year I decorate my home with a native cedar tree adorned with mini-lights.  I cut yaupon branches, thick with red berries, and decorate my table.  I put candles in the windows, and hang a cedar wreath (with bright red bow) on my front door.

In the evenings I like to sit in my recliner, next to a dancing fire in my cast iron stove, and read.  Not infrequently I’ll nod off for ten or fifteen minutes.  I sometimes wake with a start, still somewhat drowsy, and glance towards Captain Baine’s chair. That’s when I’m sure I see the chair gently rocking back and forth.  I force myself awake, and when I look carefully the chair is still.   Nevertheless, I wonder, could it be that Captain Baines returns every year at Christmas?  Maybe he stops to visit my great-grandfather this time of year.  If so, I wonder what they chat about?

Perhaps he returns to reminisce about the wreck of his ship, and his rescue….and to wish us all a very Happy Christmas!