The World Submarine Invitational 1996, a human-powered submarine race pitting design teams from around the world, was held in San Diego, California, 3-12 April 1996.

Calvin’s vision, and his design, were unique. A 50-year-old creative tinkerer, Calvin was ready to build a human-powered submarine. And he wanted to promote safe sex at a time when Americans were still skittish about having that conversation. He had friends who had died of AIDS. “People’s lives depend on discussing condoms and using them,” he said.

So Calvin decided to incorporate condoms in the design of his submarine’s propulsion system. “I thought this was as good a way as any to bring condoms into table conversation,” he said. “People might laugh when they talk about it, but hopefully the conversation would turn more serious.”

In the fall of 1995 Calvin Wilkerson began construction of his submarine which he dubbed the Condomed Nautilus. Calvin had already been accepted to compete in the World Submarine Invitational. He had less than six months to complete his project.

The vessel was to be three feet wide, torpedo-shaped, with a round bow (reminiscent of the bulbous bows on sea-going vessels), and a “fish tail” stern, webbed like a “Chinese fingertrap.” One writer who saw the vessel described it “a big, blue sea slug.” The flexible tail was designed to allow the pilot to move the tail side-to-side with his feet in order to steer the vessel in much the same way as a fish navigates. No rudder was necessary.

Paint rollers were arranged inside the perimeter of the cylindrical submarine frame, and rotated by a pedaled bicycle mechanism. In the course of their rotation, the paint rollers pushed water through 42 condoms. The resulting propulsion mimicked the operation of the marine mollusk, the chambered nautilus. No pump or other mechanical advantage was employed. The idea was that the forward motion of the vessel would force water into the condoms which were then squeezed by the paint rollers, creating a “peristaltic” drive for the submarine. Calvin explained it as “1950s technology with a 1990s message.”

Calvin Wilkerson inside his Condomed Nautilus: 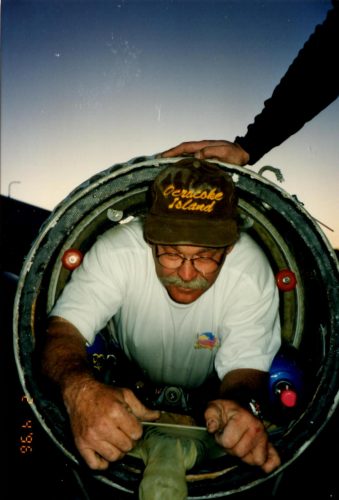 When completed, Calvin’s single-person vessel, built in his back yard for about $10,000, weighed 280 pounds, was 13 feet long, 3 feet wide, and constructed of Kevlar tubes. It was a free-flooding “wet” submarine powered by one pilot breathing with scuba gear, lying face down. Calvin was hoping his vessel would be capable of breaking the existing speed record (2.9 knots/hour) for a human-powered submarine without a propeller.

In December, 1995, Calvin called Tommy Burruss, a former Ocracoke resident and now a film maker in New York City, and asked him to use his professional connections to contact the Carter-Wallace Company (makers of Trojan condoms) and Durex (also makers of condoms) as possible sponsors for the submarine. Both companies refused. However, a southern California thrift store, Out of the Closet, donated free condoms for the project.

Fascinated with Calvin’s project, and eager to be a part of the team, Tommy moved back to Ocracoke in January, 1996. By springtime, Calvin and his volunteer crew were scrambling to complete their vessel in time to compete in the April race in California.

At the very last opportunity, Tommy and Calvin rented a van in Norfolk, Virginia, loaded the disassembled Condomed Nautilus inside, and drove to California. Forty hours later they were in Escondido. The submarine had never been submerged.

The submarine was tested for the first time, in a swimming pool in California. The condoms burst, validating the condom companies’ reluctance about sponsoring the project. Bicycle inner tubes were quickly substituted for condoms.

The following day the Condomed Nautilus was trucked to the Offshore Model Basin, Escondido, San Diego County, California, for entrance in the World Submarine Invitational ’96. The indoor freshwater model tow basin, the largest in the US, measures approximately 91 m (300 ft) long, 15 m (50 ft) wide and 4.5 m (15 ft) deep. Sponsors of the race wanted it to be staged in a controlled environment, encouraging the designers to challenge the medium, not the environment; and the clock, not each other.

Contestants were divided into three divisions with four categories in each division. The Condomed Nautilus competed in the Open Division, one-person, non-propeller.

Because of the unconventional construction of Calvin’s submarine, and the perception that there was little chance of its succeeding, the vessel was registered as the last entrant. When its time came, with Clark Eddy piloting and relying only on a “spare air” tank, the sub moved forward very slowly (at about ¼ knot per hour), proved unsteerable, and ran into the side of the pool, knocking off the round Plexiglas nose piece. The Condomed Nautilus never completed the race.

Calvin was undeterred, however, and continued to work on his vessel. The next year he attempted to enter his submarine in the International Submarine Races at the David Taylor Model Basin in Carderock, Maryland, hosted by the Naval Surface Warfare Center. His application was rejected. According to the ISR director, the policy of the host was that “…there can be no display of anything that can be considered illegal, offensive, in bad taste or in violation of Department of Defense or Department of the Navy policy. The Center reserves the exclusive right to determine what fits into this category.”

In spite of enthusiastic support for his project by such notables as Dr. Martin Gorosh, clinical professor of public health at Columbia University School of Public Health and the Center for Population and Family Health, and retired Navy Capt. Jim Stubstadt, one of the world’s leading authorities on human-powered underwater vehicles, the Condomed Nautilus never participated in another race.

Today, more than twenty years after that race in San Diego, Calvin Wilkerson’s quirky and unconventional Condomed Nautilus is still remembered fondly on Ocracoke Island, and still has the potential to help legitimize public talk about the use of condoms.

(Many thanks to Tommy Burruss and Cathy Scarborough for sharing their memories and photos of this historic endeavor!)

We can trace the idea of submersibles to Leonardo da Vinci’s 15th century conceptual drawings. But it was not until the mid-eighteenth century that the first submarine (a vessel capable of independent underwater operation and movement) was constructed. This was the single-person acorn-shaped military submarine, Turtle, invented by American David Bushnell in 1775.

The design and construction of submarines continued to improve. In 1864 the Confederate Navy built the H. L. Hunley, a human-powered military submarine, the first to sink an enemy vessel. By WWI, submarines were an essential component of the world’s major navies.

In 1989 Stann Dunn, at Florida Atlantic University, and Hap Perry, with the H. A. Perry Foundation, organized the first human-powered submarine competition. The following three races were held in 1991, 1993, and 1996. As of this writing at least thirteen races have been held. The next race will be in June, 2017. History and information about these races is available at http://internationalsubmarineraces.org/.