Like most small villages, towns, and neighborhoods with a sense of community, Ocracoke has many local traditions.  Island children, until recently, had their own traditions that were passed down from generation to generation.

Typically, Ocracoke children of days gone by had hand-made toys and played a variety of simple but fun, mostly outdoor, games.  Some, like “Annie Over the House,” “Red Rover,” and flying kites, were relatively common throughout the country.  Others, like, “Comesie, Comesie,” and “Mehonkey,” were local variations of more familiar games (“I Spy,” and “Hide & Seek).  Still others, for example “Lucky Strike, Lucky Strike,” and “King Stick,” appear to be unique to the island.

But some of the most intriguing island games and toys are fascinating because they are the remnants of old world or native American amusements.  “Cat” is one example.  This precursor to baseball was popular in colonial America and survived relatively unchanged on Ocracoke until the middle of the twentieth century.  (More about this & other island games in a future newsletter.)

Until about fifty years ago every island boy (and some girls) knew how to make a bird trap.  My father taught me how to make one and we in turn made a trap for my son, Stefen, when he was a small boy.  Unfortunately, times have changed and newer traditions have supplanted many of the older ones. 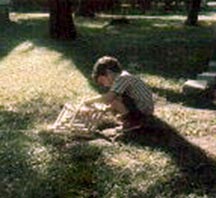 Today only a handful of islanders know how to make a traditional Ocracoke bird trap.  Recently, when I decided to build one for my grandchildren I realized that I had forgotten exactly how to construct the trigger mechanism.

I recalled that Murray Fulcher had made one several years ago and had donated it to the Ocracoke Preservation Society museum.  Murray’s sister, Ellen Marie, explained that the trap had been put in storage because visitors would trip it regularly and no one but she knew how to re-set it.

We located Murray’s trap only to discover that one part of the 3-piece trigger mechanism seemed to be missing.   I carried the trap to several older men (Murray no longer lives on the island) but, of those I spoke with, only 83-year-old Fowler O’Neal was sure he knew how to cut and assemble the trigger.

That evening, while fiddling with the parts, it came to me how to put them together.  By morning, however, Fowler stopped by with a complete trigger mechanism he had carved.

In the interest of preserving an old island tradition I include complete instructions for building and using an Ocracoke bird trap, followed by a bit of history.

Cut one longer slat (about  14″ long) that can be laid over the top of the pyramid at right angles to the bottom pair of slats.  Tie a length of twine to each end of this top slat.  Tie the loose end of the twine to the bottom slat below it.  Pull the twine tight enough to bow the top slat slightly.  Pressure and friction will hold the entire apparatus together.  There is no need to use glue, nails, or any other fasteners.   In times past a piece of yaupon branch (a small native island tree) would often be used in place of a top slat.

The trigger mechanism consists of three parts, the standard, the treadle, and one other piece whose name I cannot recall.  They are better pictured than described. 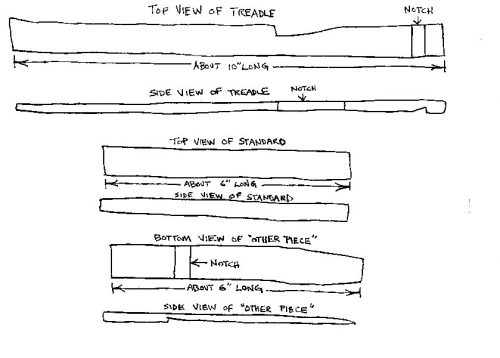 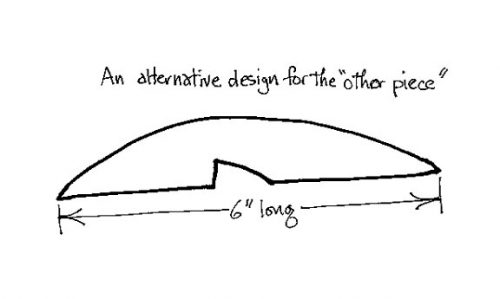 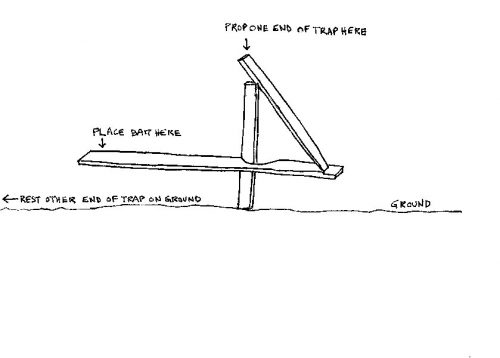 The dynamics of the trigger are such that the gentle weight of the trap on the mechanism is sufficient to hold the entire assembly together, but just barely.  The trap’s downward pressure on the “other piece” (whose tapered end is set into the end notch of the treadle) will push the treadle backwards.  This pressure will pull the center notch of the treadle into contact with the standard sufficiently for friction to stabilize all three pieces.   The end of the treadle will “float” near the ground, just high enough for a bird to peck on.

Lay a trail of bread or bird seed into the trap, carefully place bait on the end of the treadle and be patient.  The slightest jostling of the treadle will cause the entire assembly to disengage, allowing the trap to fall and capture the bird.

The beauty of this trap is that it is designed so that the bird trips the lever itself.  No one needs to wait and hide in the bushes, ready to pull a string to release the trap.

A search of the internet uncovered only one other clear reference to this type of bird trap.  Leon Laurent, a ninety year old man of Black and Choctaw heritage from Mandeville, Louisiana, is pictured with one of his wooden bird traps. His trap is virtually identical to the ones made on Ocracoke.

You can see his photo on the Louisiana Folklife web site.

In addition to Mr. Laurent’s Choctaw heritage, several things lead me to speculate that this type of bird trap is of Native American origin.  As mentioned, it uses no fasteners or glue and could easily be constructed of twigs. It is also excellently designed for catching birds that might be used for food.  In fact, Ocracokers of just a generation or two ago often talk about eating cedar waxwings, catbirds, and mocking birds.  The most sought-after bird, however, was the robin, apparently because of its sizable breast.

One islander reminded me that times were often very hard on Ocracoke a hundred years ago.  Food could be scarce in late winter or early Spring, and small birds, easily caught in a simple wooden trap, were a welcome addition to a sometimes meager diet.

In later years birds were as often caught just for sport, and then released.

If you decide to make your own Ocracoke bird trap, let us know how it goes, and please send us a photo, too!

Until next month, regards from Philip & the entire staff of Village Craftsmen.