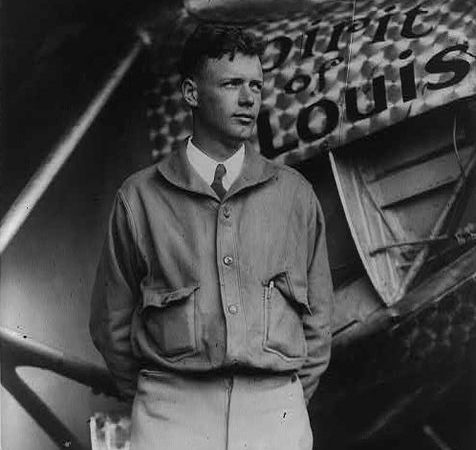 [The following article is from a collection of newspaper clippings saved by an island resident. I had heard this story many times. My father, cousin Blanche, and other older islanders all knew the story, but I had never seen this article before. It was almost certainly written by Aycock Brown (1904-1984), journalist and civilian Intelligence Officer on Ocracoke during World War II. Brown married island native Esther Styron. Although neither the name of the publication, nor the date, was saved, this article was probably published in.1974 — Philip]
On August 27 [1974], The News and Observer flashed the headlines “Lindbergh Dies at 72” – “N.C. Man Taught Lindy to Fly” and a picture showed the famous hero at Greensboro in 1927 with the N.C. Highway commissioner. Had this information been revealed sooner, another headline might have read, “The Day Lindberg [sic] Landed On Ocracoke.”

The following story which I have known for some time was recalled by several people living on the island and might now be added to the aviation lore of the Outer Banks. Twice history used the narrow strip of sandy banks as her launching pad – in 1903 when the Wright Brothers conquered the air at Kitty Hawk and in 1923 as “Billy” Mitchell took off from Hatteras to give aerial bombing its place in modern warfare. In 1927, the site of Ocracoke Island became a landing field for Charles A. Lindbergh whose recent solo flight was being compared to Columbus’ discovery of America.

After making aviation history May 20, 1927, by crossing the Atlantic from N.Y. to Paris (3,600 miles in 33 ½ hours) Lindbergh took his famous Spirt [sic] of St. Louis on tour of seventy-five American Cities and Mexico.

Charles Lindbergh and the Spirit of St. Louis: 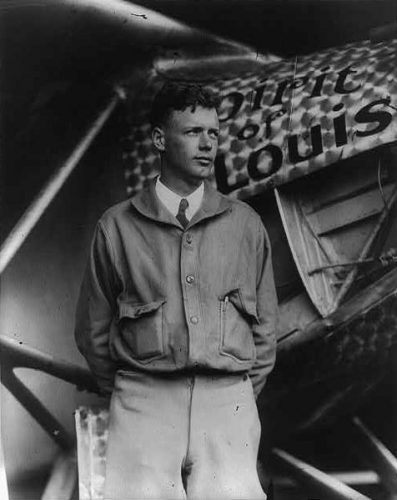 While flying over North Carolina on this famous tour the combined forces of night and weather forced Lindbergh to pick the Cedar Hammock Coast Guard Station on Ocracoke as his refuge. The beach was much wider at this point almost fifty years ago and the packed sand provided an adequate landing.

When Lindbergh arrived at Cedar Hammock the men had already finished their supper meal and Uncle Ben Gaskill, the station cook, was cleaning up the large kitchen when he was told to bring a serving of food to a lone visitor. At first Lindbergh’s identity was kept a secret, but while serving the meal, Uncle Ben’s eyes began to observe familiar features. In almost a single breath he exclaimed with surprise, “Why you look like that Lindbergh fella.”

Almost fifty years and the lack of living eyewitnesses prevent us from knowing the hero’s entire meal that evening, but Uncle Ben’s wife Sarah Ellen recalls that her husband prepared a dish of baked beans and Lindbergh told Ben that they were the best he had ever eaten.

Mrs. Beulah Willis who is a native of Ocracoke and living on the Island at the time of the famous visit told me that as Lindbergh was preparing to take off the next morning he offered to take Uncle Ben up for a ride in the famous airplane. Uncle Ben’s answer was quite typical of the skepticism held by most in his day who were not particularly fond of flying. “NO, NO thank you, Not Ben you won’t.”

This is a simple story, but it does cause us to ponder the statement once made that “Heroes are created by popular demand…” Even the gods on Olympus had to be served by the Greeks who created them.

Today there is a fine little landing strip on Ocracoke. Planes no longer had to land on the flat beach as Lindbergh did or pick a slack moment to land on the highway as I have so often seen them do. Since the Ocracoke air strip has no name it would seem proper for me to make this proposal – Why not remember the story of the meeting between the Hero [and the Cook]. 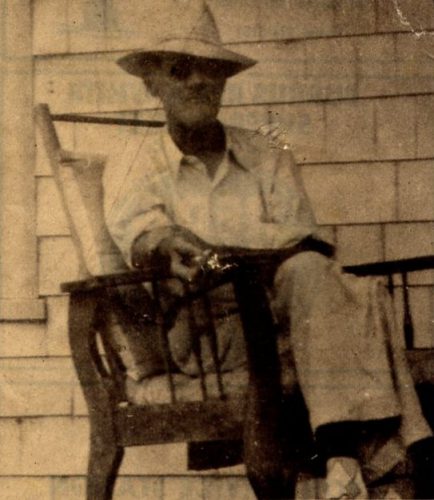 BEN GASKINS [sic] of Ocracoke was the cook at the Cedar Hammock Coast Guard station at the time Charles A. Lindbergh dropped down out of the skies and landed on the beach to spend the night on the island. Gaskins [sic], told to serve a “visitor” supper, did not at first recognize the famous aviator who was making a trip to 75 cities in his plane, “The Spirit of St. Louis.” But something was familiar to the Coast Guardsman and he finally said to the visitor, “You look just like that Lindbergh fella.” The year was 1927 (Photo courtesy of William Eley)