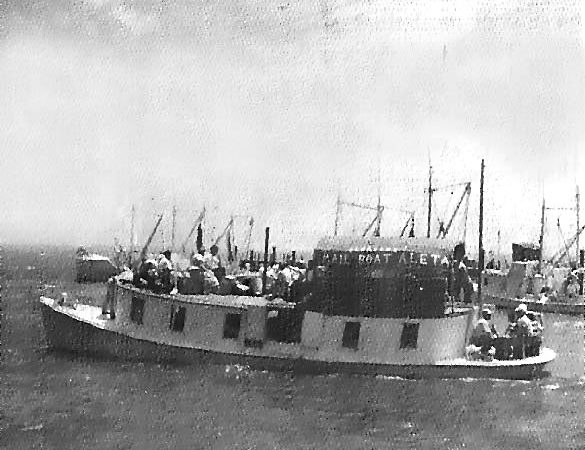 (reprint from a February 1, 1948 article in the Raleigh News & Observer, by Charles S. Killebrew)

Every morning of the year about 10 o’clock there can be seen chugging into the docks of Atlantic, N.C., an insignificant-looking little boat about 40 feet long, and painted white and orange. To anyone who doesn’t know, it appears to be just another of the fishing boats which ply the waters of the Core and Pamlico sounds, but to the people who live in that area, it means mail and freight from Ocracoke, situated on the Outer Banks and accessible only by boat or airplane.

The little craft, christened the Aleta, has been in use for well over 20 years. 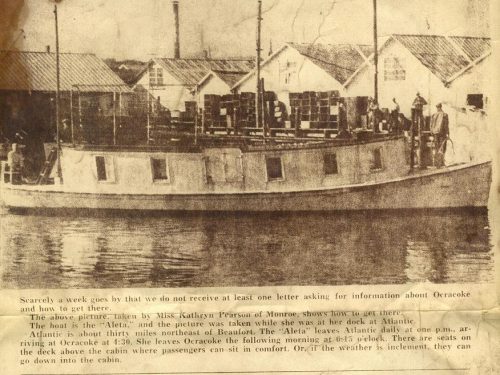 The small craft is met each day by groups of persons who have gathered on the docks out of pure curiosity or because they might be expecting freight from the banks. Also perhaps they are expecting a friend because the mail boat also carries passengers.

The Aleta makes connections with commercial bus lines both on arrival and departure from the mainland, and its drivers are on hand to take care of the passengers’ baggage at the docks.

When the boat docks, a door in the side of the engine room opens, and Captain George F. O’Neal begins putting the baggage, mail and freight ashore. Captain O’Neal is a man of 58 years, small stature, and with a brogue so thick you can cut it with a knife. His hair is snow white, and his face is browned from the wind and sun.

Th mail boat make a round trip to the mainland each day with the first leg beginning from Silver Lake on Ocracoke Island at 6 o’clock in the morning, and the return trip starting as soon after 1 o’clock in the afternoon as the mail arrives.

As soon as the mail is aboard, Captain O’Neal “gets her under way” and that is all you see of him until the boat docks at Ocracoke in Silver Lake, the natural boat basin on the island.

The engine room is on the same deck with the passengers’ cabin, but captain O’Neal closes the door to the engine room and all that is heard from the room is the incessant roar of the powerful diesel engine which pushes the boat.

Captain O’Neal says that he has carried almost everything in the freight line. “Why only last week,” he says, “I carried three sheep to Atlantic from Ocracoke.  I just tied them to the rail on top of the passengers’ cabin and they didn’t bother anybody,” he continued.

The passengers’ cabin is small and seats 10 or 12 persons comfortably. O’Neal says that the only restriction on the number of passengers he can carry is that there must be a life vest for each person aboard. He said that on one trip he had 60 women aboard. “They were all over everything,” he grinned. 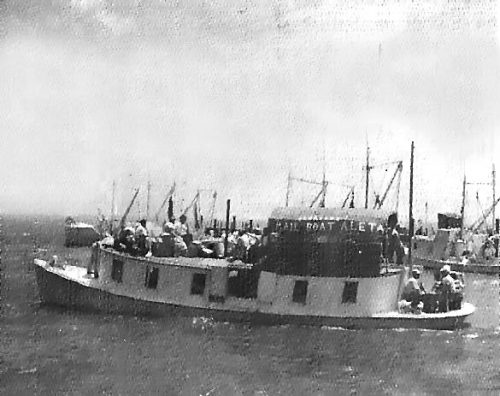 The mail route, one of the few left in the country today, is a star route and is secured by sealed bid for the government contract. The contract is for four years. O’Neal’s contract expires this year.

The Aleta makes two mail and passenger stops to and from the mainland.The first stop going towards Ocracoke is at Cedar Island, which boasts two post offices and a total of 280 inhabitants.

The second stop is Portsmouth Island, on which 15 persons live. In each case the mailman brings the mail to the Aleta by skiff. If there are any passengers to embark, the postman brings them also.

According to O’Neal, the mail boat goes every day of the year, and he misses only two or three trips each year, these being because of storms.

He is very proud of the fact that he has never had to be towed in by the Coast Guard, and strange as it may seem, on several occasions he has towed in Coast Guard boats.

When asked if the two four-hour, 30-mile trips each day became monotonous, Captain O’Neal just smiled and showed a twinkle in hi eye which seemed to say that no one becomes tired of the sea when they love it as much as he.