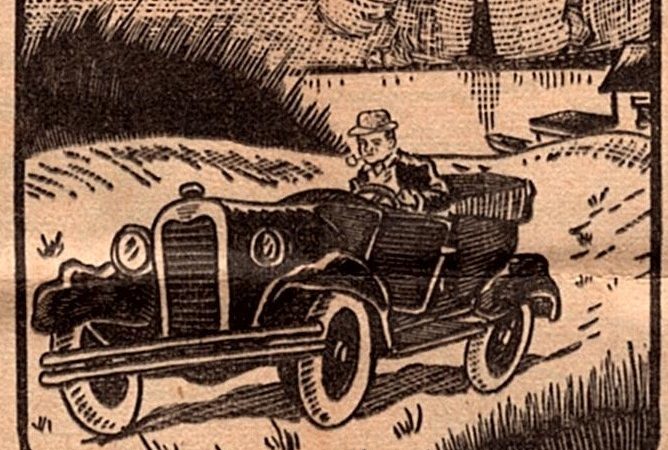 The following newspaper clipping (from the May 3, 1942, Times-Herald of Washington, DC) was discovered in a box of papers in the home of Blanche Howard Jolliff (1919-2018) after her death:

Three-century-old Ocracoke Island off North Carolina, once the rendezvous of Pirate Teach, known as “Blackbeard.: has recently been streamlined to include a semi-monthly newspaper and a deputy sheriff to collect taxes. Despite all this, the three-mile-wide island, sandwiched between Pamlico Sound and the Atlantic Ocean, retains its uniqueness in several respects. It has no jails, no mayor, no paved roads or sidewalks, and the six automobiles skimming along its sand trails carry no license tags.

The 525 inhabitants (1940 census) of Ocracoke Island live in one of the few places where people can operate automobiles without paying a State gasoline tax or carrying license plates. The reason is that there are no highways on the island — only trails in the sand that make motoring difficult. Tires on these automobiles are only about half inflated, lest they bog down in constantly shifting sands. Roads and sidewalks are impractical and present efforts to anchor the sand by planting grass and erecting “sand fences” are not completely successful.

Reputedly settled by sailors who had been shipwrecked upon its reefs during the 17th century, the island’s customs today are altered rather than changed by the coming of electric power, theatres, hotels, and an airplane-taxi service.

These island descendants of Anglo-Saxon, Scandinavian, and Middle Eastern racial strains are hardy fisher folk. They speak in heavy dialect, live strictly according to democratic processes, have no formal government, no jails, little crime, and no lawyers. If an unwritten code is violated, natives mete out what justice to the offender the circumstances may call for. Homes have no locks and visitors are surprised at the absolute safety of unprotected possessions, with one exception.

NO intoxicating beverages are sold on the island and bootleggers are not tolerated. A new dance hall contains the sign “Positively No Drinking or Fighting in this Hall.”

Ocracoke is steeped in legend. And it carefully preserves the “Old Pirate House” where Blackbeard tarred and caulked his ships, only to meet his fate in 1718 when he was shot for his misdeeds.