In our September, 2011 Ocracoke Newsletter, Slavery on Ocracoke (http://www.villagecraftsmen.com/news092111.htm), I observed that “[s]laves on the Outer Banks, especially pilots and lighterers, were often in contact with sailors, both black and white, from northern cities. Life at sea routinely blurred racial boundaries, which led to looser relations between slaves and masters on the sandy banks. And maritime slaves (pilots, fishermen, oystermen, and sailors) were frequently allowed a degree of freedom and independence unheard of on plantations.”

Ocracoke native, Cecil S. Bragg, in his 1973 book, Ocracoke Island: Pearl of the Outer Banks, mentions a letter written in 1921 by a former slave, Harrison Williams, to Mrs. Martha Ann Howard Wahab of Ocracoke. This letter illustrates a level of interracial acceptance and friendship typical of Ocracoke.

Harrison Williams was born into slavery in 1838, although Bragg does not tell where he lived and labored. According to Bragg, Williams “ran away from his master and reached Boston.” Bragg also notes that, after the Civil War, Williams “spent some time on Ocracoke and was well liked.”

From Williams’ letter it is clear that he held fond memories of his time on the island [in the late 1800s], and of his friendship with Martha Ann Wahab, her husband James Hatton Wahab, and other Ocracokers. 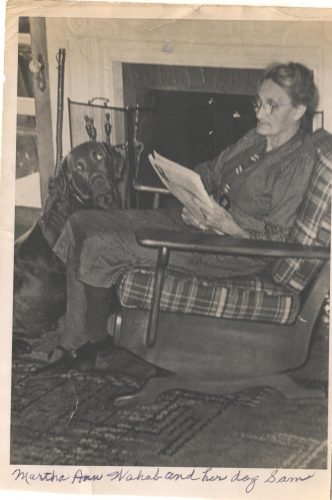 Bragg includes, on pages 139-140 in his book, a transcript of Harrison Williams’ letter, which he describes as “brown…[and] split with age.”  Below is the letter:

I was sorry to hear that Mr, Haton Wahab, is dead.

I am very thankful to you for answring my letter, and giving me so much information.

And I do remember a family that did live right in back of Mr. Wahabs house, by the name of Williams;

I remember a colored man by the name of Harkliss [Hercules], his wife was named Winnie, she had a little baby girl [Annie Laura].  I was converted while I was on the island, with Mr. Haton, When I came away I did join A baptist church.

I did get married when I was very young; we had five children, one died. All of them is grown up now;

My wif have been dead a long time; I wish I could see the old home on the island. if, I had found Mr. Haton Wahab, living I would have made it my business to come to the island because I would have found in him a friend.

Mrs Martha, Wahab I am not working now but I think I will get a job in the spring and if I dont, I would be glad if I could get you to get me a job with your son in Norfolk.

Do they have summer Hotels, on the island. and do the people hire colored help. I have worked in hotels. I have waiter in Hotels.

I can do most any kind of work. I am just about 6 feet high, 40 inches around the wast I way one hundard, and eath pounds.