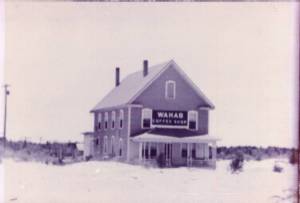 I was finally embarking on my much-anticipated vacation to my favorite destination and knew what to expect, or so I thought.

After being on the road for eight-plus hours, I would arrive at the Inn on Ocracoke Island after hours to find the office closed. The key to my room would be in an envelope with my name hand written and taped to the door. I would haul my luggage up the steep wooden stairs leading to a spacious second floor porch with slatted rocking chairs and let myself in. I would then go to room #21 enter and settle in for the week. During the week I will reacquaint myself with friends, both islanders and tourists alike, that I have come to know over the last decade and a half. Maybe sometime during the week I will officially check in at the office with a signature and such, maybe not. Some folks down here are more than a tad laid back. 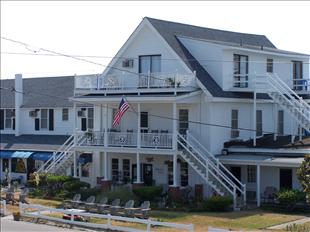 Did I mention that I specifically requested room #21 and why? No, I didn’t. The spirit of a past innkeeper reportedly haunts the Inn and room #21 is said to have the highest probability of paranormal occurrences. Objects have been known to be unexplainedly moved and sometimes even disappear, only to be discovered later in other parts of the Inn. Bathroom spigots have been known to turn on by themselves. Pictures on the wall are occasionally found to be askew in the morning. Sounds of an undetermined source have been heard and doors have been known to open and close unassisted. Rarely there have been reports of a full-bodied apparition going around the beds tucking the guests in. I was hoping to at least get some photographs of hazy silhouettes. Her name is Mrs. Godfrey and it is reported that she doesn’t choose to interact with men. What little I know about her history, I can understand why.

The Island Inn Before WWII:

During the Second World War the Inn’s owner, Robert Stanley Wahab hired Mr. and Mrs. Godfrey from the mainland to manage his hotel. The Godfreys lived in an apartment in the hotel and reportedly had many public domestic spats “fighting like cats and dogs.” The Islanders did not approve of such public displays for one should not air one’s dirty laundry. As my grandmother used to say, “You don’t wear your heart on your sleeve.” Some matters are best kept behind closed doors.

During the War, Mrs. Godfrey decided to visit with friends and family on the mainland for a few days. Back then travel to and from the Island was a task in and of itself. There was not the luxury of hourly ferries and such. The daily mail boat, the Aleta would leave from the docks with passengers shortly after sunrise and arrive in Atlantic in late morning. There the Aleta would be unloaded and then supplied for the return trip and would always return to Ocracoke by the late afternoon. Mr. Godfrey went down to the docks on the day that the Mrs. was to return and she was not there. Mr. Godfrey thought little of her absence, assumed that Mrs. Godfrey had changed her plans and would stay on the mainland a bit longer to visit. He looked forward to the continued respite from their squabbles. A week later Mrs. Godfrey’s body was discovered in an abandoned house on the mainland. Her throat had been slashed. Her killer was never found.

Mr. Godfrey soon returned to his duties at the Inn. It seems that no sooner than Mrs. Godfrey was interred, Mr. Godfrey would become haunted by her ghost. He would see her walking about the Inn and awaken in the midst of the night to her accusing stare. Doors would open and forcefully slam shut. Her cosmetics would be found rearranged on the dresser. The alcohol could not dull Mr. Godfrey’s senses enough and he could take no more. He left. She stayed.

The sun was rapidly closing in on the horizon beyond Silver Lake as I parked my car in front of the Inn on this comfortable early November evening. There was minimal lighting emitting from the Inn as dusk enshrouded the Island. The walkway and entrance basked in the glow of external lanterns and on the second floor the lights were on in the hallway and the corner room (which was not mine).

I fetched the room key from the envelope taped to the door of the closed office, as expected. I hauled as much of my luggage as I could handle up the external wooden stairs past a sign that read “ Please use handrails. Stairs are steep.” How well I knew. I grasped at the handle to the porch door that would allow my entrance. It would not turn. I tried the knob again more forcefully, but did not wish to break it.  This was not expected. I set my gear down on the wooden rocker and tried my room key on the door. It would not fit. I called the provided number on my cell phone, but the call was not forwarded. Instead the call went to the voicemail. This was not expected. I gazed through the door window with its gossamer curtain as I left a message on the other end. “Hi Cee, this is Tom from Wilmington, the one in Delaware. I’m here at the Inn and the upstairs porch door is locked and I can’t get in.” My voice was taut with frustration as I said, “I just don’t know what to do.” As I spoke those words in despair, I heard a very distinctive click come from the doorknob. I hung up my phone and tried the door once again. The knob turned with ease and allowed my entrance to the Inn. The hall was well lit and if someone were on the other side of the door, I would have seen them. I saw no shadows or movements or anything that could be attributed to optical illusions. Nobody was there.

As I entered and made my way to the rear of the Inn where room #21 awaited, I saw that the doors to all the rooms were closed and secured, with the exception of mine. The door was slightly ajar and the inside lights were on as if someone were awaiting my arrival. I then said aloud, “Thank you Mrs. Godfrey!”  Not once during my stay did I feel as if I was being watched or someone else was present. The room was furnished with antique furniture, figurines, and eye pleasing prints adorned the walls. I felt as if I was staying in someone’s home and settled in for a comfortable night.

A Typical Room in the Island Inn: 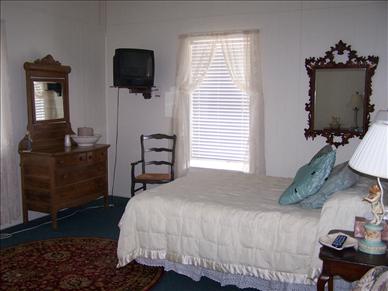 The following morning I encountered Rusty who assists with the daily operations of the Inn. He inquired if was comfortable and if I needed anything. I related my experience of the previous night. He asked if I had tried to call the number provided and said that it would have forwarded the call. I related that it did not and went to voicemail. Rusty then mentioned that he has locked that door only about three times in the last five years and admitted that he did indeed leave it locked the day before. He then asked how I got in. I ventured to guess that Mrs. Godfrey’s duties as the past innkeeper superseded her reluctance to interact with men. Rusty replied that that was the only explanation for I was the only living being in the building last night. Nobody was there.

The author would like to gratefully acknowledge Philip Howard of Ocracoke, NC and the proprietors of the Island Inn for the historical information used in this writing.

Information about the Island Inn is available here: http://www.ocracokeislandinn.com.