Ocracoke Island has only had official street names for a few years; and street signs for just several months. Not so long ago folks from off-island, particularly first time visitors, would often wonder how we ever managed without street names.

New Street Signs in the Village: 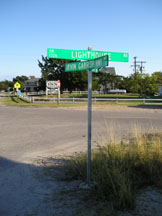 The truth is that we did have street names. They were simply unofficial, flexible, often multiple, and frequently confusing.  In short, they suited most Ocracokers just fine.

For example, the road directly across from the fire hall was among the very first streets paved on the island. When the US Navy established their base here in July of 1942 they found the deep soft sand lanes unsatisfactory. They created an ammunition dump along the ridge that now connects the Oyster Creek development and Jackson Dunes. In short order they paved a one-lane concrete road from their base on the harbor to the dump. A few of the aprons that served the dumps are still visible on present-day “Cutting Sage Road” and “Trent Drive.” That section of road directly across from the present-day fire hall was dubbed “Ammunition Dump Road” by locals.

Later on, after the fire hall was built, the road was sometimes called “Fire House Road.” In the mid to late 1960s Lloyd Harkum, from Norfolk, Virginia, purchased property along this road and divided it into small lots. He officially named this thoroughfare “Sunset Drive.” In the 1970’s, before the trees had grown so tall, the top of the lighthouse was clearly visible as you were driving west on this road. A few folks referred to it by its most confusing moniker, “Lighthouse Road.”

“Cutting Sage” [an alternate spelling of “Cutting Sedge,” a member of a family of tufted marsh plants, Cyperaceae] is the traditional name of the road referred to above, the road that leads from Sunset Drive to Oyster Creek. Confusingly, the road over the first bridge in Oyster Creek, which intersects “Cutting Sage,” is named “Cutten Sage Lane.”

The southeast extension of Cutting Sage is called “Trent Road.” One historically major section of Ocracoke village included this area near Pamlico Sound and beyond the present-day community cemetery. It is called “Up Trent” and, although all of the homes there today are relatively new, years ago quite a few islanders lived amongst the trees there.  Hence, “Trent Road.”

The main part of Ocracoke village has traditionally been divided into two distinct areas by native islanders. “Down Point” refers to “Springer’s Point” (where the first European settlers built modest homes in the 1700s) and that part of the community on the south side of the harbor. This area was originally called just “The Point” and later “Williams Point” or “Howard’s Point” depending on who owned it. In 1883 E.D. & Clara Springer, from South Creek, North Carolina, purchased this tract of land. Although they never made this their permanent home , the point still bears their name.

Sometime prior to 1835 an increasing number of residents had built homes and businesses around the north side of “Cockle Creek” as “Silver Lake” was originally called. This was a wide but shallow tidal creek. The periphery of the creek was dominated by marsh grasses. The tidal flow extended toward the bald beach in the form of two guts or streams. They effectively divided the village into two distinct sections – “Down Point” and “Around Creek.” After “the creek” was dredged by the Navy in 1942 to accommodate larger draft vessels, and the spoil was pumped into the village to fill in the guts, its official name became “Silver Lake Harbor.”

At one time Howard Street was referred to as the “Main Road.” In 1835 what had been merely a foot path was widened by court order and made a public thoroughfare. It extended from close by the present-day “School Road” all the way to the Sound (in the vicinity of today’s National Park Service Visitor Center). Several stores were located in this area – Mr. Blackwell’s store, John Pike’s store, and Willis Williams’ store and tavern. The area “Around Creek” grew considerably, especially since the post office and mailboat dock were located there.

Once the state of North Carolina took control of the ferry operations in the mid-1950s and decided to pave many of the island’s sandy lanes Ocracoke’s destiny began to change. Much was in the offing. Early on the pavement was extended around the harbor from the Navy’s concrete road. Where once there had been little more than a foot path, there was now a hard surface road (where Highway 12 is today).

This meant that the western end of the “Main Road” (in front of the Community Store) was now paved. And that left the eastern end of the road still a one-lane sandy path lined by family cemeteries and embraced by cedars and gnarled old live oaks.

It wasn’t long before Stacy Howard nailed a hand-painted sign to a tree in front of his house. “East Howard Street” it read. The new name stuck. Of course most of the residents there were Howards, and it was the eastern end of what had been the “Main Road.” 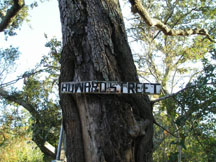 Still today, many older residents refer to our quintessential village lane as “East Howard Street” though maps and common usage are generally satisfied simply with “Howard Street,” content to ignore or forget the reason it was once designated as “East.”

Statewide Enhanced 911 Emergency Service now dictates that Ocracoke, like the rest of the state, have official street names and road signs posted throughout the village. It is taking many of us a while to adjust to this type of “progress.” It is still common to hear O’cockers talk about the “Point Road,” or the “Ammunition Dump Road,” or perhaps “Ollie Syron’s Road” simply because that’s where she lived.

And we can’t always remember the new names of our island roads. So we’re likely to give directions something like this: “Turn left on that corner where you’ll see the old wooden skiff piled up with conch shells; pass the Back Porch Restaurant and then turn right at the fire hall (the Coffee Shop is on the left corner); make the second left; then turn left again (if you drive into the cemetery you’ve gone too far); it’s the house on the right with the green porch swing.”