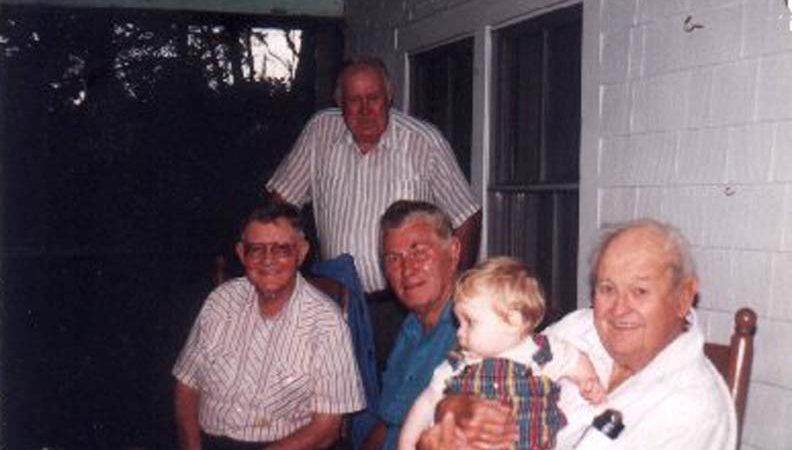 Ocracoke native Charlie Morris O’Neal was born October 21, 1921.  He died March 27, 2005.  His family asked me to deliver the eulogy at the Ocracoke United Methodist Church for his funeral on March 31, 2005.

Several readers have asked me to publish my words.  I am happy for one more opportunity to share Charlie’s story for family & friends of Ocracoke. 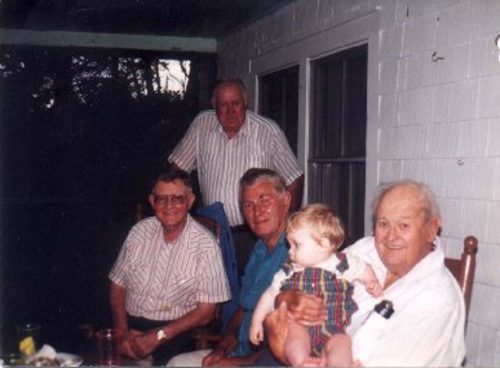 Lorena, Lisa, Bill, Aaron, Evin, and Liam….thank you for asking me to share stories of Charlie this afternoon. I count it as an honor.

Charlie Morris O’Neal was born on Ocracoke Island October 21, 1921 to Maggie and Charlie Minor O’Neal. They lived in the house directly behind the present-day Anchorage Inn.

Ocracoke’s midwife was busy that October 21. Just three doors down the lane Fowler O’Neal was born the same day. Charlie and Fowler had a running debate their entire lives about who was older. Details of the day had grown fuzzy over time and the truth seems to have eluded everyone, so the controversy was never resolved. However, I was visiting with Lorena last evening and she told me she was certain Charlie was older.

“How do you know?” I asked her. Lorena’s reply was quick. “Charlie’s mama was never late,” she answered.

As a young boy Charlie loved to run. He’d practice running up and down the sandy lanes. He and Fowler were constantly in competition to see who could run faster. When Charlie was 11 or 12 years old a track star from NC State University was visiting Ocracoke. Charlie challenged him to a race. And Charlie won! From that day on, whenever Fowler claimed to be a faster runner, Charlie would just listen and smile….for he knew he could beat a college track star. (Charlie did admit, however, that Fowler was a better swimmer.)

Charlie had an older brother, born about 10 years earlier, but he died in infancy. As a result Charlie was raised as an only child.

Last summer I visited Charlie and he told me stories about games the children enjoyed on the island years ago. They played Annie Over the House, King Stick, Spittle Spittle Spat & Cat. Cat was a colonial game much like baseball that survived on Ocracoke until the mid twentieth century. The children had no bat, so they used a board. Instead of tagging a player out, they would throw the ball at a runner and hit him. Charlie once made his own baseball from an old leather shoe that Miss Lot gave him.

When he was 17 years old Charlie’s father died. Charlie tried his hand at fishing for a while, but a half cent per pound of fish was just not enough money to support him and his mama.

Charlie’s uncle, Willy O’Neal, was working in Philadelphia at the time, and he offered to get Charlie a job with the US Army Corps of Engineers on the dredges and tugboats on the Delaware River. Charlie borrowed $5 and headed for Philadelphia.

Charlie said he went up north to find his fortune. He didn’t find a fortune, he told folks, but he did find indoor plumbing. Charlie allowed as how that was just as good as a fortune, maybe even better.

Before Charlie left Ocracoke Jones Williams admonished him to always save a little bit of money. Charlie took the advice to heart and regularly bought treasury bonds. Jones had one of the few safes on the island, so Charlie sent the bonds back home to him for safe keeping Eventually Charlie saved up enough money to buy his first car. He paid one hundred dollars for it.

In 1957 Charlie married Lorena Ballance. Charlie and Lorena were both born on Ocracoke, and knew each other, but interestingly never dated until they both had moved to Delaware. They had one daughter, Lisa. In 1982 Charlie & Lorena welcomed their son-in-law, Bill, into the family.

Several friends attest that, as a young man, Charlie was known as quite a good dancer. Surprisingly, Lorena didn’t know this about Charlie! It was only in later years that she learned that Charlie was “light on his feet.” Whenever acquaintances would comment on his dancing Charlie would just listen and smile.

Charlie Morris never had the advantage of much formal schooling, but he knew the value of education. And so it was that he encouraged Lisa to go away to college and get her degree.

Charlie always enjoyed reading. As a young boy he would buy 10 cent westerns which, after reading, he would trade with other boys. He made it a habit to read the newspaper daily and in later years often checked out books from the library.

The advice he took pride in sharing with young people was, “Always watch the news or read the paper every day.”

While working in Philadelphia Charlie had opportunity to take advantage of the city’s many cultural offerings. He enjoyed the old vaudeville routines, and regularly went to shows featuring Tommy Dorsey, Roy Acuff and other stars of the day. It is said that he would stand in line for hours just to hear Frank Sinatra. If no one else was interested in accompanying him Charlie would go by himself. He even learned to appreciate opera while up north.

After many years working in Pennsylvania Charlie retired in the early 1960’s. He returned home to Ocracoke and embarked on a second career with the North Carolina Ferry Division. I’m told that he would bring recordings of opera down to the ferry office and play them for Christine and Sharon. They couldn’t figure out why Charlie enjoyed that kind of music and they would tease him because he couldn’t even speak Italian. Charlie countered by pretending to understand the language and “explaining” the lyrics to the girls. He would make up elaborate story lines and entertain Christine and Sharon with his fanciful tales.

.Charlie’s third career was meeting with “the boys” on the benches at the lifeguard beach. If Charlie arrived late someone would say “Slide over boys and make room for Charlie.”

Later on they’d meet at the base docks to watch the sunset. The boys would entertain each other by telling jokes & tall tales, catching up on island news, sharing recipes, and reminiscing about their younger days when they lived and worked in Philadelphia. Sadly, many of the boys have died.

Charlie’s fourth career was undoubtedly his most rewarding — playing with his three grandsons, Aaron, Evin, & Liam. To them he was affectionately known as Pop Pop.

Charlie was an enthusiastic baseball fan. He had even acquired a couple of Atlanta Braves memorabilia – an autographed baseball, and a bat that had been cracked in play. He carried these down to the base docks one evening to show to Fowler, Lawton, Bill, and the rest of the boys. “They weren’t interested,” he said. “They looked at them and then just went back to talking about mulleting.”

Whenever possible Charlie would make time to share interesting stories. He liked stories that would provoke comments and he particularly liked to “stir the pot,” albeit in a quiet way. He would practice his story over and over in order to “get it just right” so he could “get ’em going.”

Charlie enjoyed cooking now & then, and would occasionally exchange recipes with my dad. As with my dad, he took pride in his clam chowder. And he was always in search of a hotter hot sauce. Along with other old-time O’cockers, Charlie enjoyed those special dinners of fresh fish, I’sh taters, and collards at Bill Gaskill’s workshed.

Charlie always liked to laugh & share a good joke. He had an impish smile & a mischievous twinkle in his eye. To his credit he never took himself too seriously.

Aaron, Evin, and Liam, your grandfather was proud of you. You are the next generation of islanders, and the keepers of our traditions. Charlie Morris (and much of old Ocracoke) will live on as family & friends continue to share his stories & pass them on to future generations.

During the last few days of Charlie’s life he told his family and the hospital nurses, “I have lived a good life, I have accomplished everything I have set out to do, and I am not afraid to die. Don’t worry about me.”

Now all the boys will have to slide over on the bench and make room….Charlie
is coming to join you.