Ocracoke’s 75’ tall white tower with a steady beam is the island’s most recognizable landmark. Built in 1823 by Noah Porter of Massachusetts for $11,359.35 (this included the one-story keeper’s quarters), the Ocracoke Lighthouse is actually one of several lights that have guided mariners through the often-treacherous Ocracoke Inlet and surrounding shallow waters. 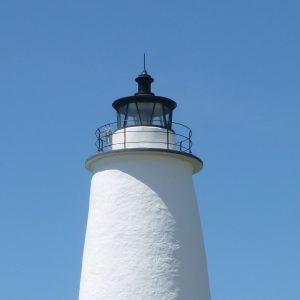 In 1715 the North Carolina colonial assembly passed an act to settle and maintain pilots at Ocracoke Inlet. Knowledgeable locals familiar with the shallow Pamlico Sound and the ever-shifting channels, shoals, and sandbars were necessary to protect shipping interests to and from mainland North Carolina ports.

Because pirate captain Edward Teach and numerous other buccaneers had made Ocracoke Island a haven for outlaw sailors, few law-abiding colonists were brave enough to settle on this remote and isolated spit of sand in the early eighteenth century. For decades ship captains sailed through Ocracoke Inlet and across Pamlico Sound as best they could, without help from local pilots.

No one knows for sure when the first Europeans permanently settled on the island. However, Ocracoke was considered a town by 1753, and virtually all of the original male residents were pilots.

In 1789 the North Carolina General Assembly, recognizing that even more needed to be done to help ensure mariners’ safety in the vicinity of Ocracoke Inlet, passed legislation to erect a lighthouse on Ocracoke. On September 30, 1790, five islanders (William Williams, John Williams, Joseph Williams, William Howard, Jr., and Henry Garrish) deeded a one-acre parcel of land to North Carolina for the purpose of erecting a lighthouse.

Because of the concerns of local pilots and merchants, as well as owners and captains of vessels that used Ocracoke Inlet, authorities decided that the lighthouse should instead be built on nearby Shell Castle Rock, just inside Ocracoke Inlet. This relatively stable 25-acre island of oyster shells was developed in 1789 by John Blount and John Wallace. At one time as many as 40 people lived and worked there, among docks, warehouses, at least one small store, modest homes, and even a wind-powered grist mill.

Congress authorized this first beacon in 1794, but it was not illuminated until 1803. According to a deed from J.G. Blount and John Wallace of February 7, 1795 for “land necessary for a lighted beacon on Shell Castle Island” it was stipulated that “no goods should be stored, no tavern be kept, no spirits be retailed, no merchandise be carried on, and that no person should reside on, or make it a stand to pilot or lighter vessels” on the land set aside for this lighthouse.

The lighthouse was a 55’ wooden, pyramid-shaped tower covered with cedar shingles and erected on a sturdy stone foundation. Atop the tower was a six-foot lantern and a three-foot dome. The builder of this lighthouse was Henry Dearborn, who also built the first Cape Hatteras Lighthouse. Light was provided by one large whale oil lamp with four wicks.

The lighthouse is shown on an 1805-1810 pitcher (on display at the North Carolina Museum of History in Raleigh) bearing an image of Shell Castle. This is the earliest known image of a North Carolina lighthouse, and the only surviving depiction of this early nineteenth century beacon and the business complex on Shell Castle Island.

Almost immediately after it was completed the Shell Castle Light was made ineffective for navigation due to the ever-changing channels and shoals. By 1806 the channel had moved so far that the lighthouse was almost totally useless. Construction of a new tower was authorized. On August 16, 1818, lightning claimed the original structure and the keeper’s quarters before a new tower could be built.

Not quite two years later, on May 15, 1820, funds were appropriated to station a light ship in Ocracoke Inlet. This proved inadequate for its purposes, and after two more years $20,000 was approved for the construction of the present Ocracoke Lighthouse. Jacob Gaskill, Justice of the Peace, sold the two-acre parcel of land for the lighthouse to the government for fifty dollars on December 5, 1822.

The 1823 Ocracoke Lighthouse stands 75 feet tall and tapers from a diameter of 25 feet at the base to 12 feet at the top. The tower’s solid brick walls are five feet thick at the bottom and two feet thick at the top. Although designed by Winslow Lewis, a New England sea captain, engineer, and inventor, actual construction was awarded to Noah Porter of Massachusetts, considered by most to be a much more competent builder. A counterclockwise wooden spiral staircase rose from the ground floor of the structure to within six feet of the lantern room floor. It was supported by a hollow central column and affixed to the inner brick wall. Landings were constructed adjacent to three of the lighthouse’s six windows. An iron ladder, with 2 ½” steps, led from the top of the stairs to the scuttle (hatch) in the lantern room floor.

The original lantern room for the Ocracoke lighthouse was of the “birdcage” design. The 1822 construction contract specified that “on the top of the tower” was to be placed “an iron lantern of an octagon form…. The height and diameter of the lantern to be sufficient to admit an iron sash in each octagon, to contain twenty one lights of fourteen by twelve glass, the lower tier to be filled with copper….” 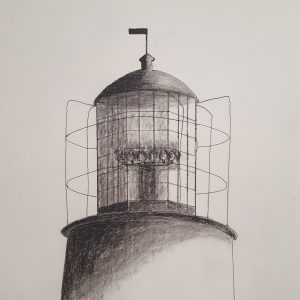 The illuminating apparatus consisted of fifteen Argand lamps and an equal number of parabolic reflectors and glass magnifying lenses. Whale oil was the fuel. This arrangement was the creation of Winslow Lewis. 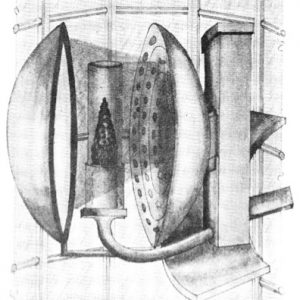 The drawing above, of a Winslow Lewis apparatus, shows the Argand Lamp in the center. The Argand Lamp (invented by Swiss-born physicist Aime Argand in 1782) used a circular wick placed between two thin concentric brass tubes, and enclosed within a glass chimney. To the right is the thin, silver-plated copper reflector. On the left is the lens. A reservoir to hold the oil is situated behind the reflector.

John Blount (1752-1833) described the new Ocracoke beacon soon after it was put in service. He wrote, “At the entrance, on Ocracoke Island, a lighthouse is erected, exhibiting a revolving light, which you leave on your starboard hand entering the inlet. The time of each revolution is two minutes. It is elevated 75 feet above the water.” Although today there is no clear evidence of the clockwork mechanism that powered the revolving light, it is presumed that the hollow central column that supported the staircase provided space for the necessary weights and chains.

In a letter dated December 18, 1830, and published in 1832 by the Ocracoke District Collector’s Office, the reason for the Ocracoke light is made perfectly clear: “Its object is not to guide vessels into the harbor [this refers to the deeper waters of Teach’s Hole, not to Silver Lake Harbor) as no one can enter at night, but to give warning to mariners when off the Inlet, or to prevent vessels bound in from passing the bar at night.”

Unfortunately, Lewis’ parabolic reflectors tended to warp, resulting in a spherical shape. And the lenses were quickly covered with soot, greatly reducing the luminosity. In 1849 ten new lamps and twenty-one reflectors replaced the original apparatus, but problems remained.

In 1853 the United States Lighthouse Bureau decided to replace the inferior Lewis apparatus with a new Incandescent Oil Vapor (I.O.V.) lamp which employed air pressure and a fuel vaporizer to preheat the kerosene to produce gas vapor before the fuel was ignited.  I.O.V. lamps produced at least three times the light output of the Argand style lamps. At this time the Ocracoke lighthouse was also fitted with a new fourth-order Fresnel lens, a technological leap in lighthouse lighting. Augustin Fresnel, a Frenchman, had invented his new lens in 1822, but the Lighthouse Board had resisted making changes to US lighthouses. The much more efficient Fresnel lens, a marvelous array of precisely arranged hand-cut glass prisms and bull’s-eyes, was installed in 1854. The light was concentrated into parallel rays that produced a much brighter beam from a single light source. The Ocracoke light was now equal to 8,000 candlepower and was visible 14 miles to sea.

The Fresnel lens was manufactured by L. Sautter et Cie of Paris, France. 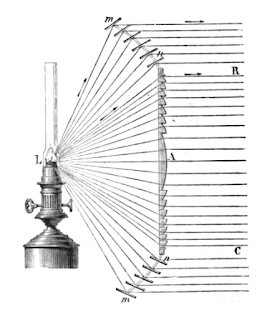 At the same time, Thorton A. Jenkins, Secretary of the Lighthouse Board, announced that the “present revolving light at Ocracoke, about 23 1/2 nautical miles to the southward and westward of Cape Hatteras Lighthouse, will be changed to a — Fixed White Light, with a focal plane 75 feet above the level of the sea….” The original birdcage lantern room was removed and replaced with a prefabricated lantern room manufactured by Hayward, Bartlett & Co. of Baltimore, Maryland, with twelve alternating trapezoidal glass panes. In order to make room for the scuttle in the floor, the new smaller lantern room was positioned slightly off-center.

In 1897/1898 major renovations were made to the Ocracoke lighthouse, including installing a new I.O.V. lamp. A new Fresnel lens was installed sometime after 1927. The bronze base of the new Fresnel lens, which is still in use today, is embossed with the name of the manufacturer, “F. BARBIER & Cie. Constructeurs PARIS – 1890.” 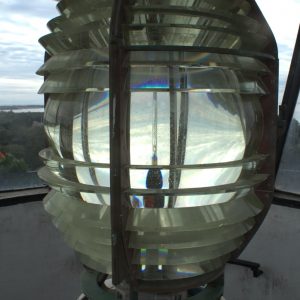 The base for the lens was supplied with built-in service wheels which allowed the keeper to rotate the lens for cleaning and maintenance. 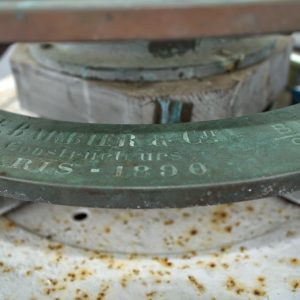 Over the decades several different fuels were used. In 1867 lard took the place of whale oil; and eleven years later the much more economical kerosene replaced lard. Finally, in 1929, the beacon’s oil lamp was replaced by an incandescent bulb. It was probably at this time that the current Fresnel lens was installed.

The present-day 250 watt quartz-halogen marine bulb is barely larger than the last two joints of a little finger. Four identical bulbs rest at ninety degree angles in a sophisticated lampchanger that automatically rotates to a new position when the top active bulb burns out. The lamp is activated by a light sensor and can be monitored remotely. A backup generator helps ensure a steady beam under virtually any conditions.

From 1853 to 1861 another lighthouse operated on nearby Beacon Island, just a short distance from Ocracoke, in Pamlico Sound. This beacon was 39 feet high. By 1857 it was considered useless, again due to the shifting channels. The same fate befell a new lightship that was installed near Ocracoke Inlet at about the same time.

Following is a list of all keepers of Ocracoke Lighthouse:

More information and photos from inside the lighthouse are available here: https://www.ocracokenavigator.com/ocracoke-lighthouse/#photospheres.

For descriptions and photos of various lighthouse lamps, regulators, and burners see http://uslhs.org/sites/default/files/assets/resources/Lighthouse%20Related%20Patent%20Models.pdf.

(Details about the original lantern room are based on a conversation with Wayne Wheeler, president of the U.S. Lighthouse Society, and with employees of the National Park Service. Information about the lamps and Fresnel lenses was updated 5/30/18 based on correspondence with author Cheryl Roberts and her contacts with Candace Clifford and Tom Tag of the U.S. Lighthouse Society.)