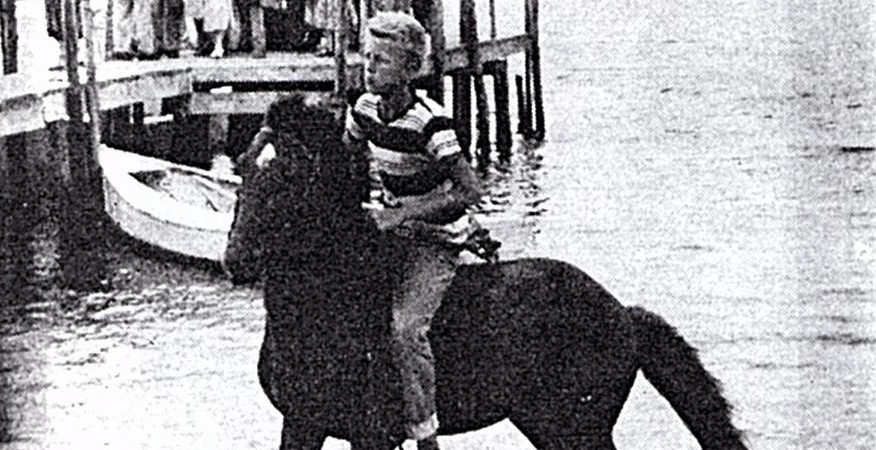 The following article (author unknown, but with the explanation,“information and photos supplied by George Tichenor”) is copied from Junior Natural History magazine, February, 1956.

Off the coast of North Carolina is Ocracoke Island; a spot rich in history, heroism and legend. It is a sixteen-mile strip of the Carolina Outer Banks. Pamlico Sound separates it from the mainland. The Inland Waterway between New York and Florida down which so many small craft sail makes it an anchorage. A quarter-mile oval of blue water gives it a beautiful harbor.

At the southern end of the island is the village of Ocracoke. Here live some five hundred and fifty healthy ruggedly individualistic people – mostly related, descendants of the original seven families who settled the island. Although closely related through marriage, they produce strong stock and live to ripe old age. Nearly every family has a relative in the home of at least seventy-five! All appear healthy. No doctor lives on the island, only a nurse. The sea provides the main diet – fish.

Ocracoke is not a town of comforts and convenient luxuries as most of us know them. There are no sidewalks. No street lights shine on the sandy lanes. There is only one paved road. It was built by the Navy when they occupied the island [during WW II]. It is a mile long and nine feet wide; just wide enough for one car at a time to travel its length.

The island has its cars. Many people own one; but few bother to register it unless it is taken on the mainland. This isn’t due to lack of money, for no one seems poor.

Life in the village of Ocracoke is quiet and free. It is not controlled by a mayor (there is a civic cub instead). It has no jail, no sheriff, no crime —and no problem children. Even the speech of its people is different – so different a native southerner finds it hard to follow! As Mr. Tichenor described it: “the speaker starts with a drawl seems to think better of it and attempts to swallow his words too late!”

Children on Ocracoke live a wonderful life. Although they share from childhood in the work of the adults, they enjoy everything and have a sense of belonging in the scheme of things. Boys of all sizes ride their domesticated horses bareback. Their steeds come from the band of beautiful wild thoroughbred Arabian horses that roam the sand dunes of the island. Occasionally a sale of captured horses is held. Buyers come over from the mainland for the event. Teenage boys often get up at six in the morning and ride herd until perhaps two-thirty in the afternoon to make the sale worth-while.

Boys and men seem to be the riders; but everyone dances. They do it often and take it seriously. Several nights a week men, women and children gather in the local school house and solemnly feed quarters to a brilliant, garishly-colored juke box.  Then, without a reel caller, they dance their square dances. No one seems to run the affair; no one collects the money; all enjoy themselves in a solemnly-gay sort of way.

The biggest occasion for all on the island is a three-day Fourth-of-July celebration. There are speeches by the local minister, prizes for the winning bathing beauty, rescue drills by the coast guard, penning and roping of “wild bulls.” There are floats and masquerading and drills by the “only mounted boy scout troop in America!” There is even an “imported’ policeman from the mainland to direct traffic – which goes as it wishes anyway!

A great event of each day is the arrival of two boats from the mainland. The one reaching the northern tip of the island [Frazier Peele’s four-car private ferry] brings passengers, trucks and private cars. Often passengers disembark in six inches or so of sea water and wade to drier sands. They then have sixteen miles of shore line to travel to reach the village. Driving or walking the tide or wet sand can bog them down. Those coming on the mail-and-passenger ferry [the mailboat Aleta] at the southern tip of the island fare better. But they too may be delayed by the tide and condition of the beach. In fact, all events on the island are regulated by the tide. It even put a wedding reception before a wedding!

Many young [men] go to college on the mainland; many others serve in the armed forces. But practically all of them return to the island to live. They become fishermen or join the coast guard. The sea and its traditions have left its mark everywhere.

The long strip of the Outer Banks upon which the historic village of Ocracoke is located is rich in legend history, and bravery. Its wild, lonely, flat beaches hold hundreds of partially buried hulks and bits of wreckage from ships; victims of storms, accidents or human violence. The famous “ghost” ship, the Carroll A. Deering left its bow on Ocracoke Island. The ship was found stranded on Diamond shoals just off the Cape Hatteras coast guard station in 1921. Food was still in the galley pots; but no living soul was on board, only the ship’s cat. What a tale it could have told! Later on the bow drifted to Ocracoke’s beach.

The ill-fated English settlers of Raleigh’s expedition landed on Ocracoke Island before going to settle on Roanoke Island in 1585. Later, settlers stayed and played an important part in the Revolution, bringing in valuable material to Washington through the blockade. Many ancestors of these brave people became coast guardsmen.

Our National Park Service is helping to preserve for future generations the history and color of the place At Cape Hatteras, within the national seashore recreational area, is a Maritime Museum.

Ocracoke Island and the rest of the strip of the Outer Banks didn’t exist some 20,000 years ago. During the last glacial period the sea level was about fifty feet lower than it is today; the shore line was about twenty-five lower than at present. Pamlico and the other sounds were sand flats. Winds gradually shifted the sand and built up dunes and ridges which started the formation of the Outer Banks. When the huge continental ice sheet melted, the sea came in and flooded the sand levels and made the Sounds. Winds still continue their building-up and tearing-down work with the sand dunes.

At Cape Hatteras the sands underwater are gigantic dunes two hundred feet high. They are so high they almost rise above the waters for twelve miles from Cape Hatteras Point straight out to sea. If you stood on the Point on a stormy day you could see these turbulent waters “come together in an awesome display of savage fury.” Flowing from the Gulf Stream of the Caribbean they cascade into huge foamy sprays. This action continually builds up the underwater dunes of Diamond shoals, the barrier that means death to any ship caught within it.

To the north of Ocracoke Island on the Outer Banks is Pea Island National Wildlife Refuge, supervised by our Fish and Wildlife Service. Here, migrating waterfowl find refuge. Several thousand winter on the island; goose, brant and all species of ducks of the North Carolina coast. Many whistling swans stay for the winter. Loons, grebes, herons, egrets, gulls, terns, vultures, bald eagles, morning doves and others can be seen.

As so often happens, the isolated uniquely independent little village of Ocracoke is about to feel the effects of “civilization.” A road [NC12] connecting it with the mainland, is to be built. With it will come many changes that no amount of historic background and stamina can withstand. What will it do to the free-living, closely knit, picturesque sea dwellers of the island? What will be the fate of the beautiful wild horses that claim this stretch of sand and sea as their own? Only Time will tell.