Although hospitals were well known in ancient Greece and Renaissance Europe, they were a relatively late development in the burgeoning British Colonies. The first was Pennsylvania Hospital in Philadelphia, founded in 1755.

Similar institutions followed…New York Hospital (1775) and Massachusetts General Hospital (1821)…but hospitals were virtually unheard of in the South before the Civil War. Patients were treated in homes, barracks, monasteries, or whatever shelter suited the occasion ( “derived hospitals”).

Physicians converted large residential dwellings to “proprietary hospitals,” a practice that persisted and evolved into the twentieth century. However, the phenomenon of a building planned, constructed, and used as a hospital (“designed hospital”) did not exist in North Carolina until the fifth decade of the nineteenth century.

One would guess that North Carolina’s first hospital might have been built in a large metropolis, such as Raleigh or Charlotte. In fact, Dorothea Dix opened its doors to patients in Raleigh in 1856. Charlotte Memorial Hospital first transferred patients from a building originally used as a military academy in 1878.

Surprisingly, the first designated hospital in North Carolina was built in 1846-1847 in what is now a ghost town; Portsmouth, on Portsmouth Island, adjacent to Ocracoke Island and Ocracoke Inlet.

In its hey day, the 1850s, a population of almost 700 and an active commerce flourished there. Thereafter, the population declined. In 1958 Portsmouth claimed only three residents, and by 1972 there was none. Now two dozen empty buildings, maintained by the National Park Service, stare out at Pamlico Sound and Ocracoke Inlet. They seem to be waiting for someone to come home. All that remains of the hospital is a brick cistern and a fragmented fireplace foundation.

It is instructive to visit this bleak island and reflect on humble beginnings (and endings). Inaccessible now except by privately-owned boat or aircraft [the grass airstrip has since been closed], Portsmouth possesses all the eerie beauty one could wish for in a ghost town; roads that are dark tunnels meandering through sighing cedars, and crumbling cemeteries with scary old-fashioned markers leaning wearily in the sandy loam. And silence.

Portsmouth was contrived by the colonial government in 1753 to fill a crucial need in North Carolina: facilitation of the practice of “lightering.” Bound as the state is by the Outer Banks, which are cut by treacherous, changing inlets, maritime shipping had from the beginning avoided North Carolina’s harbors for Charleston and deeper Chesapeake ports.  Ocean-going ships drew too much water to manage the systems of bars, swashes, shoals, and sounds. Ships fit for commerce within the sounds were too small for trans-oceanic work. The best solution at the time was to “lighter” (lighten) large ships arriving from Europe, New England, and the West Indies. Near the inlets, portions of the cargoes were transferred to smaller ships, “coasters,” which could then be distributed to interior towns.

Thus lightened and therefore drawing less water, the larger ships could enter the inlets to lie at anchor in the relative protection of the islands, take on provisions, give crews shore leave, etc. This business, cumbersome, labor-intensive, and dangerous as it was, actually worked. Reliable observers of the early 1800s described seeing as many as “30 to 60 sail of ship” in the roadsteads around Portsmouth at one time.

Lightering required locals to pilot the ships in and out of the inlets, hands to assist with cargo transfer, wharves, warehouses, and other storage facilities, and all the ancillary furniture of a busy port town- which soon appeared at Portsmouth.

The lightering and coasting trade brought another element to this busy, lucrative scene; sick seamen. They came from abroad, as well as from interior towns, with scurvy, smallpox, dysentery, fractures, infected wounds, venereal disease, insanity, yellow fever, ague, and miasmas. (They rarely lived long enough to have strokes, heart attacks, and cancer.)

Being unfit for duty (many posed potential quarantine problems for their ships at the next port of call), these sick sailors were “dumped” on the island more or less to fend for themselves. Generally poor, filthy, and graceless, they made a sorry sight and were a major problem for the islanders. Care, such as it was for these wretches, was provided in homes, haphazardly. There was no physician within 40 miles of Portsmouth until 1828.

Congress, following a British practice, established a system providing “Relief for Sick and Disabled Seamen” by an act of July 16, 1798, signed into law by President John Adams. This was, in reality, a compulsory, payroll deduction, health insurance scheme.

Under the plan, $20 was deducted by the ships’ masters from the monthly pay of each seaman (“hospital money”), and paid to the Collector of Customs at each port of entry. The collector, in turn, disbursed the funds, procuring for sick and disabled seamen, “relief,” in the form of medical care, nursing, medicines, lodging, and board, such as might be available locally.

Ocracoke was made a port of entry in 1806. James Taylor was appointed the first collector. The collectors at Ocracoke, many of whom resided at Portsmouth, managed the medical care of seamen in these two towns.

As one might imagine, this system was not a great improvement on the old- with two exceptions. First, the locals who assisted beneficiaries of the fund were rewarded for their trouble. Second, in 1828, collector Joshua Taylor was able to attract a physician to Portsmouth, Dr. John W. Potts, who signed a contract to be hospital physician for an annual salary of $1,500.

At the time, the island’s population was about 300. The pickings being lean, Dr. Potts quickly saw that maintaining a hospital at this remote location, even with a private practice on the side, was a grim proposition. He subcontracted with Dr. Samuel Dudley the next year.

There followed a series of physicians working out of a small, rented, two-room dwelling in the most primitive circumstances. With high tides and storms, sea water flowed over the floors of the “hospital.” Drinking water, described as “brackish and bitter,” was obtained from a shallow hole dug in the sand.

Everyone could see this was an intolerable situation. The lightering business kept building, and the sick and disabled seamen kept coming.

The Hospital at Portsmouth

Aware that marine hospitals had been built in Norfolk, Boston, Charleston and Mobile, the collectors and other prominent citizens barraged a succession of Secretaries of the Treasury and other officials for a real hospital at Portsmouth. Enthusiastic supporters envisaged a facility that could be a referral center.

At one point the collector complained that he had 17 seriously ill seamen whom he has to put up in a rough boathouse. Finally, an 1842 act of Congress appropriated $8,500 to build a hospital. A lengthy process of legal contortions over title to the land, planning, bidding, contracting, inspecting, and provisioning delayed opening of the hospital until 1847.

This was a very substantial two-story structure, built on piers, with a fireplace in each room, primitive running water, spacious “piazzas” (porches), and separate quarters for the hospital physician, and at times, a “medical student.” Two plans submitted during the bidding for this structure were recently found in the letters from the Collectors of Customs to the Secretary of the Treasury at the National Archives.

Floor Plan of Hospital Rooms (Note fireplace in each room): 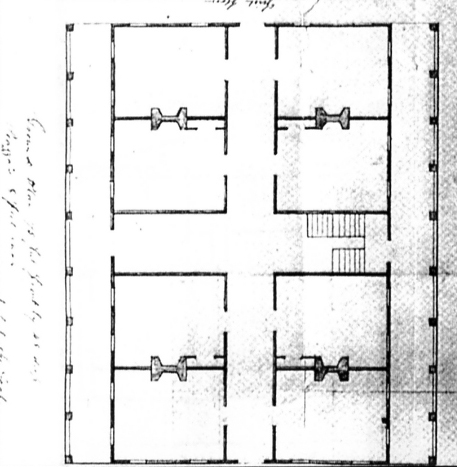 The hospital had a brief existence- as a hospital. The practice of lightering peaked about the time the hospital doors opened. With the arrival of rail service and other improvements at more traditional deep-water ports, such as Wilmington and Beaufort, the lightering business at Ocracoke Inlet began to fall off, never to recover.

During the 1850s a varied, but steadily dwindling, patient population sought relief at the United States Marine Hospital at Portsmouth. At times during the last half of the decade, the beds were empty. The expense of maintaining such a facility at this remote and meteorologically hostile site became apparent to Congress, and plans were started to construct North Carolina’s “main” marine hospital at Wilmington. The Civil War put an end to both endeavors.

During the Civil War, Confederate forces occupied the Outer Banks but were easily dislodged by Federals in August 1861. Most Portsmouth Island residents fled to interior towns; less than half returned after the war.

Except for fishing, subsistence farming, and active involvement in the U.S. Lifesaving Service after 1874, the economy continued to dwindle. The hospital building, never used as a hospital after the war and abandoned by the federal government by 1872, was put to a variety of uses- among them dance hall, weather station, and telegraph station.

The building burned in 1894. All that is left of the hospital is the cistern. Following a practice which is still used by many Outer Banks residents, rainwater was collected from the roofs by gutters and carried through downspouts to large tanks for storage. The hospital’s original wooden cistern quickly showed an annoying tendency to leak and by 1852 had rotted irreversibly.

After the usual series of pleas, bids, contracts, deals, and inspections, a fine brick/masonry cistern was built in 1853 for $150. This structure, about nine feet in diameter, stands a few yards southwest of the lifesaving station. Presently impounding a few gallons of green slime and countless million mosquito larvae; it once contained “the sweetest water” on the island. Nearby, in the sand, are fragments of brick work, probably one of the hospital’s fireplace footings.

With the addition of the National Institutes of Health, the U.S.P.H.S. grew to the multi-billion dollar agency we know today. The crumbling remains of one of the first U.S. Marine hospitals and of North Carolina’s first hospital stand in mysteriously beautiful Portsmouth Village; a silent witness to the humble origins of great health care systems of the state and  nation.