Following is an article written by Alice K. Rondthaler about one of Ocracoke’s first July 4th parades. It was published July 6, 1953. (Accompanying photos are from the Mary Ruth Dickson Collection, courtesy of the Ocracoke Preservation Society, with the exception of “Miss Ocracoke & Miss Portsmouth,” courtesy Chip Stevens Collection.)
———————————————————————————-

Ocracoke Island residents will long remember July 4, 1953 because of the  wonderful home-town celebration on that day. Historically the Celebration might have been in honor of the 200th anniversary of the appointment of a town here, since the Colonial Assembly passed an Act in 1753 making both Ocracoke and its neighbor, Portsmouth, towns.

And the history of the Island goes further back than that, for the Colonial Legislature of 1715 had purchased land on the Island for the maintenance of pilots who had settled here. And, going still further back, historical records indicate that on June 23, 1585, one of the Raleigh Expeditions en route to Roanoke Island, made its first landfall here.

But actually the July 4th, 1953 celebration had no designs on perpetuating history; it was just a grand, home-town affair, first suggested last April by Marvin Howard, native of the Island, happily retired here after years of service with the U. S. Army Engineeers — a man who believes that everyone likes to have a good time now and then. 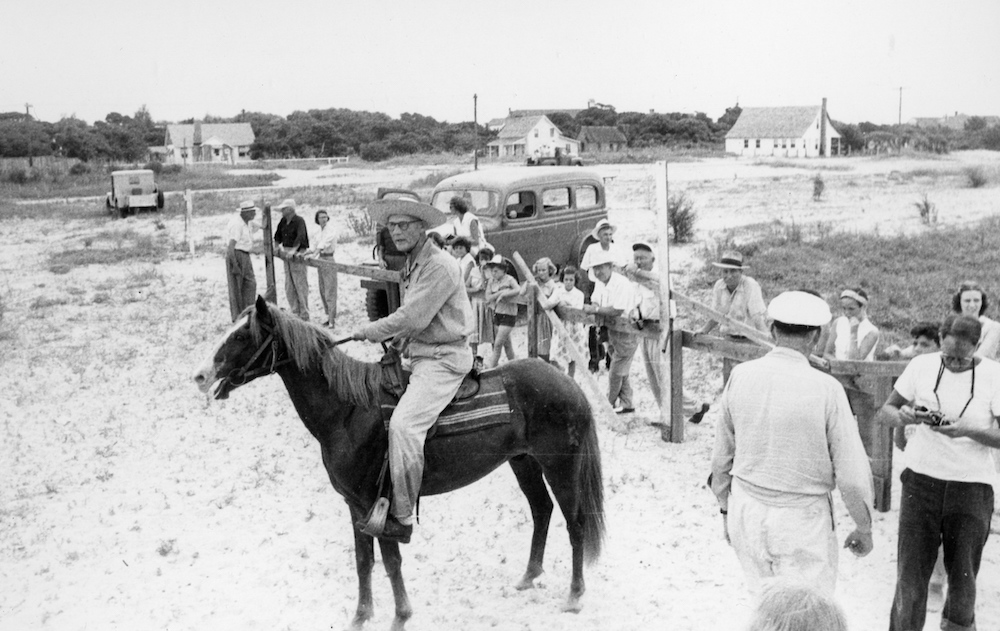 Marvin Howard astride one of the Banker Ponies:

Of course Pony Penning is an annual event on the Fourth, and Capt. Howard was particularly interested in this because his father, Homer Howard, was one of Ocracoke’s famous horsemen in the old days. And to follow the old-time custom, the Pony Penning this year was on the harbor shore directly west of Silver Lake Inn, and the ponies were started at daybreak from the northern end of the Island down the east shore to the Coast Guard Station point. In the old days before the harbor shore was lined with docks and buildings the ponies came right along the shore, but this year they were driven straight down Ocracoke’s paved road which borders the Harbor. It was a stirring sight to watch the herd of galloping ponies round the road into the corral —- not a pony lost at the entrance corral. 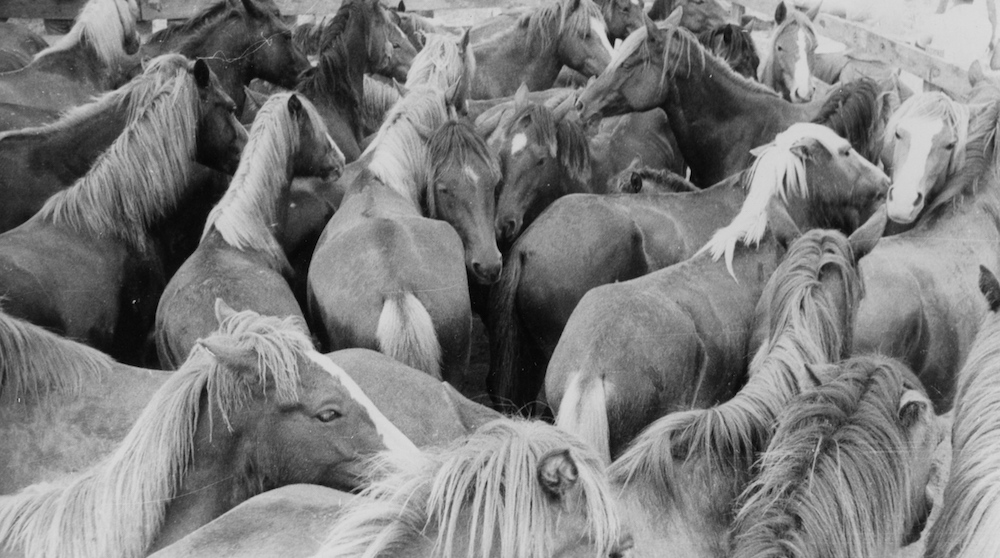 Ponies Corralled at the Pony Penning:

A small fleet of visiting yachts in the harbor had natural grandstand seats for the event. After that, the usual branding, selling, and releasing ran on through the day. Crowned Queen of the Pony Penning was aging Jane Bryant, respected wife and mother of the town’s only colored family.

Next event of the day was the patriotic service at the local school with an inspiring Flag Raising, military style, by the local Coast Guard contingent. 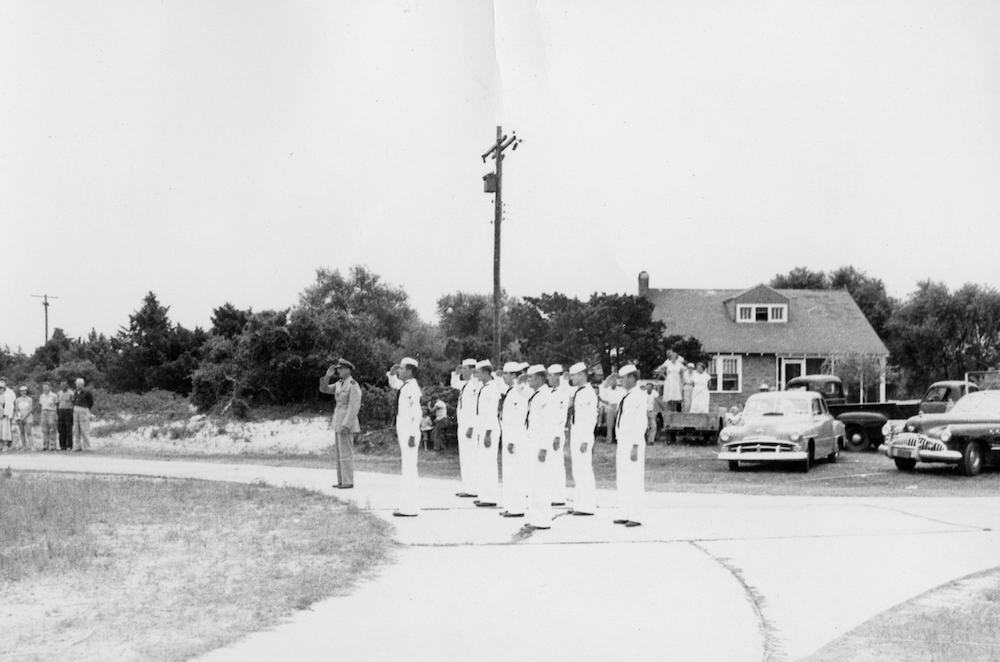 At noon the women of the Methodist Church served a ham-beans-salad dinner in the Church Recreation Hall. And immediately after dinner everyone hurried home to get ready for the Big Parade — many to be in it; others to watch it. Twenty trucks, or cars gaily decorated, a dozen horsemen, 35 costumed youngsters, a half dozen majorettes, and a dozen bicyclists formed a procession a quarter mile long, fllying  banners, penants, signs and ribbons. Horns honked, kids tootled and kazooed, clowns monkeyed, and majorettes strutted. Many an ancient jalopy showed off a brand new red, white, and blue coat of paint and sailed its
flagpoles high in the air. Brightly dyed feed-sack costumes, all home-made, brought laughter for the watching crowd which lined the lanes along the way, pointing, laughing and admiring. Floats, all home-made, rolled by gaily, wholly unfettered by commercialism or expensiveness, but showing (so visitors said) more natural charm and ingenuity than appears in many a small city affair. 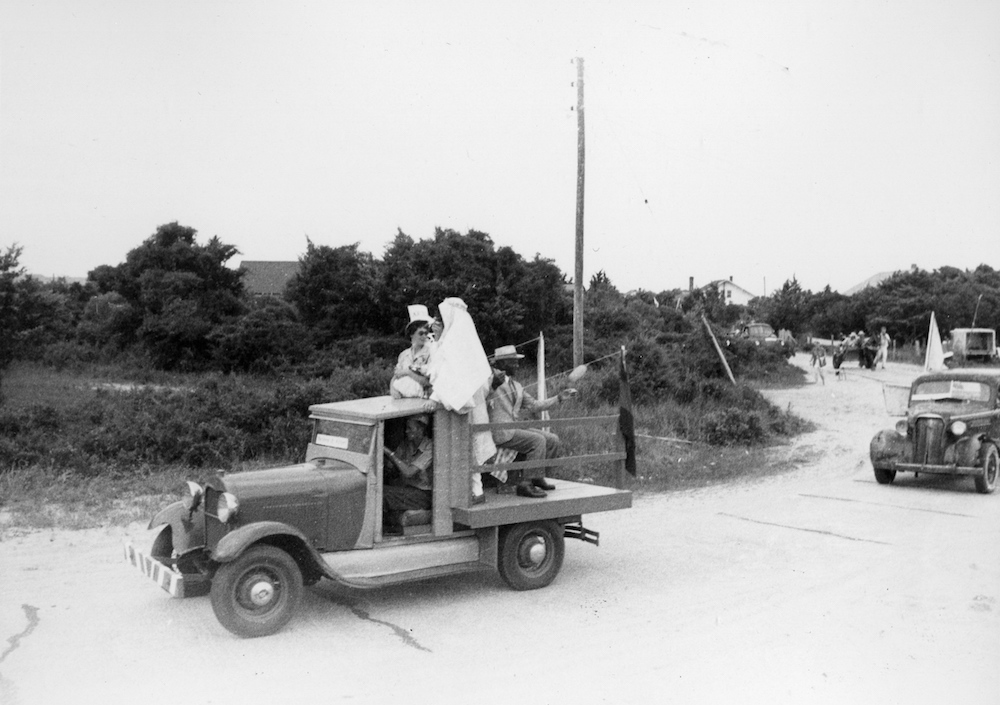 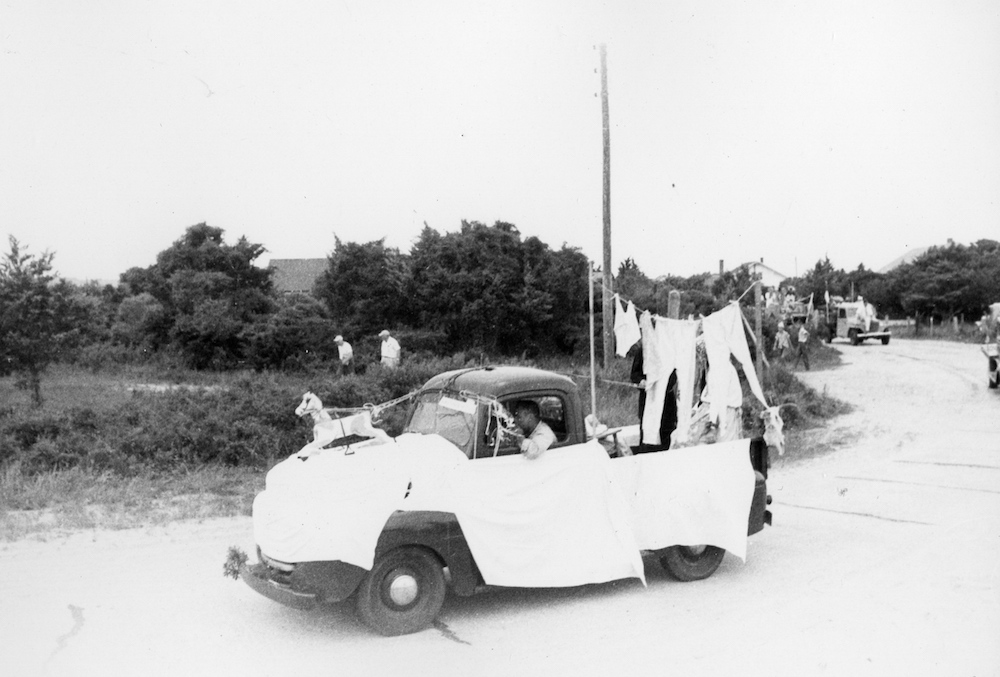 Laundry Hanging Out to Dry: 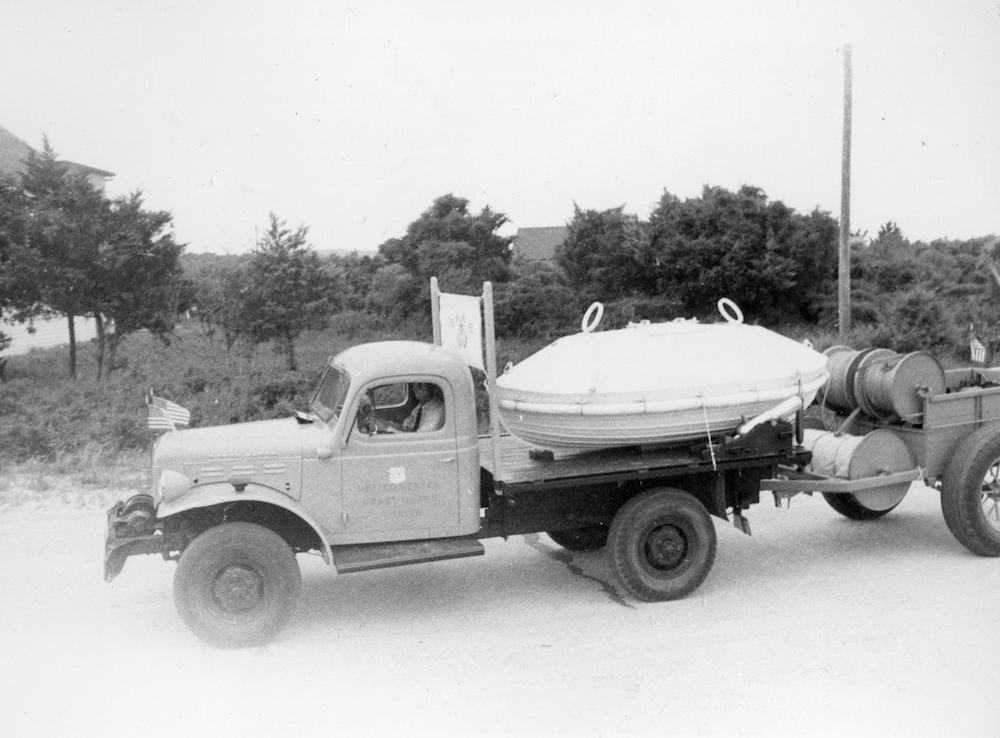 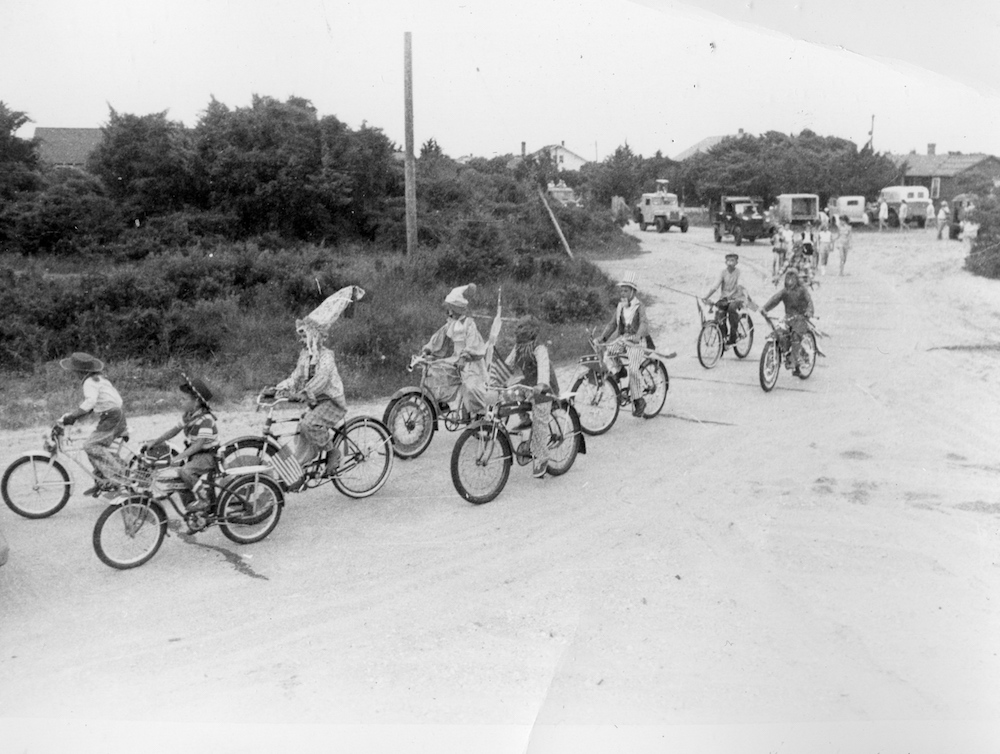 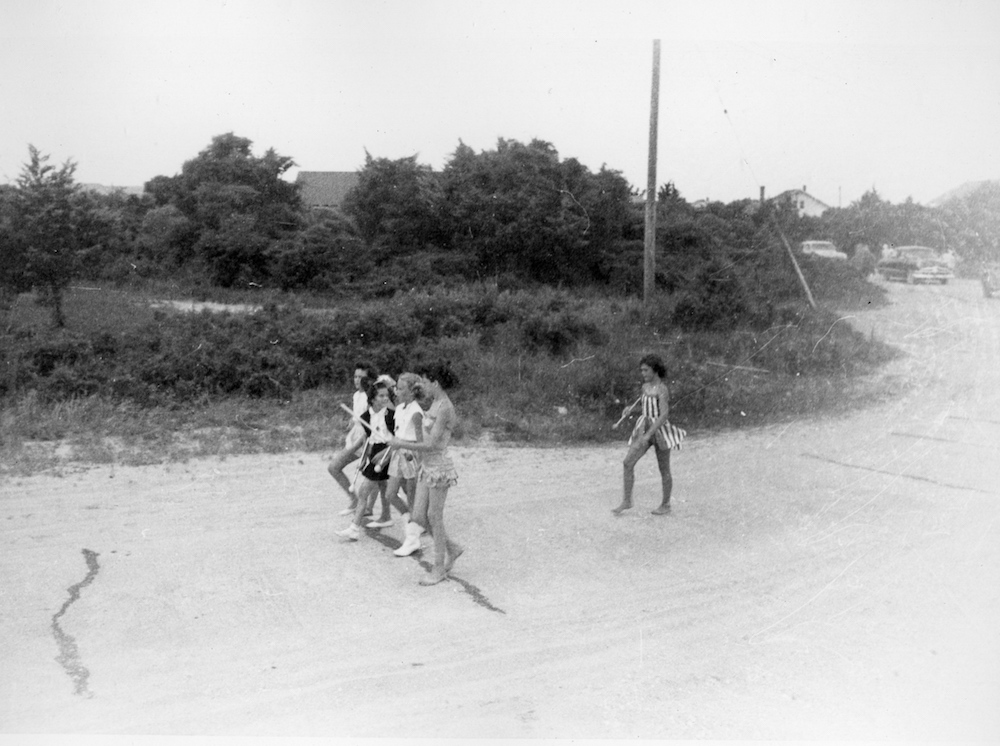 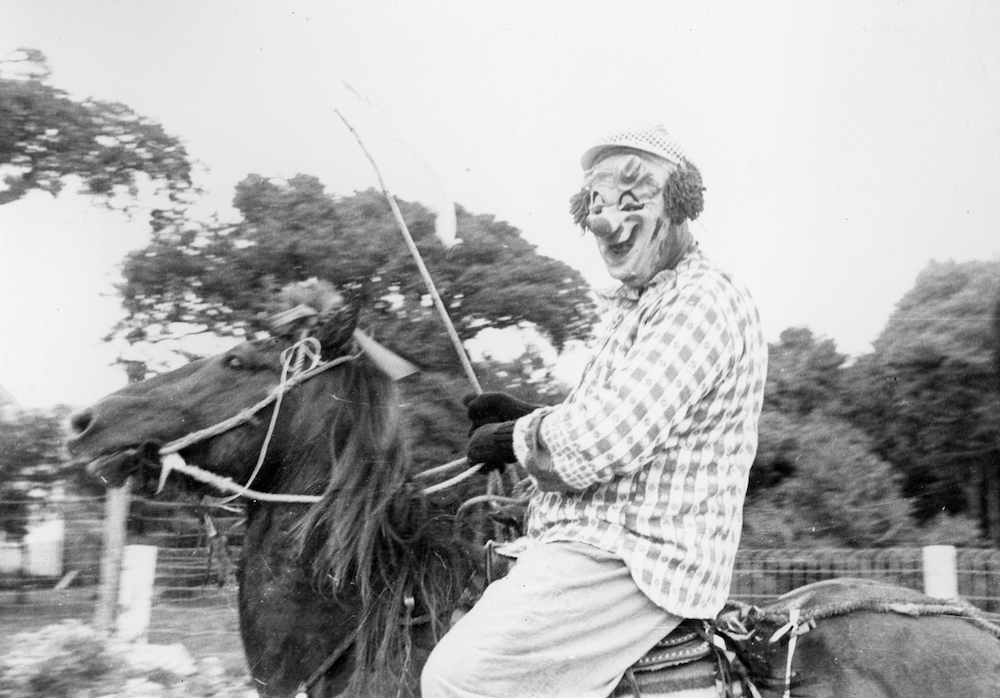 Leading the procession on horseback were Marvin Howard and Lum Gaskill, Jr., dressed in gay clown costumes of feed-sack material. 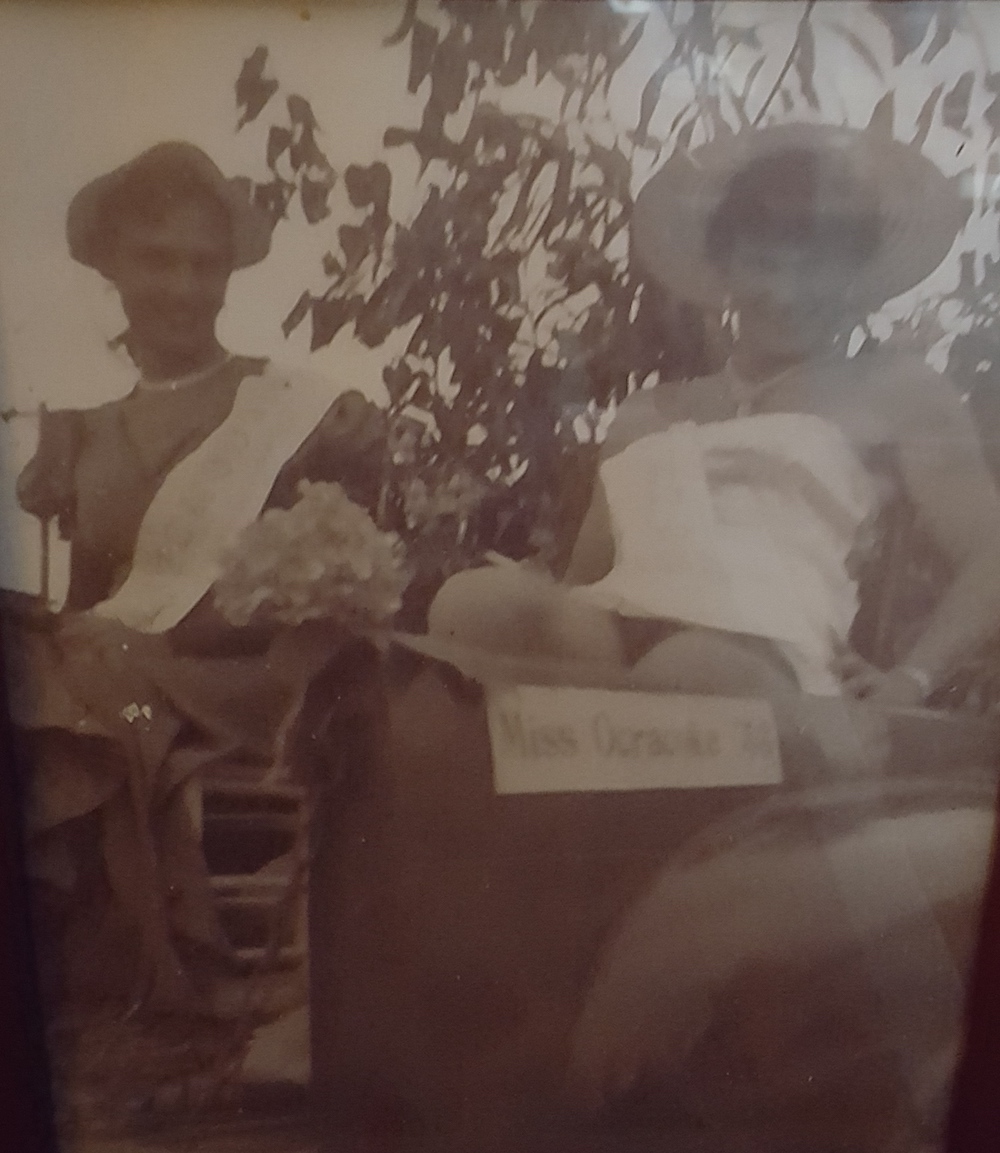 Second Prize went to young Billy Wahab Taylor, who was costumed as Uncle Sam. Prize for the “prettiest” truck went to the Ocracoke Electric Corporation, which was loaded with gaily dressed little children who won the award for it. 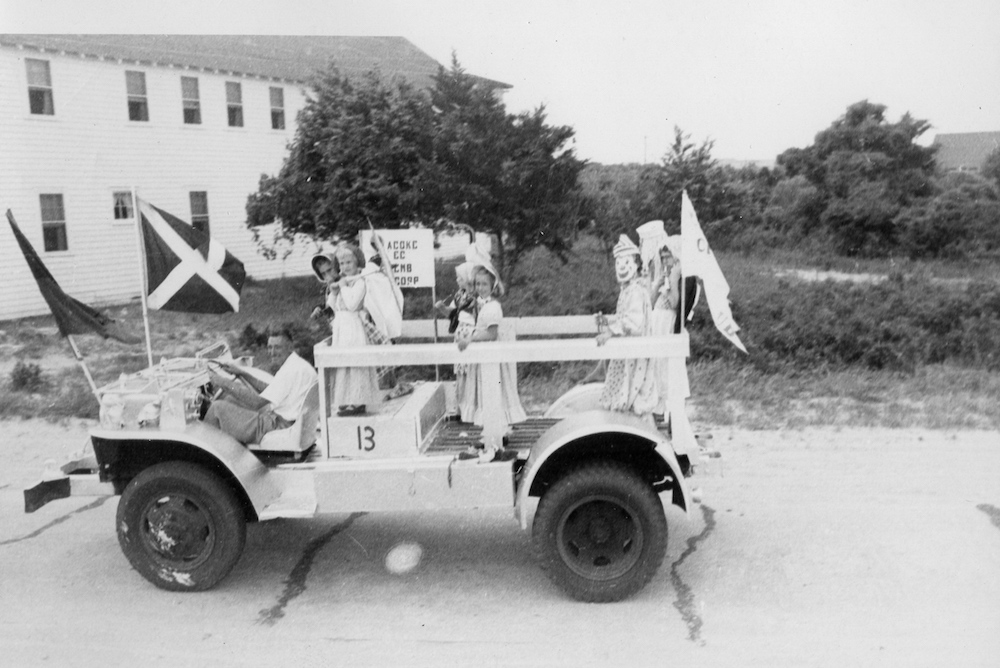 Prize for the most realistic” went to “Blackbeard the Pirate” with his “Favorite Wife, Mr. Eph Esham and several other wives who rode the float with him. 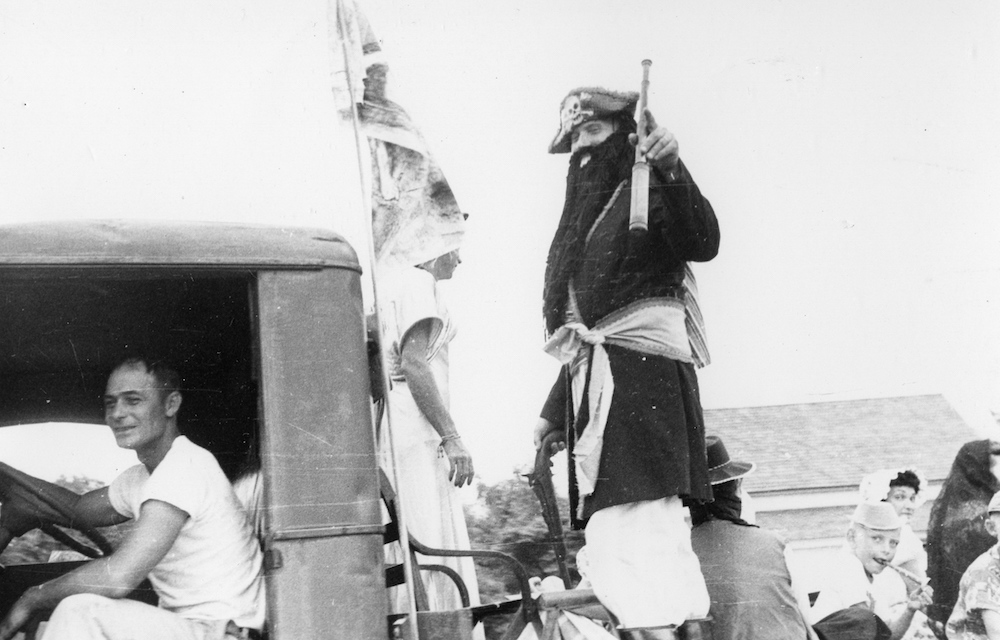 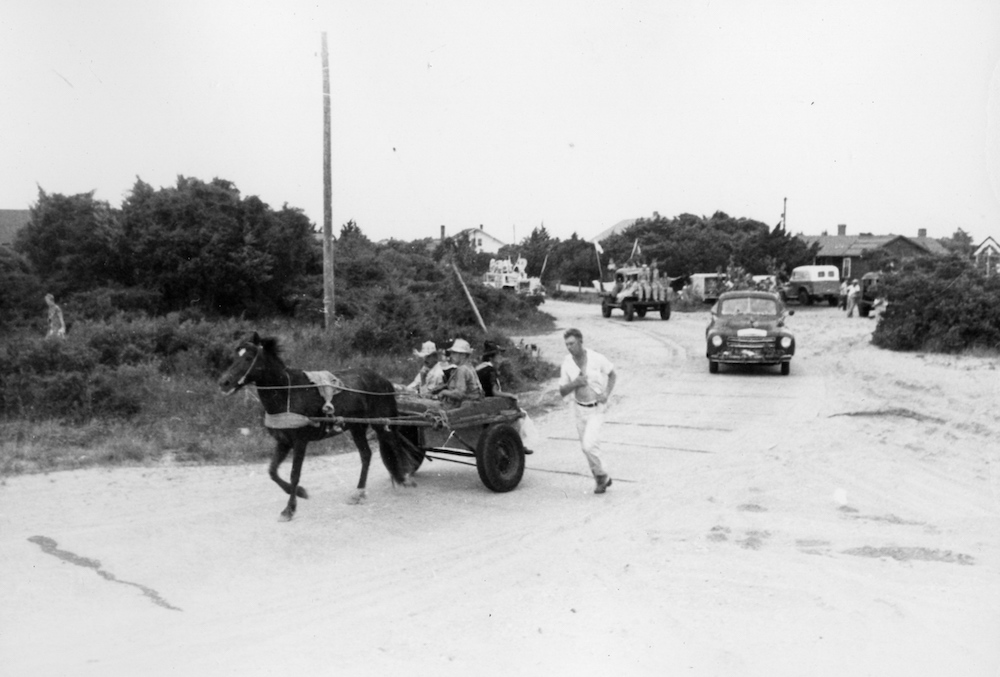 Harold Wahab and his Pony Cart:

Prize for “best use of local materials” went to Thad Gaskins, whose gaily painted  Ford  truck was filled with baskets of cabbage, tomatoes, and other home-grown vegetables. 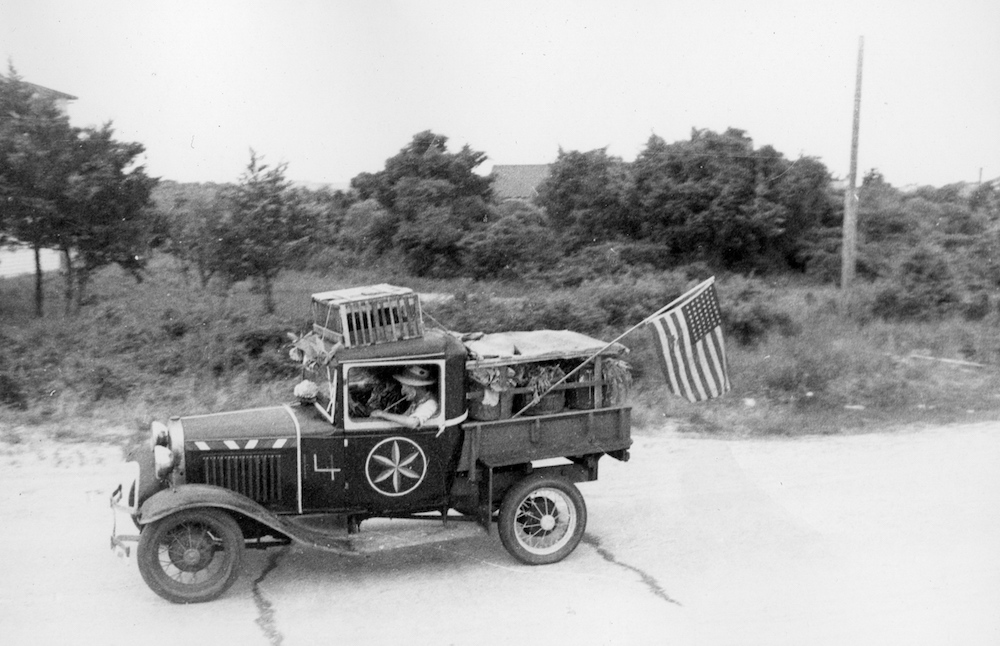 Thad Gaskins and his Veggies:

Other trucks or floats were “The Quilting Party,”  “California or Bust” (with Albert  Styron,  Jr. attired  in a slat-bonnet), [and] the “Ocracoke Hunter” (with Wilbur Gaskill shooting from a duck blind). 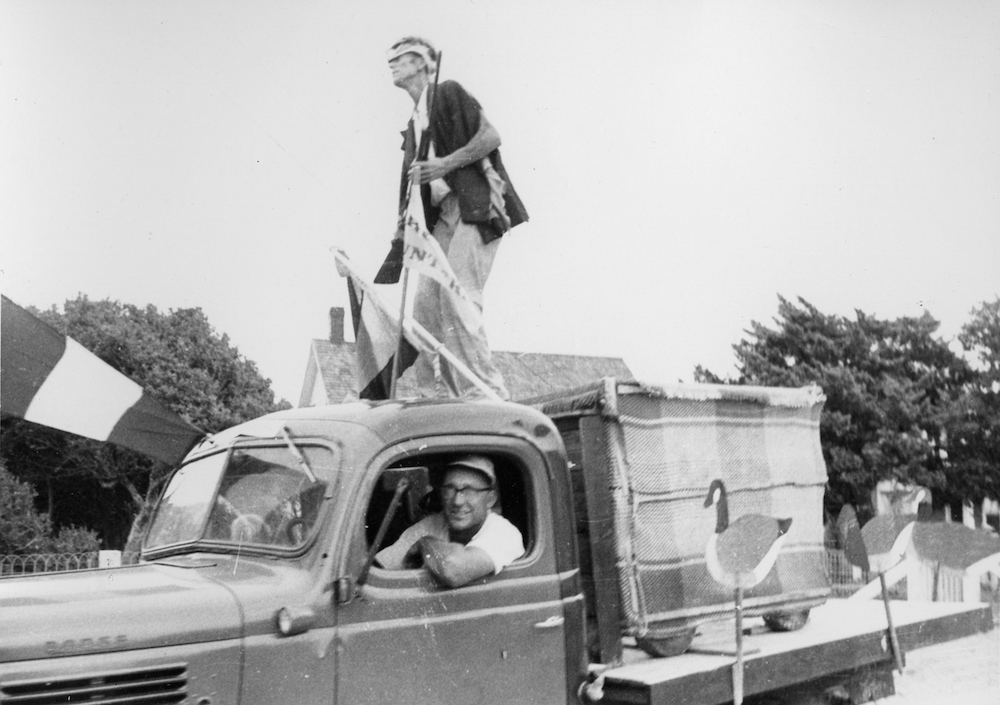 [Along came] the “Fishing Guide” (with Rob Tolson and his little boat). 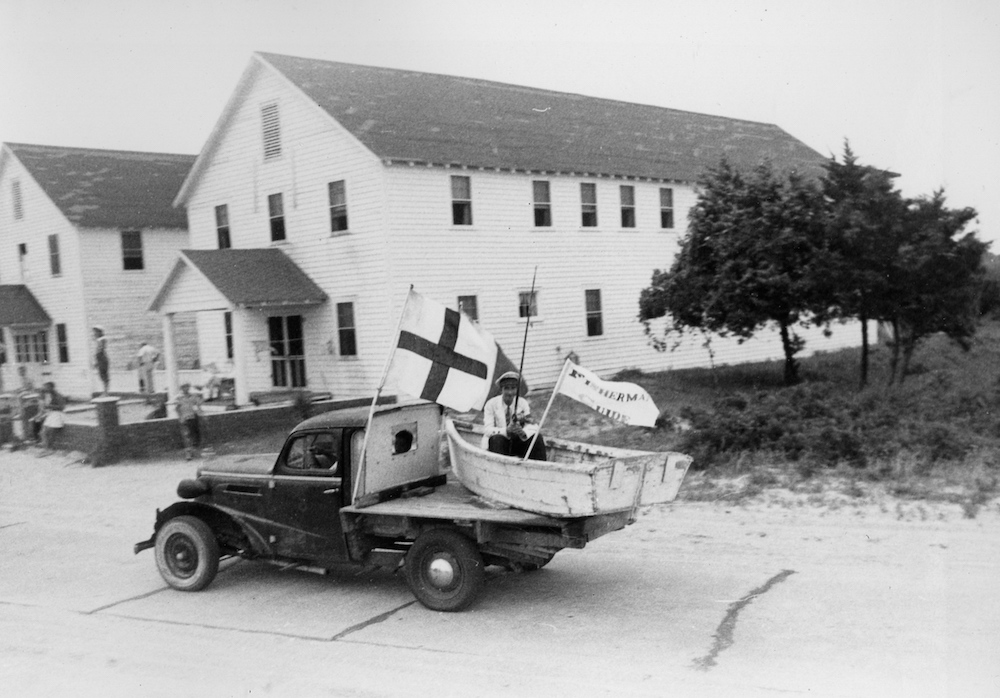 [Also joinging the merriment were] the “Graveyard Band” (featuring Monford Garrish, Ben Spencer, Roy Parsons and others with guitars and kazoos), and the “Woccocon” (early  Indian name for the Island) Indians, featuring Larry Williams, Blanche Howard, Calvin O’Neal, Jr., and others. 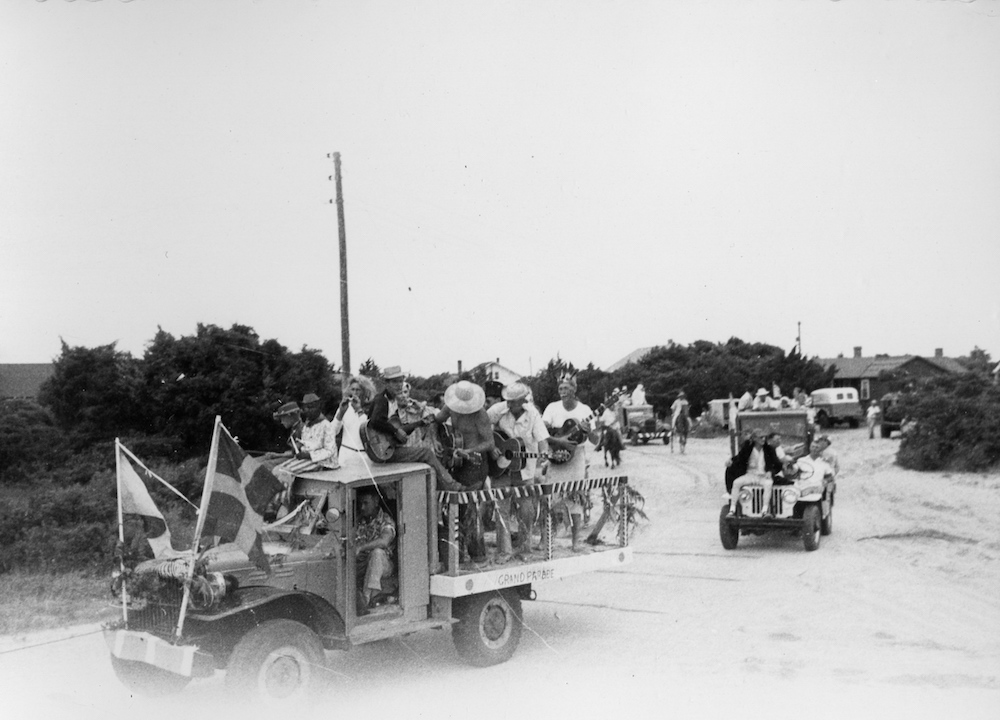 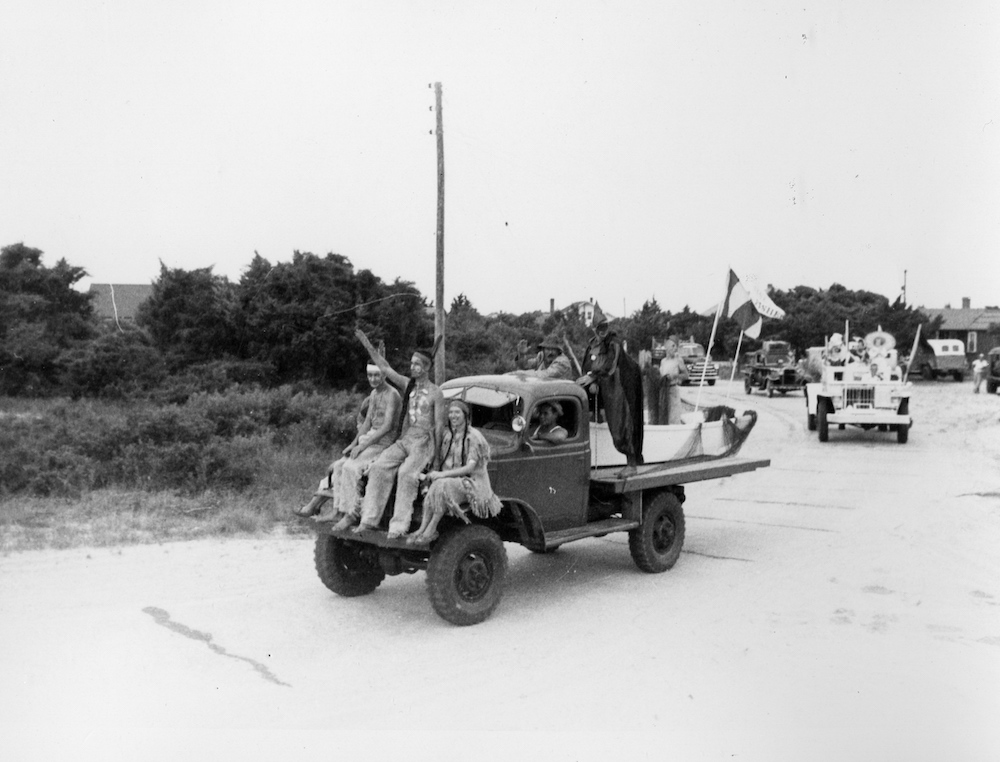 In addition to prizes for the outstanding floats, each driver received a box of shot gun shells for his part in the expedition. And there were many individual prizes given. Sam Keach Williams got first prize for the best home-made chicken-feed sack costume; Albert Styron, Jr., for second-best. Lum Gaskill, Jr., Zora Babel Gaskins [and] Ikey O’Neal were recognized for horsemanship. Two prizes went to Belinda Styron and Betsy Carol Styron for excellence in singing. Betty Helen Howard won first prize of the majorettes, Henrietta Peele, second prize; Ellen Marie Fulcher first prize as the prettiest, Connie Sue Styron, second prize; Martha Garrish and John Ivey O’Neal, and Betsy Q’Neal, for the  best children’s chicken-feed costumes; Lindsay Howard for best clown: Lorraine Howard, Edward O’Neal, David and Ann Esham, Yevette Austin for Mother Goose costumes; a group of Devils were awarded    prizes for being the “ugliest,” and many of the bicyclists won awards.

The day ended  with the movie “Blackbeard the Pirate” at the local theatre, after which in gay  mood 250 people jammed the school recreation hall for dancing and square dancing until  midnight. Congressman Herbert C. Bonner was over for the occasion on one of the Washington, N. C, yachts; other yachts were in from Norfolk. Everyone had a very happy day, and talk about town now and for some time to come will be about the Big Parade.