Ocracoke’s 75′ tall white tower with a steady beacon is the island’s most prominent landmark. Built in 1823 by Noah Porter of Massachusetts for $11,359.35 (this included the keeper’s quarters), the Ocracoke lighthouse is actually the third structure to guide mariners through the often treacherous Ocracoke Inlet.

In 1715 the North Carolina colonial assembly passed an act to settle and maintain pilots at Ocracoke Inlet. Knowledgeable local pilots familiar with the shallow Pamlico Sound and the ever-shifting channels, shoals, and sandbars, were necessary to protect shipping interests to and from mainland North Carolina ports.

In 1789 the North Carolina General Assembly, recognizing that even more needed to be done to help insure mariners’ safety, passed an act to erect a lighthouse on Ocracoke Island.

Because of the concerns of local pilots and merchants, as well as owners and captains of vessels that used Ocracoke Inlet, the lighthouse was, instead, built on nearby Shell Castle Rock, just inside Ocracoke Inlet. This relatively stable 25 acre island of oyster shells was developed in 1789 by John Blount and John Wallace. At one time as many as 40 people lived and worked there, among docks, warehouses, a grist mill, at least one small store, modest homes, and even a windmill.

Congress authorized this first beacon in 1794, and it was completed and illuminated in 1798. The lighthouse was a 55′ wooden, pyramid-shaped tower covered with cedar shingles, and mounted on a substantial stone foundation. Atop the tower was a six-foot lantern and a three-foot dome. The builder of this lighthouse was Henry Dearborn, who also built the first Cape Hatteras Lighthouse. Light was provided by one large whale oil lamp with four wicks.

The lighthouse is shown on an 1805-1810 pitcher (on display at the NC Museum of History in Raleigh) bearing an image of Shell Castle.  This is the earliest known image of a North Carolina lighthouse, and the only surviving depiction of this 1798 beacon and the business complex on Shell Castle Island.  Photographs of the pitcher can be seen here.

Almost immediately after it was completed, however, the Shell Castle light was made ineffective for navigation due to the ever-changing channels and shoals. By 1806 the channel had moved so far that the lighthouse was almost totally useless. Construction of a new tower was authorized.  On August 16, 1818 lightning claimed the original structure and the keeper’s quarters before a new one could be built.

Not quite two years later, on May 15, 1820, funds were appropriated to station a light ship in Ocracoke Inlet. This proved inadequate for its purposes, and after two more years $20,000.00 was approved for the construction of the present Ocracoke lighthouse. Jacob Gaskill, Justice of the Peace, sold the 2 acre parcel of land for the lighthouse to the government for fifty dollars.

When first built, the lighthouse utilized a system of silvered reflectors to magnify the flame from a whale oil lamp. In 1854 a newly introduced Fresnel lens replaced the old system. Augustin Fresnel, a frenchman, had invented a marvelous array of hand-cut glass prisms and bulls-eye lenses in 1822. The new lens magnified and intensified the light so that it was now equal to 8,000 candlepower and was visible 14 miles to sea.  Later the oil lamp was replaced by a 100 watt incandescent bulb.

According to island native, Ellen Marie Cloud, no one seems to know who the first of Ocracoke’s lighthouse keepers were. Records do not begin until 1847. Keepers were appointed regularly until 1946 when the light was fully automated.

Ocracoke Lighthouse after a Snowstorm: 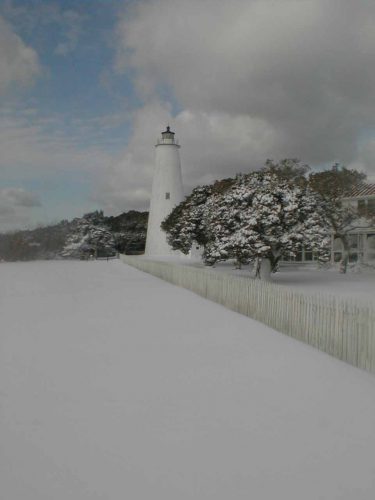 Thanks to Ranger Gail Fox, the base of the Ocracoke lighthouse will be open to the public this summer on Tuesdays, Wednesdays and Thursdays, from 1 pm to 4 pm.

Inside View of Lighthouse from Ground Level:

Because of the narrow, nearly vertical ladder that leads into the lantern; the small confined space around the light and lens; the fragile brick walls and spiral staircase; as well as other architectural features, the lighthouse is not open to the public for climbing.

For more information about the Ocracoke Lighthouse see the following references: