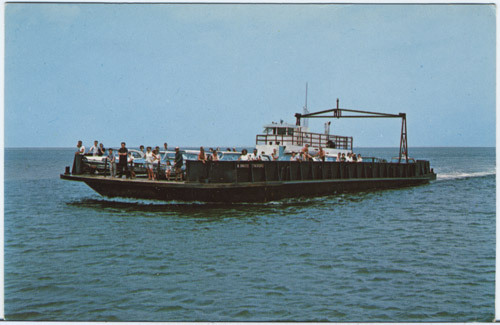 As many of our readers know, Ocracoke citizens have been sparring with the North Carolina legislature for more than two years regarding ferry tolls. Some members of the legislature were trying to force the Ferry Division of the NC Department of Transportation to generate an additional $5,000,000 by raising tolls on existing routes, and instituting tolls on currently free routes, including the Hatteras Inlet run.

Many citizens contacted their representatives explaining why ferry tolls are detrimental to the economy of North Carolina, and unfair to the state’s coastal citizens.

This is a transcript of my letter thanking legislators who opposed ferry tolls:

“Many thanks for your support of toll-free ferry service in North Carolina.

“During the early days of our country, numerous roads, highways, bridges, and ferries were tolled. Citizens and legislators eventually realized that tolls were inconvenient, inefficient, unfair, and hampered economic development. They decided to establish a state-wide network of roads, and a transportation infrastructure, supported by public funds for the benefit of all. North Carolina became know as the “Good Roads State.”

“I live on Ocracoke Island, and my gasoline taxes help pay for snow removal, repairs, rockslide clearance, and other services on many North Carolina highways that I only use occasionally.

“Ocracoke is often called the “Pearl of the Outer Banks.” This island is a popular tourist destination, and visitors to Ocracoke and the Outer Banks provide much income to the state of North Carolina through sales and use taxes, and by contributing to the economic support of tax-paying North Carolina citizens. We year-around residents rely on our ferries for access to essential services.

“Again, thank you for your support, and please continue to work to make North Carolina a state that welcomes visitors, and treats all of its citizens fairly by providing toll-free access to our coastal communities.” 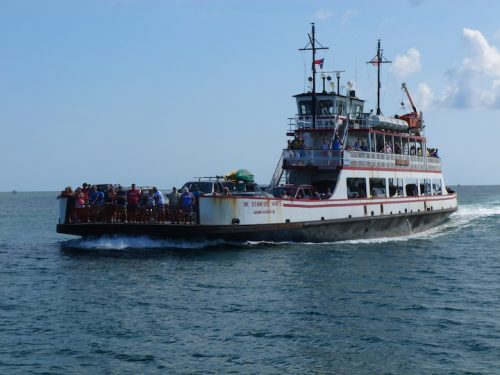 The efforts of citizens and concerned legislators were successful, as indicated by this July 22, 2013 press release (http://www.hydecountync.gov/news_and_information/no_new_ferry_tolls_for_fy_2013-2014.php) from the government of Hyde County:

“No ferry tolls will be imposed on the Ocracoke/Hatteras ferry.

“No new tolls will be imposed on any ferries for the fiscal year 2013-2014. Cedar Island and Swan Quarter and other existing ferry tolls will not be removed.  Congratulations to everyone who voiced opposition to new ferry tolls.

“Our legislators worked diligently to protect our basic transportation needs.  Senator Bill Cook and Rep. Paul Tine joined forces with Appropriations Subcommittee on Transportation Chairman John Torbett, Rep. Charles Jeter, Rep. Frank Iler, and other legislators to fight for us. Please thank them for their endurance in the legislative process. They fought for us and prevailed.”

On the same date Bruce Siceloff, on the Raleigh News & Observer web site (http://www.newsobserver.com/2013/07/22/3048842/nc-budget-gives-locals-a-veto.html), provided more information about the fate of ferry tolls in North Carolina:

“Unable to settle a two-year argument over competing proposals to make travelers start paying for trips on ferry routes that have always been toll-free, state legislators have decided to let somebody else decide.

“The new state budget rolled out by House and Senate leaders this week would give unusual veto power to local elected leaders on rural transportation planning boards in coastal areas served by North Carolina’s four toll-free ferries. It gives new clout to mayors and county commissioners who loudly condemned the ferry tolls when they were proposed in 2011 and 2012.

“The state Department of Transportation would not be allowed to start collecting tolls on those routes unless it was formally asked to do so by multi-county rural planning organization boards, which work with DOT to set transportation priorities in coastal counties.”

Below is a photo of the mail truck disembarking from Frazier Peele’s private Hatteras Inlet ferry about 1953: 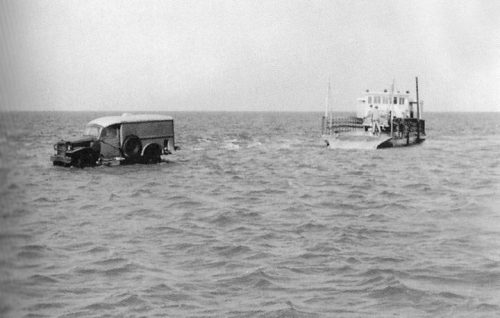 “This is a day and age past the time when there is excuse that one section or community of the state should be heavily penalized before access to neighboring communities and the state at large. To long permit any situation of this sort reduces the terminology to “rank discrimination.” Fortunately, in recent years there has been a marked eagerness of the State Highway authorities to do things to help the small communities. Here is an example where speedy action can render a great service where greatly needed.

“Capt. Frazier Peele of Hatteras has established an automobile ferry which crosses to Ocracoke Island on regular schedule about three times a day, and which goes at other times on call for an additional fee. The normal fee is $5 per car; the special trips cost $7. He has built a good new boat for this work, but soon it will be outgrown. The venture of Captain Peele has demonstrated its need. In this day and time the cost of a round trip to Ocracoke Island is exorbitant, when we consider that in addition to ferry fare, the motorist must travel some 16 miles of bare sands whereby the skimpy mileage made on a gallon of gas subjects him to paying three times the normal gas tax, plus much additional wear and tear on his car.

“The State can now come to the rescue of Ocracoke Island people at little expense by contracting with Capt. Peele and operating this ferry free of cost to the traveler, as it once did at Oregon Inlet. It could go further, and by stabilizing the road to Hatteras Point, the distance could be shortented (sic) by half, so that the water trip would take only half an hour instead of the present hour by water.

“The State could stake off the best of the road on Ocracoke Island whereby the stranger could more easily find his way down these barren sands. It ought not be a difficult task, if any group of public spirited citizens would take the time to convince the state of the justice of building a road on Ocracoke Island. The time is past, when the large population of this community should longer be subject to the inconvenience which today faces the people of Ocracoke and their visitors.

“We think it would be only a good neighbor gesture, if the officials and civic organizations of Dare County would join hands with the civic club and public spirited citizens of Ocracoke Island in seeking to bring about the deserved and needed improvements. So long as the present situation exists, it stands as a challenge to all worthy citizens to do something about it. So long as it exists it is a reflection on a state which makes broad appeals to tourists, and is bad advertising for a region whose principal sources of income is its growing tourist business.” 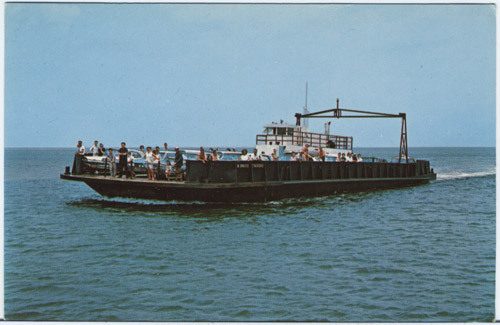 The text on the reverse side of the postcard reads,

“State owned and operated toll-free ferries operate during daylight hours between Ocracoke and Hatteras Islands on the North Carolina Outer Banks. Vacationists thus get a free voyage through historic waters.”