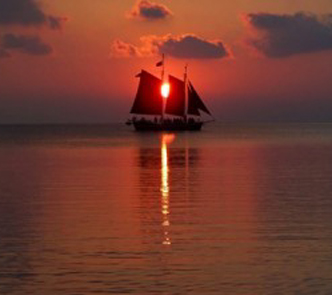 —-An old sea chantey traditionally sung at the completion of a voyage.
When I sailed the Windfall from her homeport of Ocracoke up to Scott’s Boatyard in Buxton on Easter Sunday with my son and a couple of friends for annual maintenance and a Coast Guard dry-dock inspection, I knew I was in for some costly repairs to a section of the hull which had deteriorated from fresh water intrusion, but that was not so unusual for an old boat constructed mostly of wood planking, along with plywood, epoxy and fiberglass. 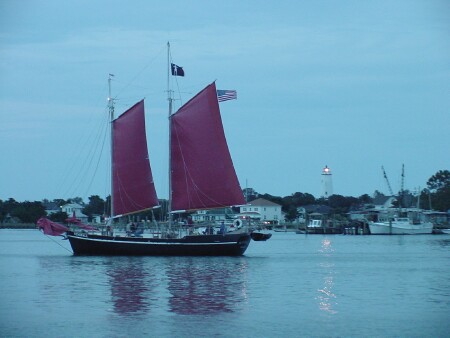 As the yard crew and I began to dig into the hull, it became apparent that a proper restoration would exceed the cost of a new vessel.  On Wednesday, April 7, I notified the Coast Guard that I planned to retire the Windfall and cancelled the scheduled inspection.  By the following week, I was in New Jersey looking at another schooner that may soon become Windfall II.

Some folks have expressed surprise at the alacrity of these events, but those who know me best were not surprised in the least.

Sailors have always imputed varying degrees of human consciousness to their boats.  The fact that boats are usually referred to in the feminine gender is evidence of a prevailing affection felt toward them. But, love them as we might, we guys can never be sure we understand our women. And, strangely enough, that’s a big part of what makes them fascinating to us.

With Windfall, I guess I always wondered which of us would survive the other.  If she’d held on six more months, we would have been together a quarter of a century! 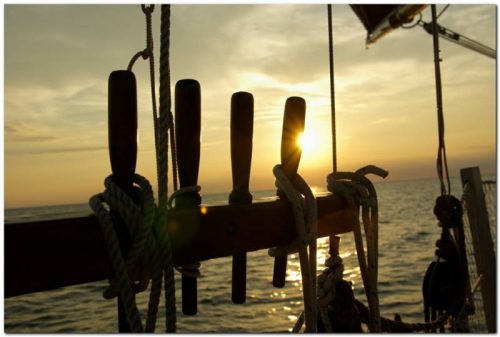 And I must confess (rascal that I am!) that, suspecting that this time might come, I’ve sort of had my eye on another shapely creature. Couldn’t help but admire the “cut of her jib” as they say.  I’m sure my uncle Pem, who (inadvertently) taught me to sail long ago, is rolling in his grave.  He wasn’t a schooner nut like I am but he was a devotee of wooden vessels.  I remember a placard on the saloon bulkhead of his Dickerson ketch that said, “If God had meant for us to sail fiberglass boats, He would have given us fiberglass trees.”

Windfall II, although somewhat smaller and constructed of fiberglass, will (from a distance at least) look very similar to her namesake. Instead of 30 passengers, she’ll only be approved for six, but I’m not getting any younger myself and could use a change. The smaller capacity will require a price increase, but I don’t want to do that without adding value so I’ll be offering longer cruises where we can really do some sailing.

Of course, we’ll grieve for the old girl. In nearly 25 years of service, Windfall carried tens of thousands of passengers from all over the globe without a single accident. And she sure didn’t owe me anything.

For years, people who understand business (and especially the charter business) asked me why I didn’t sell her at the top of her game and buy a newer/bigger/better boat. From a business standpoint it only would have made sense.

But the fact is: I loved her. Every time I took the wheel of someone else’s boat, it only made me appreciate how much I enjoyed sailing that schooner.

Old gaff-rigged schooners are no longer considered competitive performers. That’s why the annual Great Chesapeake Bay Schooner Race is strictly limited to the schooner rig.  In 2008, five of us sailed Windfall up to Baltimore and took third place in our division.  She maintained speeds in excess of nine knots for most of the race and finished ahead of many of the much larger vessels. The vessel that will become Windfall II took second place in the schooner race in 2000, and I hope to take her back up there in the fall.

I’d like to thank all the people who’ve crewed on Windfall over the years and helped with her never-ending maintenance. Thanks, also, to those who’ve sailed with us and recommended us to others. Thanks for the photos and all the compliments about how pretty she looked with her red sails in the sunset.

But life goes on!  The new vessel should be here in the next few weeks, sailing in Windfall’s wake.

(Rob Temple lives on Ocracoke and has sailed the Windfall on charter cruises from Ocracoke and Florida ports for several decades.)