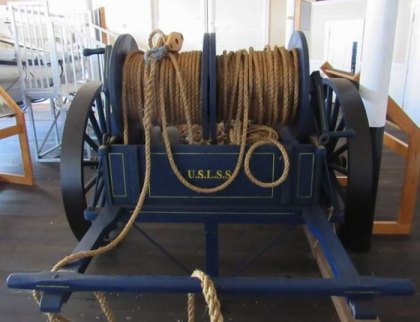 Story & Photos by Crystal Canterbury (Click here for Part I)

In 1894 a United States Life Saving Station (U.S.L.S.S.) was established on Portsmouth and became an important part of the community for the next 43 years. The U.S.L.S.S. is one of the buildings that can be explored, and inside you’ll be able to see the Crew’s quarters, rescue boats, rescue cart, and lookout tower. Philip Howard explained whoever was on lookout duty stayed in the tower for two-hour shifts, and was not allowed any distractions, not even a book. An unnamed Surfman described life at the Station by saying, “…it is hours and hours and weeks upon end of excruciating boredom interrupted occasionally by a few minutes of sheer terror!”

Located in the large room displaying two rescue boats, you’ll also see the rescue cart, as well as a detailed discription and large drawing of how the surfmen would save sailors from wrecks. The rescue cart weights about 1,000 pounds and looks like an over-sized wheelbarrow.

Philip asked us how we thought the cart was taken to the beach. I thought to myself, “Wild horses, of course.” That seemed like a reasonable guess considering how many wild ponies once roamed the Outer Banks, but I was completely wrong. The crew, ranging in number from six to eight men, transported the cart and supplies to the beach through extreme and harsh weather conditions.

Rope, a breeches buoy (a life-ring with attached shorts), a small cannon-like piece of equipment  called a Lyle gun (used to shoot rope to the distressed vessel), a sand anchor, and two large wooden poles called a “crotch” were kept in the cart. The sand anchor was placed on the ground to keep the crotch steady and upright, and once the Lyle gun had successfully gotten rope and the breeches buoy to the sailors, the surfmen began bringing them to shore one at a time. The crotch was designed to keep the sailor in the breeches buoy above the water to prevent drowning. On the shore, four or five surfmen would stand behind the crotch and pull the sailor in the breeches buoy to the shore, while the other two or three surfmen kept the rope circulating to the wrecked vessel.Once the rescue was complete, the surfmen packed everything back into the cart and pushed it back to the station. 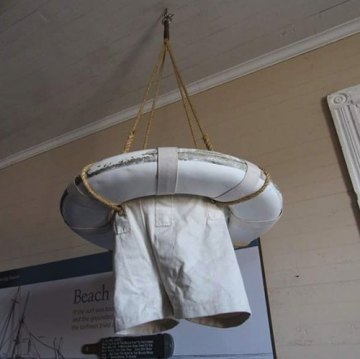 Beginning in 1894 and continuing for the next twenty-three years, the U.S.L.S.S. on Portsmouth operated from August 1 through May 31. Beginning 1917, the station was used year-round until it was placed out of commission on June 1, 1937.

Once exiting the Life Saving Station, we went to the left, walking along a dirt and sand trail that goes through a maritime forest. This trail eventually ends at the beach and along the way visitors will pass (and maybe even use) a compost restroom. Considering the remoteness of Portsmouth, said compost restroom really isn’t too bad. There are two stalls, both having toilet paper and hand santizer. Let’s be honest…it could worse…a lot worse.

Anyway, we were unable to venture to the beach on this trip, but not because of a lack of time or desire. The beach and mudflats had been flooded due to rain and also wind pushing the surf up, so we opted to stay on drier ground. Tucked back on another trail, which is connected to, but more narrow, than the one leading to the beach, is a Sea Captain’s Cemetery. The quarter-mile walk ends at a small clearing where two headstones are placed, and date back to the early 1800’s. You’ll see signs directing you to the beach, and then one labeling the quarter-mile stretch to the Captain’s graves. 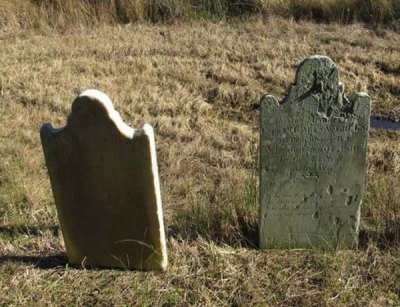 The Lionel and Emma Gilgo House (built circa 1926) was our next stop. Inside the grayish-blue cottage are photos of the Portsmouth families and their family trees. Some of the photos displayed were of residents who had gathered on another’s front porch. The people who lived in the small village would gather as family and friends, often playing music, as made evident by the photos. I asked Philip about what instruments were used to entertain. He said guitar, violin, and parlor organ most likely, plus possibly someone playing harmonica and triangle were used by the villagers to create music.

One notable and unexpected photo displayed in this home is one of Franklin Delano Roosevelt. In 1915 the thirty-three-year-old Assistant Secretary of the Navy was on Portsmouth Island for a visit. In the photo, the man wearing a black suit in the oxcart is Mr. Roosevelt. The photo was taken six years before he began experiencing symptoms from contracting polio. 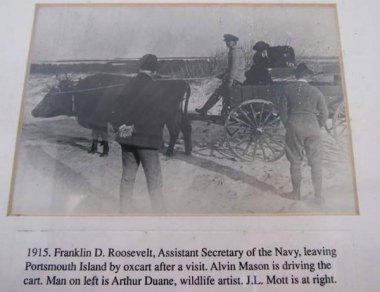 As we gradually made our back to the starting point, Philip showed us the Harry and Lida Dixon House (no date available) and Jesse and Lillian Babb House, which had been built around 1916. If you face the UMC, both yellow cottages are to the right and can be explored. The rooms are small, the doorways fairly narrow, and the ceilings low. In what would’ve been the living room in the Dixon House, a wood-burning stove is in place, and in the kitchen a well-water pump is still attached near the sink. This home also has a small room attached to its left side that looks like it was just kind of plopped down next to the main part of the house. We also got to look through the windows of the Ed, Nora, and Elma Dixon House (built circa 1910), located in the same open area as the previously mentioned homes.

The Washington Roberts House, which is across the lane from the three homes previously listed, is different from all the other homes in village for a couple reasons. To start, it has high ceilings and fairly big rooms. Its unique construction, which has allowed it to be one of the oldest standing homes not just on Portsmouth, but also on the Outer Banks, also makes it stand out. Built in 1840, the home has been dubbed the “Hurricane House” or “Storm House” because it was able to withstand high winds. During severe weather other Portsmouth residents would stay at the Washington Roberts House because it was such a sturdy structure. 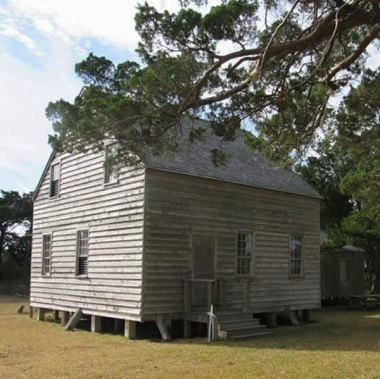 By now, we were all hungry. Some other people on the tour had gone to eat after visiting the Captain’s Graves, so after exploring for a bit longer, the rest of us were ready to unpack our lunches left at the Theodore and Anne Salter House. As we meandered away from the Washington Roberts House, which was to our left, we passed the UMC to our right, and went over the small wooden bridges. We again saw the George and Patsy Dixon House to our left, the schoolhouse and Cecil and Leona Gilgo House (off to our far left), and the Post Office before arriving at our starting point.

Once we were done eating, we still had time to venture out and do some last minute exploring. Behind the Theodore and Anne Salter House is the Jody Styron and Tom Bragg House (built circa 1927). The large home has a big “driveway” leading up to the property, which was quite muddy the day of our visit. A large tree has grown in the area immediately leading up to the covered porch, almost perfectly centered in front of the home. Going back toward the Post Office and down the lane to the left of the Walker and Sarah Styron House, more remnants of homes and cisterns can be seen. As I tried to capture some more photos, my camera’s battery was fully drained of power, so my camera shut off (insert sad face here: L). At this juncture (woe is me!!! I was being dramatic… to myself), I had no choice but to rely on my cell phone’s camera to shoot just a few more photos.

Just before 3 o’clock that afternoon, Donald Austin arrived at the dock. On our return trip I sat as close as I could to Austin, making sure to avoid any water that could spray up. Just as on our way to Portsmouth, Austin slowed the boat to tell us some interesting factoids. As we approached Silver Lake Harbor, he showed us the wreck of a shrimp trawler, part of which can be seen poking out of the water, and the story of how it got there. He also pointed out how the lamp-room and balcony of Ocracoke’s Lighthouse are off-centered depending on where you are when you observe it. He said this is due to the way the winding staircase and hatches at the top were designed and subsequently constructed. So the next time you’re visiting Ocracoke, check out the lighthouse from various locations. You’ll definitely see what Donald Austin is talking about. Or take a tour with Donald or one of the other Austins. If they’re like Donald, and I’m figuring they are, you’re going to have a fun, entertaining, and enlightening boat ride.

For more about Portsmouth Island, visit www.portsmouthnc.com. You’ll get all the necessary information required to contact the Austins.

I feel it’s right to mention and thank Philip Howard because he helped me with this article. I had neglected to record some of the names of equipment used by the U.S.L.S.S., as well as musical instruments used by the residents.