Ocracoke, like most isolated areas, has its share of supernatural stories.  The following was told to me by Larry Williams.  I include the historical and geographical details not only to make the story more understandable, but also to preserve a bit of island history.  I’m told this story is best read just before bedtime, when you are home alone and the waxing moon is casting unnatural shadows through your bedroom window.  Enjoy!

This is the story of Fannie Pearl MacWilliams Wahab,  born September 13, 1894 in the shadow of the Ocracoke lighthouse, and daughter of John & Elizabeth MacWilliams.

The Dream of Death

Modern-day visitors to Ocracoke Island are often surprised to learn that the village, and indeed the island itself, are in many ways very different from what they were not too many years ago.

Sometimes a newcomer to the island will hear a native talk about living “round creek”  or going “down point.”  The “creek side” of Ocracoke village comprises the area on the north side of the harbor that includes the Community Store, Howard Street, and the Methodist Church.  The “point side” takes in Albert Styron’s Store, the lighthouse and surrounding areas to the south.

The newcomer might even detect a little bit of good-natured competition between  “creekers” and “pointers.”  And it might take a while for him to understand the historical significance of the distinction.  After all, Ocracoke is a small village that even today has a population of fewer than 800 people.  What possible motivation could there be for identifying with one half of the village or the other?

Prior to World War II the harbor was called Cockle Creek (or often just “the Creek”).  Although a natural harbor, it was basically a wide, relatively shallow body that was joined to Pamlico Sound by a narrow inlet dubbed the “Ditch” by locals.  Most of the periphery of the harbor was low, marshy and wet, a perfect breeding ground for the ubiquitous Outer Banks mosquitoes.  On the east side, the Creek extended through the village by means of several “guts” that effectively divided Ocracoke into two distinct areas.

One gut lay more or less where Highway 12 now runs.  Another was situated farther south.  Both extended towards the bald beach .

Eventually simple foot bridges were built across the guts, and later on the Civilian Conservation Corps replaced these with more substantial structures, including handrails.  Even so, in the age before bicycles and automobiles, it could be a significant hike through soft sand paths from one side of the Creek to the other.  The walk was made even more difficult if you were carrying a small child, a laundry basket, or a mess of collards from the garden. 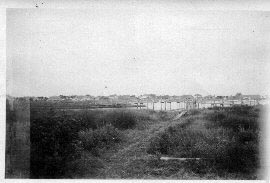 Although horses and carts were often used to carry larger items the earliest bridges would not accommodate a vehicle so wide.  So the driver was forced to detour around the guts by taking his team all the way out to the beach and back up the other side of the village.

When the Navy established their base here during the second world war one of the first things they did was dredge Cockle Creek so they could dock their vessels within the protection of Ocracoke’s natural harbor.  Much of the dredged sand was pumped into the surrounding wetlands, including the guts which were completely filled in.  Although locals still refer to this body of water as the Creek it was rechristened Silver Lake as a tourist promotion.

Before Cockle Creek was dredged Mr. John MacWilliams owned and operated the “Department Store” on the south side of the harbor.  This was, by Ocracoke standards, a large conglomeration of buildings near the water that included retail stores and a dock.  He and his family lived nearby.

Island native, Robert Stanley Wahab, was a teacher at the school and he and Fannie Pearl fell in love.  Soon Fannie Pearl left the island to finish her schooling in Marshalburg, NC.  The two lovers continued to see each other and were eventually married.  When Stanley was offered a teaching job in Norfolk, Virginia they moved to the city.  It wasn’t long before Fannie Pearl discovered that she was pregnant.  She was seventeen years old.

In 1912 pregnant women were expected to sequester themselves until their baby was born, so Fannie Pearl came back to Ocracoke to rest and wait. She stayed with Stanley’s mother Martha Ann Howard Wahab “round creek” in the house that Myra Wahab lives in to this day. Stanley remained in Norfolk, working, and regularly sent money home to his wife.

One morning Fannie Pearl awoke with a disquieting sense of melancholy.  She had had a disturbing dream during the night.

In her dream, she had died.  That was uncomfortable enough.  But, in the surreal realm of dreams, she was not only dead….she could see herself dressed in white, lying in a white casket sailing at night in a white sailboat.  The silvery-white full moon had recently risen above the horizon, casting its unearthly glow upon the dark water and reflecting from the white canvas sail.  Silently and somberly the sailboat of death glided across the smooth water.

Fannie Pearl found the dream so distressing that she felt compelled to share it with Martha Ann.  It haunted her throughout the day.

Tragically, that very night Fannie Pearl died.  Apparently her unborn child had died in utero and the now lifeless child within not only drained Fannie Pearl’s body of strength and vitality, but slowly poisoned her bloodstream.

In those days Ocracoke had no telephones.  Urgent messages were relayed by the Coast Guard via ship-to-shore radio. As soon as he received the terrible news Stanley sent his reply back.  Please, Stanley pleaded, do not do anything until I can return home.

Immediately Stanley made arrangements to find a way back home.  Before leaving Norfolk he purchased a beautiful casket.  Not that he disdained the homemade caskets the local island carpenters made for these occasions.  He just wanted the finest tribute he could for his young, deceased bride.

By the time the mailboat pulled up to the dock the next day with Stanley and the casket on board it was already afternoon.

Family and friends were beginning to worry.  They had respected Stanley’s wishes, but time was running out.  In those days there was no way to embalm a body on the island, so most burials were made within 24 hours of death.  By the time Stanley made it back home it was decided that no time could be wasted.  They must put Fannie Pearl in her new casket and inter her as soon as possible.

Of course Fannie Pearl had died “round creek” at Martha Ann’s home, but her family cemetery was “down point” near her father’s store.  By then it was dark.  It was a long way around the guts, out to the bald beach and back to the MacWilliam’s home place. The cart path was deep soft sand in many places, and the trek would have been difficult for many of the older folks.

The natural solution was to put the casket in a skiff and take her across the Creek for burial that night.  The boats were readied, the mourning party gathered at the shore, and soon they were off.

The freshly painted sailing skiff with the casket on board led the way.  Rowboats filled with family and friends followed behind.

Martha Ann was in the rowboat immediately behind the sailing skiff.  The funeral procession was hushed and somber.  Half way across the Creek Martha Ann had time to reflect on the last several days.  When she did she noticed the brand new white casket lying silently across the planks in the bright white sailboat with white canvas sails.  The water was slick as glass.  She looked up.  There rising above the horizon was the silvery white full moon illuminating the mournful procession.

Don’t forget the OcraFolk Festival & Howard Street Arts and Crafts Fair.  This will be all day, Saturday, June 9.  Hope to see you then.

Philip and all the folks at Village Craftsmen