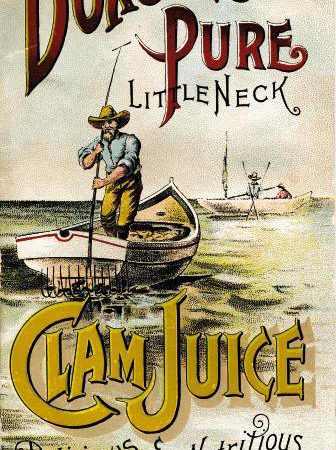 In 1865 at the age of 40 he established the first Doxsee Clam Factory in his hometown on Long Island. His canned clam chowder, whole clams, and clam juice were marketed under the name “Doxsee Pure Little Neck Clams.” 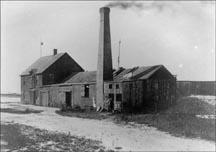 In the late 1800s, as the quantity of clams diminished in New York’s Great South Bay, one of James Harvey’s sons, John (b. 1868), began an independent ocean fishing enterprise that continues to operate today as the Doxsee Sea Clam Company.

The Doxsees built their new clam processing plant close to Pamlico Sound, on the southern shore of the “ditch” (the entrance to Cockle Creek) in Ocracoke village. It was, by island standards, a large operation. Local fishermen harvested clams, which they brought to the Doxsee’s dock. From there the clams were carried to a nearby building and steamed. The steamed clams were then taken to a long shed building and dumped onto wooden tables. Most of the island’s young, unmarried women, as well as several widows, worked at Doxsee’s picking clams. Empty shells were simply tossed out of the windows. 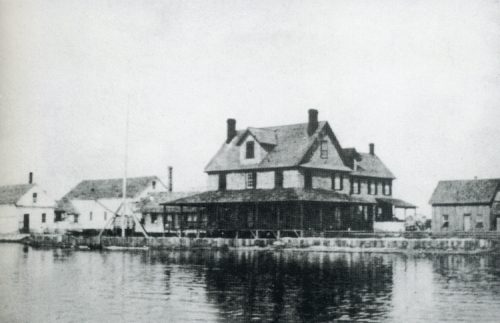 Alton Ballance in his book, Ocracokers (see pages 223-225), relates the recollections of Miss Lillian Jackson who worked at the factory when she was a young woman. She explained that old Mr. Doxsee (Henry) would walk around the building looking for clams that had been thrown away. If he saw any he would throw them back through the window.

Picked clams were placed in wooden boxes. From there they were dumped into a tub to be washed twice. Next the clams were packed in their own juice. Finally lids were affixed to the cans before being shipped off the island. They were labeled as quahaugs, and were marketed as originating in Islip, NY. 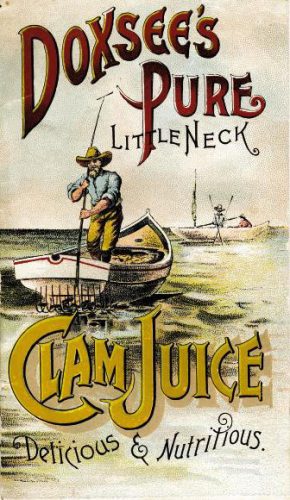 The Doxsee Clam processing facility also had several other buildings including a hunting lodge, boarding house, and a private dwelling for Henry and his family. The house, two stories tall with an attic, faced Cockle Creek. Doxsee’s became a focal point for island social life when square dances were held at the lodge.

The Doxsee family attended the Methodist Episcopal Church and were remembered as friendly, outgoing people.

Soon after their arrival on the island Henry and Carrie’s newly married son, James Harvey Doxsee (1876-1963), and his wife, Lottie James Doxsee, bought property from the Tolers on the north side of Cockle Creek, and built a two story home there, where the Harborside cottage sits today. They had ten children, more than half of whom were born on Ocracoke. Their fourth child, Henry Birdsall Doxsee, was born 1905, and died 1907. He was buried in the yard, and later moved to the Community Cemetery.

By about 1910 clams in Pamlico Sound had become over-harvested and the factory was soon shut down. The operation was moved, first to Sea Level, North Carolina, and then, by 1911, to Marco Island, Florida. At least three Ocracoke natives associated with the Doxsees accompanied them to Florida: Charlie and Sue Scarborogh and their nephew Thad Gaskins. Charlie and Thad, both accomplished carpenters, helped build the Doxsee’s facilities on Marco Island.

The property on Ocracoke was abandoned. By 1930 the house was gone and everything of value carried off. The processing buildings and other structures were in serious disrepair, windows and doors having been removed by unknown persons.

Shard of Doxsee Glass Jar Found on Ocracoke in 2006: 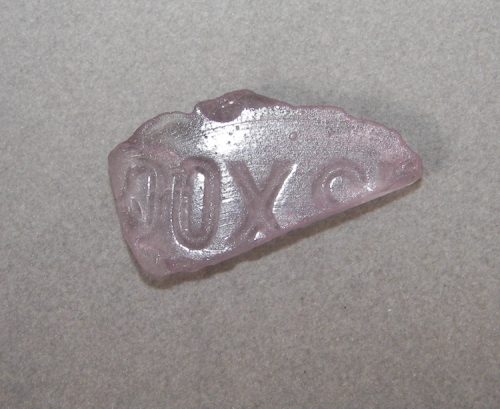 More information about the Doxsees and their clam factories can be found at the following web sites:

In September, 2009 Jan Auleta published a book, The Doxsee Legend, about the Doxsee family from Islip, NY.

A brief genealogy of the Doxsee family: