Over the years Ocracoke has been home to many a colorful character. Don Wood (1936-1998) was one of the more interesting. Don sold a marina in New Jersey and moved to the island sometime in the early to mid 1970s. Although he never had a “regular job” again, Don often remarked that he had to work harder than he ever had, mostly on self-discipline, just to be able to live self sufficiently without a “9-5” job.

Soon after arriving on the island Don built a modest home at Oyster Creek that he never quite got around to completing. And that did not concern him at all. His half-finished living room and workshop melded together seamlessly. Don’s table saw, sanders, hand tools, welders, and other equipment competed for space with tables, chairs, and floor lamps.

Don kept his homemade house boat tied up to his dock, and in the yard he parked an old school bus (loaded with hoses, wire, compressors, and assorted other paraphernalia).

Don often took his houseboat out into the sound for days at a time to get away from crowds, there to live au-naturel, feasting on fish, clams, and crabs he caught. Don’s houseboat, cobbled together with whatever materials were at hand, and anchored near Howard’s Reef, was a peculiar sight that often attracted vacationing boaters. Don quickly tired of these maritime sight seers, and developed a strategy of hurling empty oyster shells their way in order to keep them at bay.

Don found it more convenient to let visitors stay on his houseboat, rather than in his house, so he purchased a small port-a-potty.  He soon regretted that decision, as he frequently found himself struggling from the boat to the Park Service restrooms to empty the potty. In short order he tossed out the port-a-potty and brought back a five gallon plastic bucket. His guests, he realized, would be forced to empty that themselves!

Anything challenging or adventurous fascinated Don. Unwilling to lead a boring life, he sought out activities that stimulated his active mind and kept his agile body busy. Many Ocracokers remember looking up into the sky and seeing Don fly by in his ultralight airplane.

Don Wood over Pamlico Sound in his Ultralight: 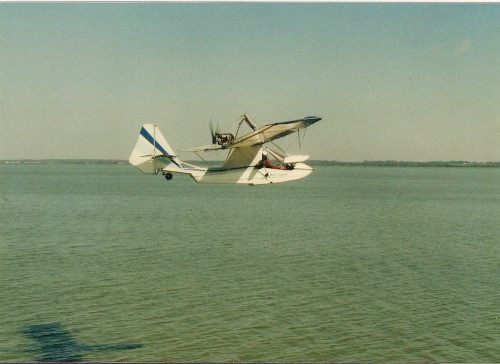 Don loved music, especially old-time “homemade” music. Whenever island musicians gathered just for the fun of jamming together it was not unusual to see Don, a broad grin on his face, adding rhythm and bass with his “gut bucket,” a galvanized wash tub, mop handle, and sturdy string.

Periodically he traveled in his bus to Mora, New Mexico, an unincorporated village near Taos, where he also owned property, and where his girlfriend lived. Mora suited Don in much the same way that Ocracoke in the off-season did. Both were quiet, isolated, and perfect for someone who was fiercely independent.

Don was also intelligent and talented…and particularly unpretentious. I seldom saw him in anything but well-worn tan coveralls or cut-off shorts. He was often bare footed, and the grime on his hands betrayed endless hours tinkering with outboard motors, transmissions, bicycles, and the like.

In spite of his occasional need for solitude, Don was exceptionally friendly and out-going. He was especially fond of old-time native islanders, and often invited Fowler O’Neal, my father Lawton Howard, and others to his house for homemade clam chowder and biscuits. 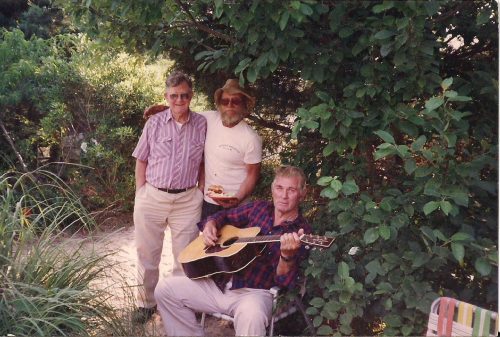 Don wasn’t a fastidious cook, nor did he have the most sanitized kitchen or work area. If he’d just finished hauling bricks for some outdoor project his biscuits turned out light red. If he’d recently been working on his outboard motor or bus engine his biscuits were a shade of gray.

Don loved to share stories, and he enjoyed hearing about island escapades and antics. Don laughed easily and heartily whenever he heard a good tale, and he almost always had one of his own to tell.

Don loved unconventional people, and told me more than once that Fowler (with his nautical tattoos, colorful language, and independent spirit), was the true “hippy,” unlike a tie-dye-wearing, college educated, pseudo-rebel.

Whenever Don purchased a new item (bicycle, outboard motor, or wheelbarrow, e.g.) he immediately painted it (with a brush) a nondescript, muddy brown. That way, he explained, he wouldn’t have to worry about anyone being tempted to steal it. Don’s ex-wife once described Don as “creative with ugly things.”

In the mid 1990s Don’s daughter, Stephanie, had the opportunity to house sit for Brigitta, a neighbor who was planning to be off the island for several weeks. The house was ideally arranged so that Stephanie could have the entire downstairs to herself. At the top of the stairs Brigitta hung a heavy curtain, both to conserve heat, and as a reminder about how the space was divided.

Don was living at his own house on Oyster Creek.

Near the end of November Don and Stephanie were both invited to a traditional Thanksgiving dinner with friends in the village.  The dinner was planned for mid afternoon, so Don took advantage of the morning to do some fishing. When he arrived at Stephanie’s, perched on his homemade double bike (two old beach cruisers welded together, side by side, with horizontal bars and a large basket in between), he reeked of fish.

Stephanie insisted that her father clean up before going to dinner. While Stephanie was getting ready, Don explored the house and discovered Brigitta’s large whirlpool bathtub upstairs just off the master bedroom. It was exactly what he needed.

Once he had settled down to enjoy the warm water and the powerful jets, Don noticed dozens of bottles of lotions, beauty creams, gels, and perfumes, as well as scented soaps and aromatic bubble bath oils.

When Don emerged from the tub an hour later, and walked down the stairs, Stephanie was amazed. Don looked like a million dollars…and he smelled like a French bordello! He had experimented with every scent and lotion.

As Don and Stephanie pedaled through the village a fragrant breeze of feminine aromas wafted behind them, turning heads as they passed.

It was a Thanksgiving to remember.

Thanksgiving was the occasion for another of Don’s favorite stories. It was with great delight that he told me about the time he was invited to two Thanksgiving dinners. Stephanie was not living on the island at the time, and, of course Don had dressed in his usual fashion (no one really expected anything different)…old tan coveralls and work boots. Late in the afternoon, after his second dinner, he was walking down Lighthouse Road, pushing his badly painted bicycle. With his long unkempt hair and shaggy gray beard he stood out, even on Ocracoke.

A well-to-do tourist couple had just left the dining room at the Island Inn where they had enjoyed a traditional turkey dinner with all the fixings. They had brought their leftovers with them, and were slowly driving down Lighthouse Road in their black Lincoln Continental when they spied Don.

The car stopped next to Don, and the window went down. The woman, impeccably dressed, with well-coiffed hair and fancy jewelry, handed the bag of leftovers out to Don. “Please take this, and have a Happy Thanksgiving,” she said with a note of compassion in her voice.

“Thank you,” Don replied, as he slipped his third Thanksgiving dinner into his bike basket, and ambled back home.