“Dear Sir: A 16 oz. BOTTLE CONTAINING NOTE, DATED 12 OCTOBER. 1956 was FOUND ON THE WINDBLOWN SANDS OF OCRACOKE,,ISLAND. SOUTH OF HATTERAS & EAST OF THE U.S. MAINLAND. IT WAS FOUND 14 OCTOBER 1957. Where WAS IT CAST FROM? PLEASE DROP ME A LINE…..BEST REGARDS. Bill Askren, General Delivery, Ocracoke, N.C.” 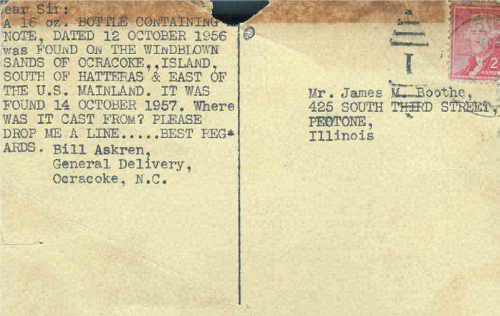 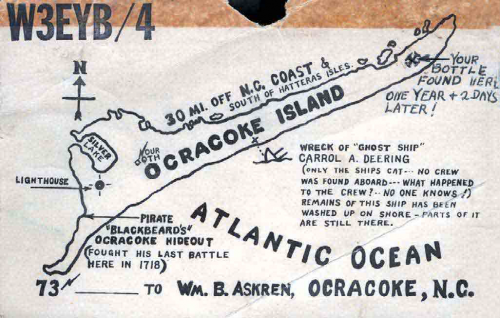 This was my first substantial clue towards discovering more about the life of Bill Askren, eccentric and mildly reclusive resident of Ocracoke Island in the late 1950s and early 1960s.

I’m not certain when I first laid eyes on Bill Askren, but I couldn’t have been more than twelve years old.

At that time Bill was about forty years old, tall and balding. He had driven an old car to the island, parked it on a sand hill, and lived in it. Later he moved into a small building on present-day Ocean View Road. He lived a simple, uncomplicated life. Whether he had accumulated some savings or relied on family money for basic needs, no one knew, but he also received monthly checks that often piled up in the Post Office. Islanders recall hearing that he had left a well-paying job at Martin-Marietta in the Washington, D.C. area.

Every summer Bill Askren seemed to become more eccentric. He camped out in an abandoned building near where the Pony Island Restaurant is today. He planted a vegetable garden nearby, and enclosed it within a crude wooden fence. In those days there was a community dump at the end of Sunset Drive, a one-lane concrete road built by the Navy during World War II. Bill frequented the dump nearly every day. Some islanders thought he was scavenging for food, but others realized he was simply gathering compost for his ever-more-luxurious garden. 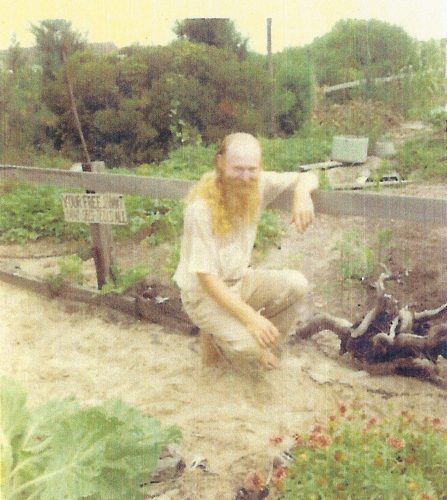 Bill stopped shaving, and ignored the island barber. As years passed, Bill’s red hair and beard grew longer and longer. He walked the island paths mostly after dark. Some islanders said he claimed to be a prophet. Younger children were fascinated by him, but also frightened. Like Scout and Dill in ”To Kill a Mockingbird,” they’d sneak up to Bill’s compound, then run away when he caught sight of them. Today, with the perspective of adults, they will tell you that Bill played the role of the idiosyncratic outsider, but he always added a wry smile to demonstrate that he was not to be feared.

Teenage boys soon learned that Bill Askren was quite an interesting character, with lessons to teach. He was intelligent and creative, if a bit quirky. He was a ham radio operator, and made contact with amateur radio enthusiasts throughout the world. He was also a tinkerer. To this day, a number of islanders will tell you about the crystal radios Bill Askren built and imbedded in cigar boxes and conch shells.

By the early 1960s Bill Askren had moved to California. But he stayed in touch with at least one islander, writing long, rambling letters laced with cosmic and metaphysical themes.

As time passed, Bill Askren’s connection with Ocracoke waned. Eventually, his pen-pal died. By the mid-1980s no one knew where Bill was, or how to contact him. His early life, career, family of origin, current whereabouts…all was lost. He simply disappeared…faded away like the diaphanous spirit he was.

All attempts to learn more about Bill Askren led to dead ends. Until 2014, that is….when I discovered the post card. It was published in “QST,” the official journal of ARRL [American Radio Relay League], the national association for amateur radio.

James Boothe, a ham radio operator, tells his story: “The year was 1956 and I was a young sailor aboard the destroyer USS Fred T. Berry DDE858. We were steaming back from a Mediterranean cruise and were about in the middle of the Atlantic, on our way back to Newport, Rhode Island. I got the position report from the charthouse and added it to a note that I wrote describing the ship and some particulars of myself, stuffed it in a bottle and heaved it over the side. One year after its launching, Bill Askren, W3EYB/4 was out beachcombing and found my bottle. He sent me one of his QSL cards [a post card confirming reception of a message by an amateur radio operator; QSL is code for “I acknowledge receipt of your message”], which showed a map of Ocracoke, and inked in a pirate’s X on the map side and described how he found it on the letter side. So that’s how I got my first QSL card.”

Discovering the post card confirmed the spelling of Bill’s surname, and provided a middle initial. His ham radio call sign prefix “W3” meant he had registered in Delaware, Maryland, DC, or Pennsylvania. Oral tradition that he hailed from the D.C. area was correct.

A quick Internet search led me to a page about a William B. Askren, born January 6, 1917, died April 7, 1999, and buried in Riverside National Cemetery in Riverside, California.

I immediately sent an email to the three individuals who had left brief messages on the web page. Within hours I heard from a cousin. My hunch was correct. William B. Askren who is buried in Riverside California turned out to be the same Bill Askren who had lived on Ocracoke.

William Bernard Askren (“Red” to his family and childhood friends) was born in Harrison County, Indiana, to John William Askren (1893-1939) and Elcye Glenna Eckart Askren (1894-1987). His father was employed as a school teacher, and later as a lawyer for the FBI. The family moved to Washington, D.C. in the 1930s. Before the decade ended, Bill’s father died of complications from surgery. As the oldest of four siblings, Bill helped care for the family. His youngest sister, Ethelda, was just six years old. 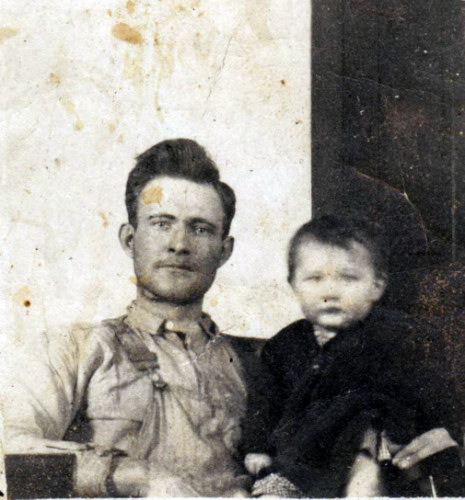 An inveterate tinkerer, Bill built his own camera when he was a young man. The following self-portrait survives. 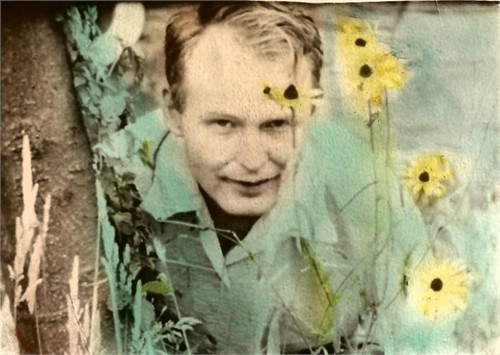 On September 4, 1946 Bill enlisted in the US Army. At the time of his enlistment he was twenty-nine years old, single, had no dependents, had completed four years of high school education, and had worked as an airplane mechanic and repairman. He served until May, 1947 as a private, first class.

How Bill Askren first learned of Ocracoke, or why he chose to move here, is still a mystery. He remained on the island about six or more years.

In the 1960s he moved to California to be closer to his family.

For more than three decades Bill stayed in California, spreading his message of peace, simple living, and healthy living. He biked most places he wanted to go, and as on the island, he continued wearing white, short-sleeved shirts, and simple flip-flops. His bicycle was usually adorned with placards communicating his musings. 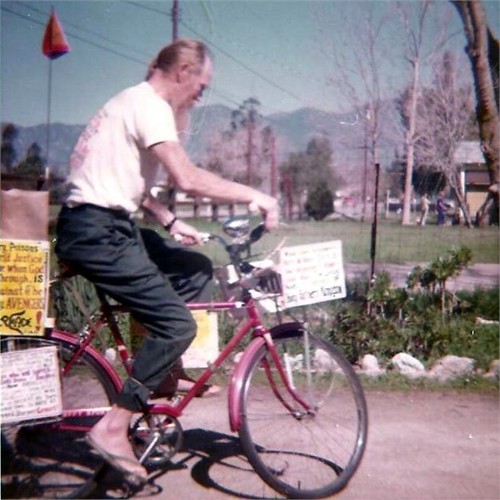 Islanders continue to remember Bill Askren as an eccentric and colorful character, a hippie before there were hippies, one who understood the importance of healthful vegetables and a genuine connection to the land. 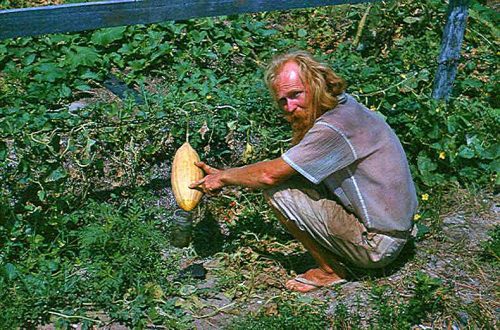 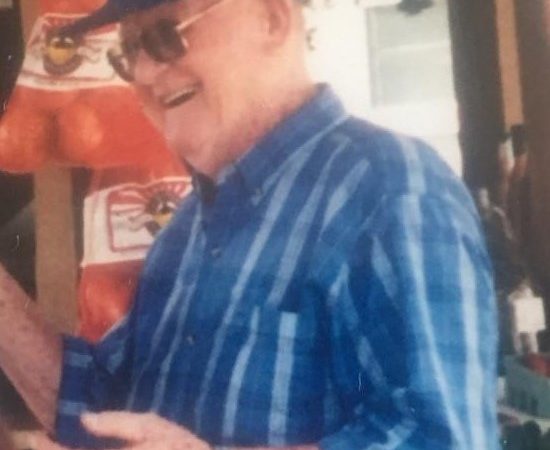