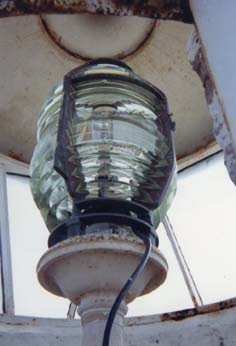 The most recognizable symbol of Ocracoke Island is the lighthouse.  This simple 75 foot tall white tower with a steady beam has been guiding mariners for one hundred and eighty-four years.

Built in 1823 at a cost of $11,359.35, the lighthouse continues to inspire seafarers, islanders, casual visitors, artists, and photographers.

In August, 2004 I published a basic history of the Ocracoke lighthouse on this web site.  You can read it here.

Captain Joseph Merrit Burrus was appointed lighthouse keeper in 1929, the same year that the beacon was electrified. The light was automated in 1954, eight years after he retired. At that time Clyde Farrow, Ocracoke’s last lighthouse keeper, was transferred to Washington, NC.

Captain Joe, as he was frequently called, came to Ocracoke from Hatteras.  His wife, Eleanor, affectionately called “Miss El,” was born on Hatteras as well. Captain Joe retired in 1946, after serving forty-three years with the US Lighthouse Service, his last sixteen years at Ocracoke.

During the severe winter of 1917-1918 much of Pamlico Sound was frozen solid.  Joe Burrus was stationed at that time on the old screw-pile lighthouse at Bluff Shoal, about seven and one half miles from Ocracoke.  According to old timers the cold lasted so long that for several weeks no supply boats could reach the light station on Bluff Shoal.  Eventually Captain Joe ventured out onto the ice and walked quite a distance.  Whether he was attempting to walk all the way to dry land, or just trying to relieve the boredom, is uncertain.  At any rate he turned back and remained at the lighthouse until the weather broke and food and supplies were finally delivered to him.

When the supply boat eventually made contact with Captain Joe the seaman reported that the lighthouse keeper had run out of food.  Of much more concern to Captain Burrus, however, was the fact that he had used up his supply of chewing tobacco.  Maybe that’s what he was after when he stepped out onto the ice that cold winter day.

By all accounts Captain Joe was a likeable, entertaining, and humorous Outer Banker.  Aycock Brown, in his November, 1941 issue of the Ocracoke Island Beacon reports that “Captain Burrus is a Republican (he likes to tell people that he is the only “out and out” GOP man on the island), but among his best friends are Congressman Bonner, Comptroller General Warren and others, all outstanding Democrats.”

According to Brown, “Capt. Burrus is a Hatterasman, but on the beach road at Ocracoke he has built a beautiful cottage where he will live with Mrs. Burrus and family after he retires.”

Captain Joe retired from the lighthouse service in 1946.  He lived in his new cottage until he died eight years later.  Captain Joe’s son, Oscar, inherited the house, and later Oscar’s daughter acquired it.  In the 1970s Ann Ehringhaus purchased the house and opened Oscar’s House Bed & Breakfast.  Ann claims that she still occasionally hears Captain Joe walking from room to room upstairs, especially on dark, cold winter nights when Ann is alone in the downstairs parlor.

Recently I discovered an Ocracoke story recounted by B.A. Botkin in his 1957 long-titled book, A Treasury of American Anecdotes, Sly, Salty, Shaggy Stories of Heroes and Hellions, Beguilers and Buffoons, Spellbinders and Scapegoats, Gagsters and Gossips, from the Grassroots & Sidewalks of America.

On page 62 Botkin tells the story he calls The Greatest Tobacco Chewer on Ocracoke Island.  When I discovered the reference to this story on the internet I knew I must find the book and read the entire story.  I was pleasantly surprised to learn that Botkin’s tale is an only slightly different version of a story about Captain Joe that I had heard from one of the island’s old time storytellers (although Botkin identifies his character as “Old Marty” this story is actually about Joe Burrus).

It seems that Miss El, or so it was told, chanced to look out her back doorway and noticed Captain Joe walking through the yard dragging something behind him attached to a string.  She wondered what he was up to when she realized that he was turning the corner into the side yard.  She walked into the parlor and opened the front door.  Here came Joe dragging that object behind him.  Next thing she knew he was again in the back yard.

When he rounded the corner into the front yard once more Miss El called out to him.  “What in the devil are you up to, Joe, traipsing around the yard hauling that old piece of string behind you?  The neighbors will think you’ve gone off your rocker.”

“El,” Captain Joe, replied, “I’ve lost my chewin’ tobaccy.  So I’ve decided to tie my false teeth to this here string and drag them through the yard.  If that tobaccy is anywhere in the vicinity these teeth will latch onto it, sure as my name is Joe Burrus.”

As a footnote, I am including several interior photos of the lighthouse, courtesy of islander, Dale Mutro.

At the top of the spiral staircase is a ladder, about 7 or 8 feet tall that leads to this hatch, the only access into the lantern. 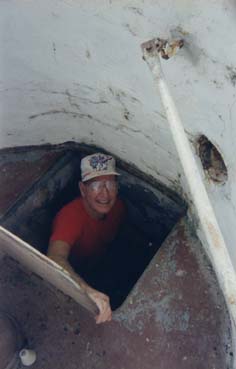 This four-bulb lamp changer operates automatically.  When the upright 250 watt bulb burns out the changer rotates 90 degrees and another bulb is turned on. 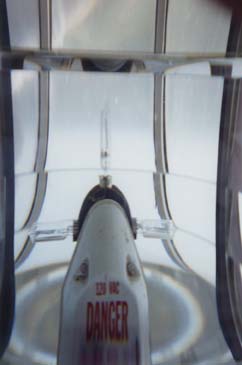 The only access to the outside balcony is a 3 foot tall door.  The iron railing is visible behind the man crawling through the doorway. 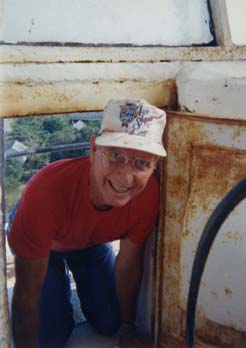 Perhaps you can imagine why the Ocracoke lighthouse is not open to the general public.  In addition to being almost two hundred years old, the small lantern, ladder, hatch, and 3 foot door do not lend themselves to visitors.