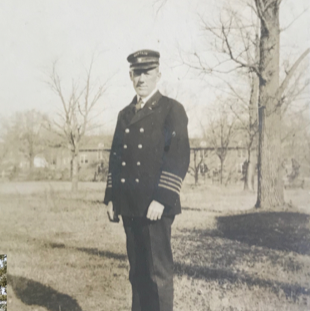 As early as 1785 records indicate that Ocracoke residents were concerned with education. On August 20 of that year the estate of Jobe Wahab made a payment of 4 pounds, 16 shillings to Henry Garrish* for “gradeschooling” his son, Thomas Wahab. Henry Garrish, who likely hailed from New England, had served as a private in the American Revolution.

On October 15, 1787, two years after arriving on Ocracoke, Henry Garrish married Elizabeth Howard, granddaughter of William Howard, Sr., colonial owner of Ocracoke Island. In March of 1788 Elizabeth’s father, William Howard, Jr., deeded 50 acres of land to his son-in-law. In 1790 Henry Garrish joined with four other men to deed one acre of their land for the purpose of erecting a lighthouse, although the beacon was eventually built elsewhere.

Henry and Elizabeth’s second child, James C. Garrish (ca. 1789 – 1833), was the father of Simon Garrish, Sr. (1834 – ca. 1870), and the grandfather of Simon Garrish, Jr. (1865 – 1935) who married Sarah Emeline Howard (“Ma Sade”).  In about 1888 Simon Jr. and Ma Sade built their home on a portion of the William Howard, Jr., tract on Howard Street. The house, which today is owned by Bob and Kathy Phillips, is currently known as “Miss Elsie’s.”** It was constructed from timbers salvaged from a shipwreck, and brought from the beach by horse and cart. The brick in the chimney was originally ballast on a cargo ship that had been “lightered” on nearby Shell Castle island.

Simon Jr. served as a surfman in the United States Life-Saving Service. 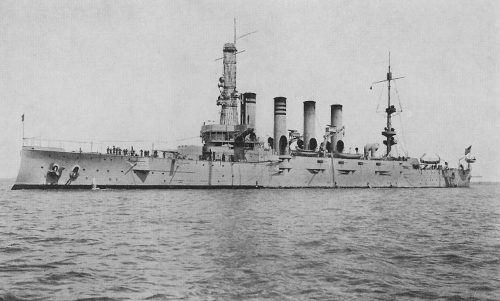 Myron later entered the Merchant Marine service as a steam vessel pilot with Wilson Steam Line in Wilmington, Delaware. Wilson Steam Line offered excursion trips across the Delaware River between Wilmington and Philadelphia. He eventually attained the rank of captain. In 1915 he married Agnes Scott (b. 1898), a Georgia native whom he met on Ocracoke. We don’t know the details, but on June 5, 1917, Myron claimed exemption from the draft due to “physical disability.” In 1919 Myron’s wife, Agnes Scott, died in Galveston, Texas, where Myron may have been working with the US Army Corps of Engineers.

By 1920 Myron had remarried, and was living in Norfolk, Virginia. His occupation on the census was listed as “seaman.” In about 1929 he had a modest bungalow built next to his family home on Ocracoke. The small cottage was built from lumber salvaged from the George W. Truitt, Jr., a four-masted schooner that came ashore in 1928. Capt. Myron Garrish died from tuberculosis in 1929, soon after his house was completed. His widow, Nora Casey, later married Ocracoke native, Thurston Gaskill. Bob and Kathy Phillips purchased the Myron Garrish cottage in 2017.

We are not sure when Myron Garrish met Agnes Scott, but we know that sometime around the turn of the twentieth century members of her prominent Georgia family discovered Ocracoke Island.

In 1870, Agnes Scott’s grandfather, Alfred McIIvaine Scott (1839-1876), and her granduncle, Col. George Washington Scott (1829-1903), both Pennsylvania natives, settled in Savannah, Georgia, after serving in the Confederate Army and later pursuing various business ventures in Georgia, Alabama, and Florida. Although the Scotts made and lost a fortune in cotton, G. W.’s businesses eventually flourished.

In 1889, concerned for the education of young women, Col. Scott offered a resolution among members of his church to “establish at once a school of high character.” Thus, the Decatur Female Seminary was opened in September of that year. The following year Col. Scott donated $40,000 “to provide a home for our school.” The school’s charter was amended and the name of the school was changed from Decatur Female Seminary to Agnes Scott Institute (later, Agnes Scott College), in honor of the donor’s mother, Agnes Irvine Scott.

Agnes Irvine Scott was born June 5, 1799 in Ballykeel, County Down, Ireland, to devout Presbyterians. When she was seventeen years old Agnes and her sister Susanna sailed to America with their mother fleeing famine and poverty as the result of massive crop failures in Ireland. They arrived in Alexandria, Pennsylvania, where relatives had previously settled. There Agnes Irvine met and married John Scott, Sr., a tanner and shoemaker who served as a major in the War of 1812, was a member of the Pennsylvania House of Representatives from 1819-1820, and served as a member of the 21st US Congress from 1829-1831. They had seven children.

Ralph and Carrie discovered Ocracoke Island in the early twentieth century. In 1913 Carrie Scott purchased thirteen acres of sound front land on which she built a summer cottage. Over the next several decades various members of the family ventured to the island. Ralph Bucher Scott (“Mr. Scott” to islanders) and his wife, Jennie Law Mallard, had seven children, Jennie, Billie, Clare, Agnes, Elizabeth, Carol Louise (‘Weeza”) and Allie (“Teenie”).

Ralph and Jennie’s daughters, Agnes (b. 1898) and Allie, who hailed from Kirkwood, Georgia, “an area of beautiful suburban villas” on the east side of Atlanta, were particularly smitten with the island. Agnes also fell in love with Capt. Myron Garrish. They were married in 1915. Agnes and Capt. Garrish had one son, Irvine Scott Garrish, who was born in 1916.

Tragically, Agnes Irvine Scott Garrish died in Galveston, Texas, in 1919 while her husband was working there. She was just twenty-one years old. Her body was brought back to Ocracoke and she was laid to rest in the Garrish family graveyard along Howard Street. 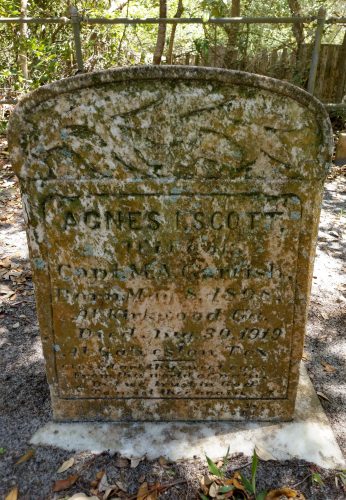 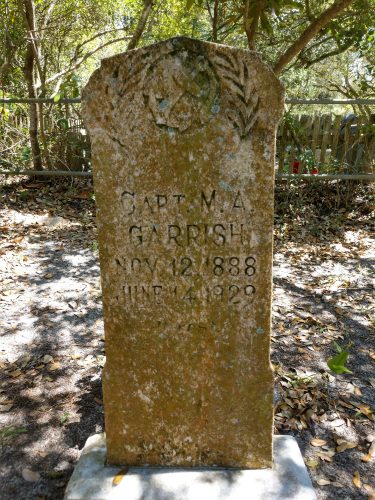 Irvine (often spelled Irvin) Scott Garrish, Myron and Agnes’s only child, grew up on Ocracoke with his grandparents, but moved to Philadelphia as a young man. He worked with the US Army Corps of Engineers, then returned home to serve as one of the first captains of North Carolina’s sound class ferries. He was later elected as Ocracoke’s first County Commissioner. NC Highway 12 (Irvin Garrish Highway) is named for him. He died in 1997.

Today, at least nine direct descendants of Myron A. Garrish and Agnes Scott (great-granddaughter of Irish-born Agnes Irvine Scott, namesake of Agnes Scott College in Decatur, Georgia), call Ocracoke home. Several others visit the island frequently and/or own property on the island.

*The Garrish surname is of early medieval English origin, and is one of a large group of early surnames that were created from the habitual use of a nickname. Garrish was the nickname used originally of someone who was considered to be wayward, wild, or capricious. It is derived from the Middle English word “gerysshe,” meaning fickle, changeable, or wayward, and is a derivative of “gere,” meaning “fit of passion.” The name is thought to be ultimately of Scandinavian derivation (see https://www.surnamedb.com/Surname/Garrish).