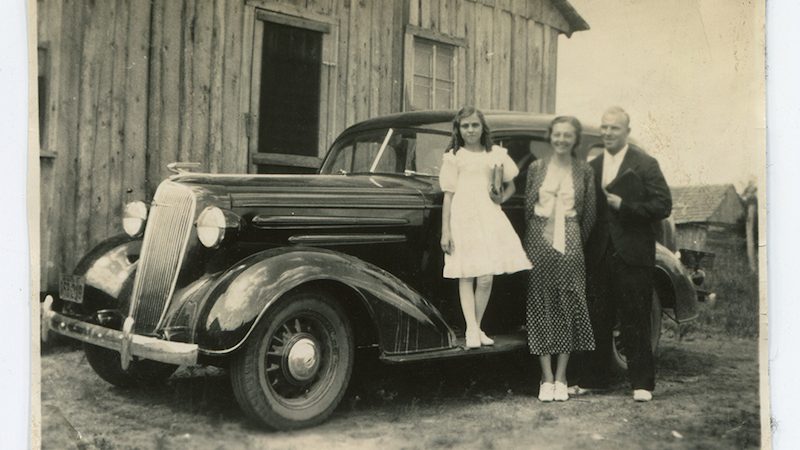 In the mid-1930s Pentecostal/Holiness evangelists began holding “preaching services” at the Ocracoke schoolhouse. In July, 1938, Miss Alice Austin, from Hatteras Island, and several others, including pastor/evangelist Percy Allen (P. A.) Wells and his child evangelist daughter Beatrice, came to Ocracoke to hold revival meetings. Elizabeth Styron (better known as Aunt Bett) offered the use of her front yard for the services. 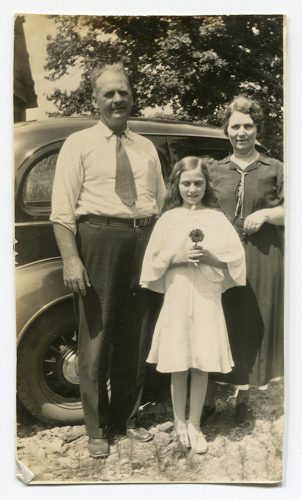 Although the revival lasted only two weeks, a seed was sown.  Sixteen islanders responded to the altar call.  After the revival, regular Sunday and mid-week services were begun, but now they were held in different people’s homes.  Eventually, as the congregation grew and the weather turned colder, Aunt Bett allowed the worshipers to close in her back porch for use as a church.  At first they had no pastor.  Services were held with lay leaders, although the evangelists returned for short periods to shepherd the fledgling group.

It wasn’t long before the new Holiness congregation recognized the need for a regular church building.  Aunt Bett’s back porch had quickly proved inadequate.  Again Aunt Bett demonstrated her new-found faith and donated the lot next door to her house. In 1940 Mr. Stanford Jackson, an octogenarian island carpenter and recent convert, offered to build the new church if the materials could be procured and several helpers found.

When the church was completed Miss Alice Austin returned to the island for the dedication, and preached the first sermon. Soon afterwards, the Rev. P. A. Wells returned with his wife Evelyn and their now-sixteen-year-old daughter, Beatrice. Rev. Wells was the church’s first salaried pastor. 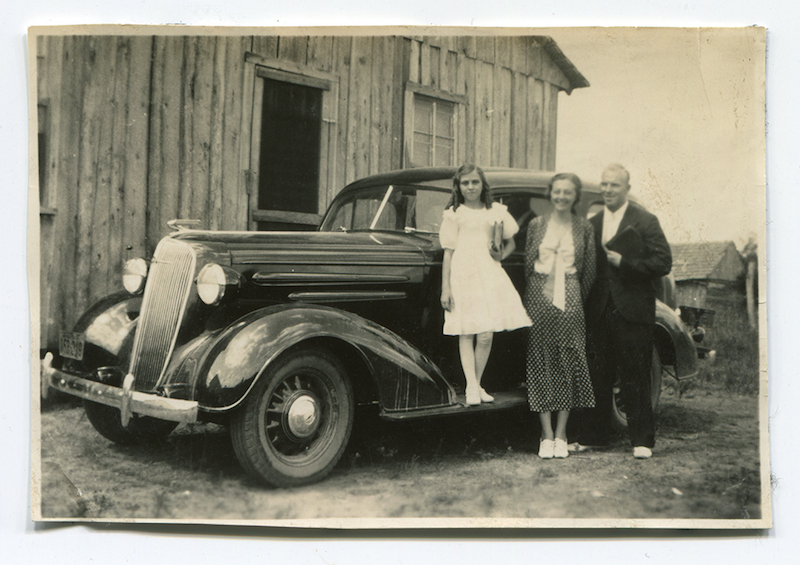 Rev. Wells, itinerant preacher from Oklahoma and West Virginia, and his family were already well known to the members of the Ocracoke church. In 1934/1935 Rev. Wells had not only preached at the Avon Assembly of God (it is now called Faith Life Worship Center) on Hatteras Island, but, as mentioned, he and his family had accompanied the first evangelists to Ocracoke.

In 1935, when Beatrice Wells was just nine years old, her father recognized her talent and allowed her to preach a sermon at the Avon Assembly of God. Beatrice continued to preach on the Outer Banks (at Avon, Salvo, Buxton, Hatteras, and Ocracoke) and beyond. She preached not only elsewhere in North Carolina, but also in Virginia, West Virginia, and Pennsylvania, as well as Canada. Thomas A. Robinson and Lanette D. Ruff in their book, Out of the Mouths of Babes: Girl Evangelists in the Flapper Era, quote an announcement from a Toronto church where twelve year old Beatrice Wells had recently concluded a crusade in 1938: “Beatrice is the most spirit-anointed girl evangelist we have ever heard, and we have had many of them in our tabernacle,” they enthused.

The first decades of the twentieth century were a tumultuous era in Europe and the United States. The end of World War I ushered in “The Roaring Twenties.”  “Flappers,”
young ladies who wore short skirts, bobbed their hair, smoked cigarettes, drank whiskey, and frequented jazz clubs and speak-easies, were discarding the last vestiges of the prim and proper Victorian Era. Especially troubling to traditionalists were these young ladies’ casual attitudes towards sex.

To counter the rise of the libidinous and brazen young flappers, Fundamentalist and Pentecostal Christian churches saw the emergence of “girl evangelists,” modest youngsters (often pre-pubescent) who modeled a wholesome and traditional lifestyle, and who preached lively sermons railing against the loose morals of the time, and against other “modernist” notions such as evolution. 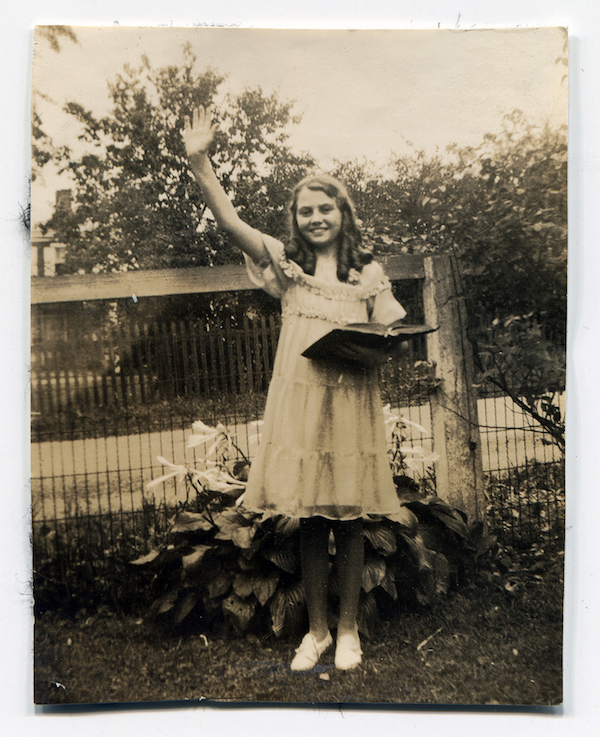 No one knows for sure how many child evangelists operated in the early twentieth century, but Beatrice Wells was one among hundreds. Two of the most famous were Udine Utley (1912-1995) and Betty Weakland (1916-2007).

Utley, who was converted at an Aimee Semple McPherson evangelistic meeting, began preaching when she was eleven years old. At the age of fourteen she preached to a crowd of 14,000 people at the Madison Square Garden. In her 20s she obtained a Methodist preacher’s license, and married. Shortly thereafter she had a mental breakdown from which she never fully recovered. Her husband had the marriage annulled. The last fifty-seven years of her life were spent in and out of convalescent homes.

Weakland was born into a Baptist family. Her father was an itinerant evangelist, and her mother played the piano. Betty began preaching at age seven, and claimed to have addressed more than six million people by the time she was fifteen. Unlike Utley, Weakland continued preaching into adulthood. She eventually left the revivalist circuit to pastor “The Betty Weakland Chapel” in Jamestown, New York.

Beatrice Wells never achieved the notoriety of Uldine Utley or Betty Weakland, but according to Robinson and Ruff, “Beatrice Wells could be taken as a template of the girl evangelist. She was Pentecostal; her father was a preacher; she started preaching around the age of nine, at first preaching in her father’s church, but soon expanding her preaching to other churches, though largely confined to Pentecostal congregations. She continued as a girl evangelist for thirteen years, until her marriage to Harold Kohl, a minister. The two became missionaries to Sri Lanka, the Philippines, and some other countries in the Far East.”

On his web site, http://girlevangelists.org/, Thomas A. Robinson writes, “[A] pastor who attributed his conversion to Beatrice recalls that at age nine Beatrice ‘preached a message on hell’ that he would never forget. Beatrice was not speaking at small, remote churches that could not draw one of the better known adult or male evangelists. She travelled the revivalist circuit that all revivalists travelled.” 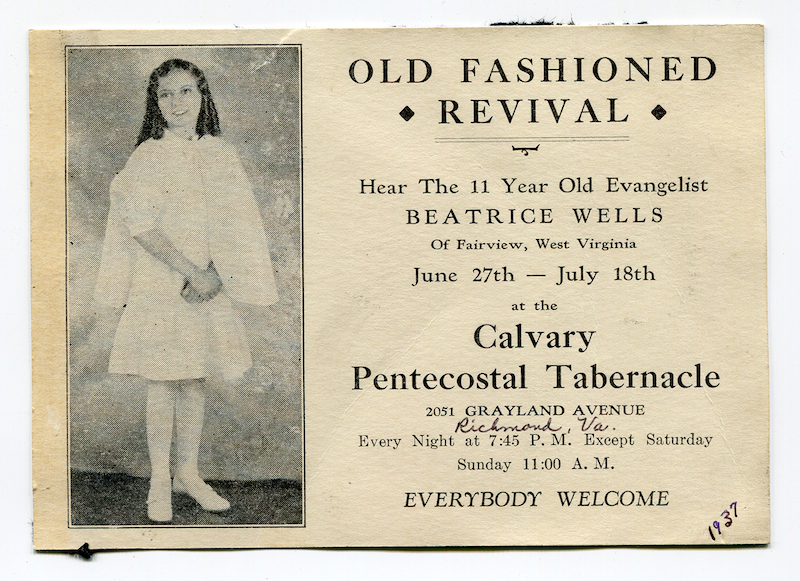 As I write, Beatrice Wells is living in Virginia, and approaching her 90th birthday. Her grandson, Jon Kohl, is working on a film documenting her career as a child evangelist. In October, 2015, I accompanied Jon to the home of native Ocracoke islander, Della Gaskill, a long-time member of the Ocracoke Assembly of God. Della is the only person living who says she remembers hearing Beatrice preach at Ocracoke. She recalls a beautiful young girl with ringlets who delivered rousing gospel messages that would rival those of any adult born-again evangelist.

(Many thanks to Jon Kohl, Della Gaskill, and Rev. Ivey Belch for personal information about Beatrice Wells and the history of the Ocracoke Assembly of God. All photos courtesy of Jon Kohl.)