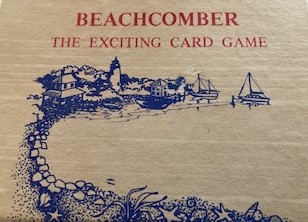 Recently a long-time visitor to Ocracoke sent me an email. She had received an unexpected birthday gift from a friend. It was a vintage card game produced in 1984. According to the enclosed brochure, the game was created by two “world sailors” who, “after rounding Cape Hatteras in a 60′ schooner [LOA 77′]…found refuge from a storm in Silver Lake Harbor on Ocracoke Island.” The game was copyrighted by Tao Lee Stettler. Questions and inquiries were directed to a post office box at Ocracoke, but that box had long since been rented to someone else.

My correspondent was unable to uncover any more information about the game or its creator, and asked me if I could shed any light on the mystery.

I immediately remembered Ralph and Jennifer Stettler, a couple in their mid-30s and mid-20s who, in the 1980s, lived on their schooner that was docked in Silver Lake. The game was only a vague memory, but Ralph and Jennifer were a more vivid memory. I counted them among a group of colorful individuals who found their way to Ocracoke in the 1970s and 1980s.

According to the game’s brochure, during the couple’s stay on Ocracoke “they found the Outer Banks lifestyle so unique that they were inspired to capture that feeling, and the game of BEACHCOMBER came to life.”  “Once you have been to the Outer Banks,” it continued, “it is easy to see how all of the adventures of BEACHCOMBER could happen to you, and will!”

The brochure goes on to explain that “[t]his is a card game in the vein of Mille Bornes. One’s goal is to collect the most shells (similar to mileage cards).

“The quantity of shells one can pick up is based on the mode of transportation (foot, bike, 4×4), and there are various problems that can slow you down (soft sand, no reservation, hot sand).

You must be on vacation to collect shells (similar to the Go card), and there are things that can frustrate the vacation (hotel bill, food bill, beach gear bill, and gas bill); bills can be addressed with money or ‘super solutions.’”

Ralph and Jennifer arrived at Ocracoke, as they recounted, on their 60’ schooner Mistress, a sailing yacht with quite a history. The Mistress was built in 1930 by Eastern Shipbuilding Corporation of Shelbourne, Nova Scotia, for George Emlem Roosevelt (1887-1963). George was a cousin of President Theodore Roosevelt and a prominent banker, philanthropist, railroad financier, and yachtsman. The Mistress was designed by Charles Sherman Hoyt, a “master helmsman, tactician, designer [and] raconteur.”[1]

Ralph Stetler purchased the Mistress sometime after G. E. Roosevelt’s death. After obtaining degrees in Business Administration and Comparative Literature at San Diego State University, Ralph worked in real estate in San Diego in the early 1970s. In 1972 he developed a company in San Diego devoted to teaching sailing and matching prospective crew members to sailing vessels that needed crew. The Mistress was the flag ship of the company.

In 1977, when Ralph was 30 years old, he entered his 47-year-old schooner in the Transpacific Yacht Race, a premier blue water yacht race starting from San Pedro, California, and ending off Diamond Head in Hawaii, a distance of around 2,225 nautical miles. The Mistress’s elapsed time was just under thirteen days. Although the Mistress did not place, it must have been a memorable experience. Five other sailboats were dismasted in a single night of stormy weather.

Ralph remained two years in Hawaii where he met Jennifer Lucas. Together they sailed back to California, and then took the Mistress into the waters of Mexico and Central America, eventually passing through the Panama Canal.

In Panama they learned about molas, a traditional textile craft made from layers of bright colored fabric that are stitched and cut using applique techniques to create patterns and pictures. Originally created for blouses and skirts, they were made by the women of the Kuna tribe in the San Blas islands. Later, rectangular mola panels were created primarily for display and sold to tourists. Ralph and Jennifer purchased a number of molas and financed part of their travels by selling them in ports as they sailed into the Caribbean and up the east coast of the United States.

After the storm forced the Mistress into safe harbor in Silver Lake, Ralph and Jennifer discovered that Ocracoke Island life suited them just fine and they settled in for a while. Jennifer secured work in the village. Ralph, a self-described Taoist, hosted open-air philosophical discussions on the dock beside his sailboat. After several months, Ralph and Jennifer were married in a small ceremony in the Island Inn. Their first child, Tao Lee, was born during their two-year sojourn on the island. It was during this time that Ralph and Jennifer created their card game.

A number of islanders have beautiful and colorful molas by which to remember the Stettlers. Many also remember the green pennies that circulated among village shops and stores in the 1980s. Needing ballast for the Mistress, the skipper discovered that pennies were cheaper than lead. As a consequence, many pounds (and many dollars’ worth) of copper pennies were thrown into the bilge. It was a simple matter to scoop up a handful of corroded pennies whenever Ralph and Jennifer needed a little extra change.

Eventually, the Stettlers decided to seek other adventures. With help from experienced sailor and Ocracoke islander, Al Scarborough, they took the Mistress, with a draft of almost ten feet, through the tricky and sometimes treacherous channels of Ocracoke Inlet without incident and up to Solomons Island, Maryland. The boat was by then more than a half century old and in need of some repair, but a bilge pump kept the leaks in check during the journey.  For the next several years the Stettlers operated a waterfront restaurant in Maryland.

In 1987 Ralph sold the Mistress. He and Jennifer moved to Washington state where their second child, Ellen, was born. Jennifer pursued a degree in Spanish and Physical Education while working evenings. Ralph worked as a consultant and operated a small business in both the United States and Canada.

Ralph died in 2006. As mentioned in his obituary, he was passionate about life and knowledgeable in a variety of often complex subjects. He loved chess, a variety of music, traveling, blue water sailing, other hobbies, and above all, his children. It was said that “those who sailed with him as captain” would not forget him, and that “he had a way of doing things that was just somehow different than how anyone else would do it.”

As of this writing Jennifer continues to live in Washington state, but with many fond memories of adventures aboard the schooner Mistress, and of two formative years on Ocracoke Island.

You can read more about the history of the Mistress and its current life at the following web sites: