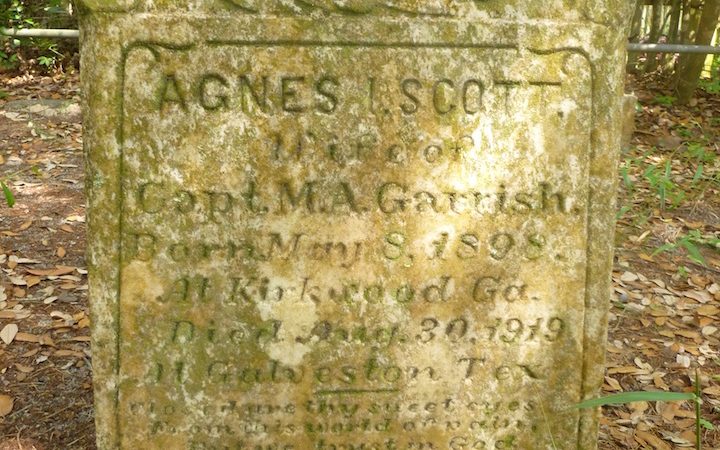 Agnes Scott Garrish was just 21 years old when she was laid to rest in one of the many graveyards along Howard Street. She died in Galveston, Texas in 1919, likely as a result of the Spanish Influenza, the deadliest pandemic in human history, which killed 50 million people worldwide.[1] 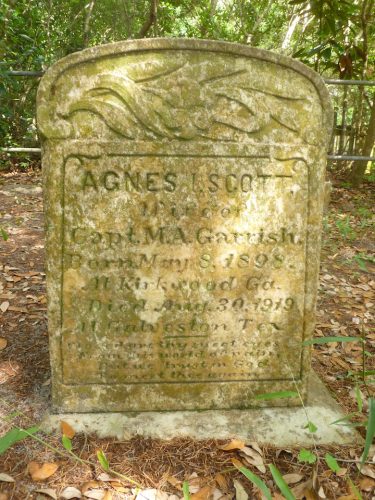 Agnes Scott’s tombstone indicates that she was born at Kirkwood, Georgia (according to a nineteenth century tour book, “an area of beautiful suburban villas” on the east side of Atlanta) in 1898.  Her marker reads:

Visitors to Ocracoke have occasionally asked if she is related to the person for whom Agnes Scott College in Decatur, Georgia is named. Oral history suggested that there was a connection, but details were sketchy.

In 2004 I contacted Agnes Scott College seeking information that might solve the puzzle. I received a prompt reply suggesting no connection with the college’s namesake. The clear message was that I had been misled. “Unfortunately, your Agnes Scott may not be related to our college’ namesake. It seems there are hundreds of Agnes Scotts throughout the country,” I was told.

I soon discovered that, to the contrary, Agnes Scott of Ocracoke was, indeed, the great-granddaughter of the woman for whom the college was named.

The college was founded in honor of Agnes Irvine Scott, a Scots-Irish immigrant wholly dedicated to her Presbyterian church and committed to its values “who upheld a strong sense of integrity and intellectual curiosity. Her son Col. George Washington Scott was the college’s primary benefactor….”[2]

On February 22, 1951 the city of Decatur, Georgia dedicated Col. G.W. Scott’s homeplace as a memorial park. In his address on that occasion, Wallace M. Alston, Vice President of Agnes Scott College, outlined the institution’s history.

Agnes Irvine was born June 5, 1799 in Ballykeel, County Down, Ireland to devout Presbyterians. When she was seventeen years old Agnes and her sister Susanna sailed to America with their mother, Mary Stitt. 1816 has been described as the “Year Without a Summer.” Much cooler temperatures, combined with heavy rains, caused massive crop failures in Ireland and elsewhere in the northern hemisphere. Famine and poverty followed.

During their sea passage Susanna fell ill and died.

John Scott, Jr. (1824-1896), a lawyer, followed in his father’s footsteps and served in the Pennsylvania House of Representatives in 1862. He was later elected US Senator from Pennsylvania, and served from 1869-1875.

George Washington Scott (1829-1903) left Pennsylvania in 1850. He traveled through Georgia and Alabama on his way to Florida, seeking a cure for ill health. In 1852 he established a mercantile business in Tallahassee, and soon after purchased a plantation there.

After returning to Alexandria, Pennsylvania in 1854 to visit family and friends, G.W. Scott met and married Rebekah Bucher. Together, they returned to Tallahassee. During the War Between the States, G.W. Scott “shouldered his musket with a saddened heart, but with a resolute front, and went with the Tallahassee Guards to the battle line.”[3]  He served with distinction, and advanced to Colonel.

In 1870 George Washington Scott moved to Savannah, Georgia with his brother Alfred, where he made and lost a fortune in cotton. Six years later Alfred, also a veteran of the Confederate Army, contracted yellow fever and died, leaving behind his wife, Clare Maria, and two children, Ralph Bucher (b. 1868) and Carrie Irvine (b. 1870). In 1877 G.W. Scott left Savannah and settled in Decatur, Georgia. There he founded the George W. Scott Fertilizer Company.

In 1889, concerned for the education of young women, G.W. Scott offered a resolution among members of his church to “establish at once a school of high character.” Thus the Decatur Female Seminary was opened in September of that year.

The following year Col. Scott donated $40,000 “to provide a home for our school.” The school’s charter was amended and the name of the school was changed from Decatur Female Seminary to Agnes Scott Institute, in honor of the donor’s mother, a woman “who upheld a strong sense of integrity and intellectual curiosity.” During the first fourteen years of the Institute’s existence Col. Scott donated more that $175,000 to support the school.

In 1906 the college was chartered as Agnes Scott College and became the first institution of higher education in Georgia to receive regional accreditation.

According to their official web site, “Agnes Scott College was established in 1889 with a distinctive mission: to educate women for the betterment of their families and the elevation of their region. Today, that mission has evolved….”

“AGNES SCOTT COLLEGE educates women to think deeply, live honorably and engage the intellectual and social challenges of their times.

Agnes married Ocracoke sea captain, Myron A. Garrish (1888-1929). Unfortunately, Agnes Irvine Scott Garrish died in Galveston, Texas when she was just twenty-one years old. She was survived by her husband and one son, Irvin Scott Garrish.

Today, at least nine direct descendants of the Irish-born Agnes Irvine Scott, namesake of Agnes Scott College in Decatur, Georgia, call Ocracoke home. Several others visit the island frequently and/or own property on the island.

[3] From an October 9, 1903 editorial in the Tallahassee, Florida, newspaper, as quoted by Wallace M. Alston in his dedication address.